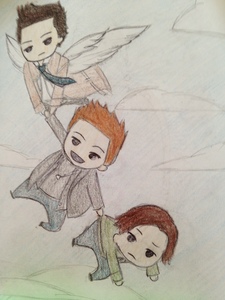 This will prevent VMom from sending you messages, friend request or from viewing your profile. They will not be notified. Comments on discussion boards from them will be hidden by default.
Sign in to Goodreads to learn more about VMom.

VMom is currently reading
Firing of the Crucible: Heros are not born. They are made.
by Michael Eves Shaffer (Goodreads Author)
bookshelves: currently-reading

See all 9 books that VMom is reading…

“The idea that freedom is merely the ability to act upon one's whims is surely very thin and hardly begins to capture the complexities of human existence; a man whose appetite is his law strikes us not as liberated but enslaved.”
― Theodore Dalrymple, Our Culture, What's Left of It: The Mandarins and the Masses
13 likes

“In the psychotherapeutic worldview to which all good liberals subscribe, there is no evil, only victimhood. The robber and the robbed, the murderer and the murdered, are alike the victims of circumstance, united by the events that overtook them. Future generations (I hope) will find it curious how, in the century of Stalin and Hitler, we have been so eager to deny man's capacity for evil.”
― Theodore Dalrymple, Our Culture, What's Left of It: The Mandarins and the Masses
8 likes

“The purpose of those who argue for cultural diversity is to impose ideological uniformity.”
― Theodore Dalrymple
40 likes

“Original sin—that is to say, the sin of having been born with human nature that contains within it the temptation to evil—will always make a mockery of attempts at perfection based upon manipulation of the environment.”
― Theodore Dalrymple, Our Culture, What's Left of It: The Mandarins and the Masses
4 likes

Polls voted on by VMom