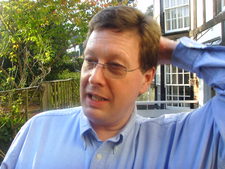 “One must not think slightingly of the paradoxical…for the paradox is the source of the thinker’s passion, and the thinker without a paradox is like a lover without feeling: a paltry mediocrity.”
― Soren Kierkegaard
tags: paradox
256 likes

“The possible ranks higher than the actual.”
― Martin Heidegger
111 likes

“Everything we call real is made of things that cannot be regarded as real.”
― niels bohr
tags: reality
147 likes

“The object of this Essay is to assert one very simple principle, as entitled to govern absolutely the dealings of society with the individual in the way of compulsion and control, whether the means used be physical force in the form of legal penalties, or the moral coercion of public opinion. That principle is, that the sole end for which mankind are warranted, individually or collectively in interfering with the liberty of action of any of their number, is self-protection. That the only purpose for which power can be rightfully exercised over any member of a civilized community, against his will, is to prevent harm to others. His own good, either physical or moral, is not a sufficient warrant. He cannot rightfully be compelled to do or forbear because it will be better for him to do so, because it will make him happier, because, in the opinions of others, to do so would be wise, or even right. These are good reasons for remonstrating with him, or reasoning with him, or persuading him, or entreating him, but not for compelling him, or visiting him with any evil, in case he do otherwise. To justify that, the conduct from which it is desired to deter him must be calculated to produce evil to someone else. The only part of the conduct of any one, for which he is amenable to society, is that which concerns others. In the part which merely concerns himself, his independence is, of right, absolute. Over himself, over his own body and mind, the individual is sovereign.”
― John Stuart Mill, On Liberty
tags: ethics, force, happiness, harm, harm-principle, law, liberty, morality, obligation, prevention, principle, rights, sovereignty
77 likes