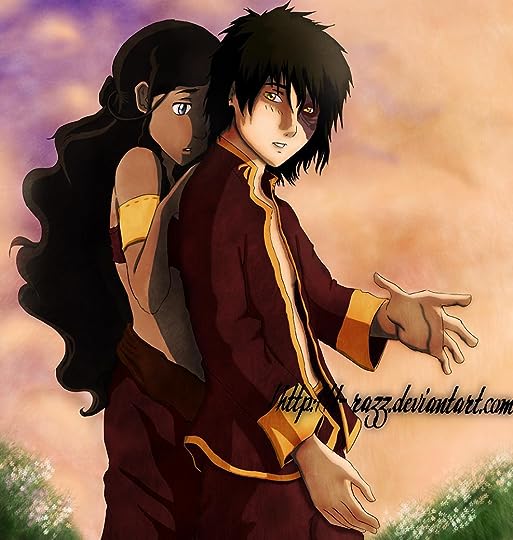 Katara and Zuko would be a really good couple for a while I thought they would put them together...

Zuko and Katara, all the way! In the first season, when Zuko had his weird ponytail, and my sisters were obssessing over the idea, I thought it was crazy, but in season two, I started to lke Zuko/Katara. And I really don't think it would be much of a mix up. The creators were totally building up Zutara (the name for the Zuko/Katara relationship), but decided to give the prize to Kataang. I mean, come on! Zutara had everything! Comparing it to an icecream sundae, Zutara and Kataang started out as vanilla icecream. At first, they put some chocolate on Kataang, but then they focused on Zutara, and put on hot fudge, caramel, bananas, nuts, whipped cream everything you'd want in icecream. Then, they had the cherry. They looked at the plain, boring Kataang sundae which only had vanilla icecream and some chocolate on it, and decided to give the cherry to that icecream because it didn't have as much as the other. It's exactly like Zutara and Kataang. They built up Zutara, and it was amazing, but then they decided to give the kiss to Kataang because it didn't have as much glory as Zutara. Besides, Aang acts so much younger than Katara for her to like him. It's too cheesy.

and yah i totally acgree with everything but the ice cream...

lk at the truth about season 4

Too bad Zuko's with Mai...I think he should be with Katara instead.

yeah... I watched the episode the Desert recently, and I realized how awesome Avatar really was!! (Lately I've been on an anti-Avatar rampage because of the stupid ending)

It's true, although Avatar had one of the worser ones. I don't really know why... maybe because it was cheesily happy and Aang ended up with Katara and Zuko was with Mai... Grr...

I know!! D: I was a hardcore Zutara fan, too! And what was with all the randomness in that season? Katara learned blood bending and it was awesome, but she only used it on that idiot that one time, and he wasn't even the person she was looking for!!

RANDOM: i LOVE sokka and suki
even though sokka and yuai (idk how to spell, sorry)
was a good couple.... to bad she turned into the moon spirit.... anyway, sokka and suki is UBER cute-tastic. and with katara... i guess i'll have to go with jet.... hahahahahahaha i know thats random and i know he betrayed her and i know he was a jerk (until he died) and thats my point. jet payed the ultimit (speeling, idk) price to gain kataras trust, and i think that is SO romantic. :3 and besides, i like toph and zuko... i know im weird like that but i think it is an amazing couple and i think aang should just worry about being the avatar and nothing else...
that is just MY opinion :3

Lindsay wrote: "Zuko and Katara, all the way! In the first season, when Zuko had his weird ponytail, and my sisters were obssessing over the idea, I thought it was crazy, but in season two, I started to lke Zuko/K..."

kataang sounds kool, but zuko and katara all the way!!!!

How would that work? Would Katara like living in the Fire Nation? I think Kataang is better, because there's none of that awkwardness. I mean, Zuko's still probably thinking, "Remember when you hated me so much? And you were threatening me?"

I do think Zuko and Mai are a terrible couple though. I mean, "I love it when you hate the world?" Really?

Sokka and Suki are cute. End of story.

Okay, the last episode had Toph and The Duke hugging. It's very small, so you might miss it. But at the end, when Sokka and Katara are being reunited with their dad, I swear I saw them hugging.

whose the duke again??

yeah, with Haru and the kid in the wheelchair. It was hilarious when Katara came out of a house and said, "I have something to tell everyone." Or something to that effect. And then Toph says, "I knew it! You DID have a secret thing with Haru!" And everyone looks at her like she's crazy.

oh the kid in the whelchair and how they "fly"

Yeah, him. What's his name?

It's in the episode right before the play about them. I forget what it's called.