note: This topic has been closed to new comments.
40 views
Feeling Nostalgic? The archives > Dang! You think you know a guy...(HS graduation dates & concert redux)

I only want friends that harbor secrets and surprises.

Scratch that. I only HAVE friends that harbor secrets and surprises.

No, I've had some friends reveal some intense surprises. I have a close friend, one who many people thought had it all together, etc., tell me he had cheated on his wife multiple times with prostitutes. He's worked through it, etc. but I think of him every time a politician gets busted.

I think all of us have secrets. I don't like explaining goodreads to most of my friends...so I guess this is a secret. Shh.

i like pearl jam the first 20 minutes they came out and then they did that eddie and the cruisers song thing and totally fell out of like with them. now nirvana gets better each time i hear an old song teen spirit makes me sorta wanna kick a hole in an amplifier.

I actually think I'm going to be able to get quite a few people into Good Reads. I sent out invites yesterday and three people have already joined. We'll see.

But yeah, I take a long time to get really comfortable/close with someone, so I have a lot of people I'd almost consider friends, who I don't actually know that well. I have one very close friend, though, who I think once in a while tries to keep a secret, but they almost all eventually come out. My last ex, though, is now one of my best friends. We became very close very fast and had a pretty intense relationship. I know he trusts me more than he trusts most people, and still, every once in a while he'll mention something that makes me go, "I can't believe you never told me that!"

I don't think there's any such thing as full disclosure. Sometimes people intentionally hide things and sometimes they just never come up, but between the two, it's a pretty sure bet that there will always be some surprises. 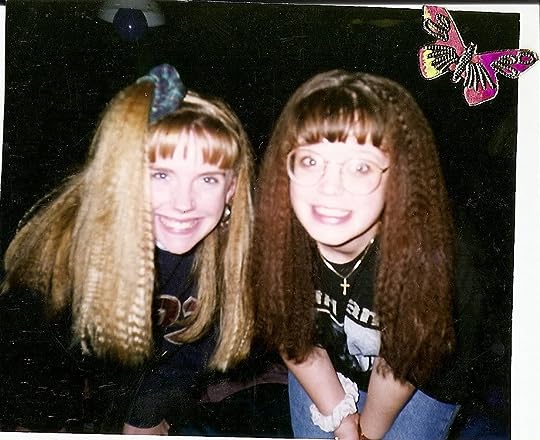 On the back it said, "9 out of 10 children prefer crayons to guns." I have no idea if that's true or what, but I sure loved it at the time!

yes! best pic i have seen in awhile. i had my senior pic taken in a Queen concert tee shirt. crimper was working O.T. that night. this pic reminds me of the song Stacey's Mom

I love my huge glasses.

Mod
How old were you in 1995 Montambo? You look young here, but I thought you were the same age as me. I graduated high school in 1996.


Danielle, I'm like you. I have many friends, but few who are so close that there aren't many things they don't know about me. My two closest friends have seen me through my darkest days, and I just couldn't not tell them some things. In general, though, the people that I know only know me from the outside, and I let them believe what they may about me. I used to go around telling every new friend I met all that I could about myself. But in the past ten years I've discovered that people come and go, and the more I disclose about myself, the more they take with them about me when they go.

i was gonna put a pic in here from when i was about that age but i didn't know how to paste one. you will just have to trust me that i was a total dork

I looked really young for my age.

how the heck do you paste in a pic?

Except that first you have to locate the picture on the internet and right-click (or ctrl-click on an apple) and then select copy image location.

Mod
Seriously, peepers, I don't have a scanner at home. Do you all? How do you do this?

Something tells me you'd still strike that same pose today.

I'm waiting for Gus to chime in with when he graduated from high school.

Our class song was Garth Brooks' The Dance. Thank god it beat out Whitney Houston's Greatest Love of All. The Dance is way cooler.

yikes. i wore a tux like on My Cousin Vinny to the prom in high school. that tells you how old i am

uh...mindy...i saw Freddy Mercury in 1980 live in concert. when i was in high school

i respectively hand over the cane to jim

I also graduated in 1989. I didn't go to my prom, sported a mullet, and saw Genesis at Giants Stadium. Hah!

Heidi, have you been talking to my wife again? She loves to call me an old geezer.

My first concert was Cyndi Lauper in New Orleans (where I was living at the time). Opening act - The Bangles.

Montambo, I saw Pearl Jam in concert, too. I was in college... prolly around 92ish.

what was the last concert you went to?

I think there's a thread about concerts, isn't there?

Before that, I saw Joan Jett at Riverfest Amphitheatre (she was awesome) - an outdoor concert venue.

I saw Brandi Carlile with the Indigo Girls, and yes, she was fabulous, but I DO know a lot of Indigo Girls songs, and I thought they were just amazing. And then the finale was "Closer to Fine," and Brandi and the twins came out and joined them on that one, and it was... oh, I'm choking up right now just thinking about it.

Mindy, I was told the Indigo Girls are great in concert! One of the gals was v. sick, though... as in she-should've-been-in-a-hospital sick. Some of the gals I was with who are diehard fans told me that it affected their performance and that it was unusual. The concert itself had a great energy... it was sooo different from what I've experienced at other concerts. Maybe it was the audience?

OH! I forgot about the Blue October concert... I saw them after Joan Jett. They were great, too.

You must've seen them not too long after I did, Heidi, b/c Amy was sick during the show here, too, but it wasn't so bad that her performance was affected. Lol, her voice did crack on the intro to one song (which begins with just her voice kinda shouting-singing something), so she had to restart it. It was CUTE! All this time I have NEVER thought Amy or Emily was attractive, but especially not Amy. But when I saw them live (and we were very close to the stage, so I got a good view), I thought she was totally ADORABLE!

You caught me Heidi. That picture is actually from 1990. I always lie about my age.

I think you're fibbing again, Dave.

Well, I'd never seen her in person, and I didn't realize she was so tall and thin. (Of course, she may have just looked tall b/c she was on stage.) But it was more like just her personality, the ease with which she performed. And yeah, the voice crack was cute. She blushed!

Y'all are so funny. I'm so old I saw The Everly Brothers in Honolulu when I was 13. I think I'm your great grandmother. :-)