Independent Question of the Day discussion

43 views
The Irrationality of Logic

I was inspired by your post in the announcement thread, Michael, to post a new thread. Here goes:

Can logic be irrational? When/why/how?

Brilliant question. Reminded me a bit of a 300-pound Victorian journalist...

It is idle to talk always of the alternative of reason and faith. Reason is itself a matter of faith. It is an act of faith to assert that our thoughts have any relation to reality at all.

The general fact is simple. Poetry is sane because it floats easily in an infinite sea; reason seeks to cross the infinite sea and so make it finite. The result is mental exhaustion ... To accept everything is an exercise, to understand everything a strain ... The poet only asks to get his head into the heavens. It is the logician who seeks to get the heavens into his head. And it is his head that splits.

(You all should, by the way, read the second chapter of Chesterton's Orthodoxy (his prose is positively hilarious and brilliant all at the same time) in which he gives a much better answer to this question than I can.)

Maybe it's irrational to use logic when it comes to emotions?

Ack! Someone please post something!! I can't wait for the inevitably brilliant ideas this thread will conjure!

And I'm too lazy to post a few twaddlings myself!

This could be the drugs (vicodin ftw), but I would like to know how you guys define rationality. If one were to say it were subjective then of course logic could be irrational. Think of I, Robot (the movie, not the book) in which the crazy robot uses logic to come to the decision that all robots must take care of the humans. Now this didn't seem rational to the people, but it did seem so to the robots.

I do not share this view however. I think rationality and logic go hand in hand. Though there is a point at which they can stray. For example, it used to be rational to believe that a heavier object falls faster than a lighter object, and this was of course deduced by logic (it was also refuted using logic). Additionally, it was also logically deduced that the Earth was the centre of the universe which was rational to believe back then, but seems quite foolish now. Now that I have written all this I have to disagree with myself and agree with my original thoughts.... I think that makes sense. Logic can be irrational.

It seems like logic should not play a role in affairs of the heart... But doesn't logic sort of dictate emotions?

I mean, if I were to cut your cat's tail off, would it be logical to be pleased with me (assuming that you want your cat to have a tail)? Not really... logically, you should be angry with me.
Conversely, if it was your birthday, and I made you your favorite cake, you probably wouldn't get angry with me... so without logic, don't emotions become irrational?

Emotions should (must, actually) be logically justified.

the only reason why it isn't logical for you to feel happy if I cut off your tail is because in situations where something is to be taken away from you you'd be mad at me. That is just how humans react because we are inherently selfish, so it has more to do with inherent human nature that has little to do with our logic, but just how our emotions function? don't know if that makes sense. you gotta wait till I really think about what I'm saying. ha.

but in the meantime:
You see a cake your mom just baked, and it looks pretty freakin' delicious, so you have a desire (emotion) to eat it, but your mom says, "Nope, can't touch it till after dinner." It is logically correct for you to listen to your mother since she has the right to boss you around, but you still want the cake don't you? So logic doesn't really have any justification over the desire you have for the cake, it prevents you from following through with your desire and eating the cake.

Kleptomaniacs (people who have the compulsive need to shoplift for anyone who doesn't know) steal despite the fact that they know stealing is illegal, so logic doesn't have anything to do with the rush they get from stealing stuff.

(you trying to start something Mykey?) haha

Perhaps they think that by NOT stealing they are letting the terrorists win. This would seem pretty logical to me.
logic = reasoning
rationality = practicality/acceptance in society
cake = lie

haha. wow.
are you making fun of me btw?

What if I cut your cat's tail off then gave it to you as a present? Your anger would not be selfish, since the cat's tail is now yours - a gift... then why would you be mad (you would be pretty pissed, wouldn't you?)? You would, most likely, be mad on behalf of your cat... You still love the cat, regardless of whether or not he has a tail - so my actions do nothing to keep you from having the same relationship you used to have with your cat, but you're still mad. Because it is logical... not because it is selfish. Am I making sense?

Kleptomania, like many mental disorders, is classified as "irrational"... So, I mean... you know... Logic has no say over whether or not they shoplift, deeming their actions irrational (thanks to chemical imbalances, bad childhoods, etc.).

ok you got me on klepto's, but I would be still selfish because I would rather have a cat that has a tail, what kind of cat has a nub on its butt? and like you said I would be angry on behalf of my cat because I love my cat (emotion)and you just hurt him.

I have a cat. Except not.

wow micheal, haha, is the lack of discussion on the board making your brain melt?

I don't have a cat by the way, nor do I like them. I'd rather have a dog. The black cat from next door came up from behind and freaked me out today, it was great.

Oh, no. Plenty of discussion. I just think cats are funny. :-)

BWAHH! hahaha that's too good. we were taking this cat thing a little far, I like how our discussions can become so much more tangential on this board. mykey are you going to respond to my comment or are you avoiding it? 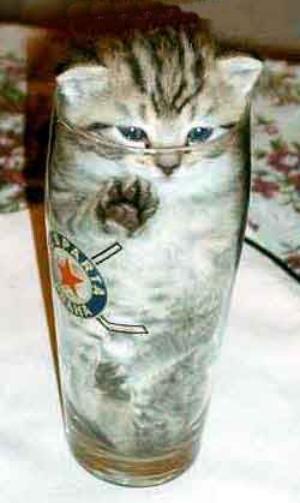 Yalan:
Is your selfishness truly selfish? You are, after all, mad on behalf of your cat because you love him... so it's love. Selfless love. You are mad for your cat since he can't express his anger. You are angry at the injustice. You are angry that your cat will never live a normal life - not that you will live for ever with a butt-nubbed cat (haha). I think that's how I would feel. To be honest, I don't think whether or not a cat had a tail would affect my love for said cat...

So with that said, I basically just rationalized a hypothetical emotion with logic (unless, of course, you disagree with me - in which case my analysis is irrational).

I used to have a cat, but I put it in this box with a subatomic particle and something to measure the decay which was hooked to a poison which would be released once some decay was measured... I never opened the box to see how he was doing...
I miss Schrodinger

90% of your posts contain some reference to quantum physics that goes way over my head. haha.

I did... and I still don't understand. Either the atom decays or it doesn't... So the cat is either entirely dead or entirely alive. Right? (I know that I am probably missing something...).

Well the experiment has to do with refuting the Copenhagen interpretation of quantum physics (located farther down in the article). The "thought experiment serves to illustrate the bizarreness of quantum mechanics and the mathematics necessary to describe quantum states."
In other words, he was attempting to point out that the Copenhagen interpretation wasn't the best way to go. It seems to me that he was trying to point out how ridiculous it sounds when applied in this thought experiment instead of simple theorising about subatomic particles. Perhaps he was saying that it is too simple to think of the cat as both dead and alive until observed to be one or the other as well as questioning when the observation takes place. Is the state defining observation when "when a particle from the nucleus hits the detector"? or when a person opens the box?

It's quite thought provoking.

HAHAHAHAHAHAAAAA!!! I love how a discussion about logic ended up about a discuddion about cats! but i'm joining in :) btw: I LOVE the pictures of the cats...they make me laugh!

Oh man! One time my friend drew a hilarious picture of the Cat+Toast paradox... I wish I could find it so I could post it here. The cat had toast strapped to its feet like roller-skates. It was incredible.

Independent Question of the Day