I've been thinking about how we could improve the way we pick books. The most obvious choice would be to let Veronica decide everything, but she seems to've given in to the demands of pixel-stained techno-peasants for "democracy," so I guess we're stuck with trying to improve the voting system.

The idea I've hit upon is using Goodread's Listopia feature. I've created two lists, one for science fiction and another for fantasy suggestions. Just go and add the books you'd like the club to do in the future.

I see several possible advantages to this:

1) Less work for Tom and Veronica. Instead of creating a nomination thread each month and then culling it to create a poll, there's a single master list of what everyone wants to read. They can just go in each month and find the most popular book that we haven't read yet.

2) In past polls, there've been books that came in a close second but were forgotten about by the time we chose the next book, not to mention perennial favorites like Old Man's War that are always nominated but never win. An ongoing list would give them a better chance at being the next pick even if they don't make it this time.

3) You can vote multiple times on a list. If someone adds a book that sounds interesting but it's not your first choice, you can still give it your support.

What do you think, sirs?

Mod
I like! Let us hope Autarch Veronica allows it...

Great idea. I see that we can "vote" on the list. I am going to assume (without the usual penalties for assuming, I hope) that the voting on Listopia does not translate into the book pick for July?

Just realize that anyone can vote on the lists and add books to the lists, not just group members.

This is a really great idea. I hope Tom and Veronica get on board.

thumbs up! Just curious though. Can you permanently remove a book once we've read it?

Nick wrote: "thumbs up! Just curious though. Can you permanently remove a book once we've read it?"

Any librarian can delete books from the list. Any goodreads member can add or re-add books to the list.

You can also change your vote at any time which means if people don't like the next book at the top they can change their votes so it's not much different to running monthly polls.

Mod
Hopefully T&V could find a willing goodreads librarian who could be in charge of removing the ones that get chosen each month.

I like that older suggestions will finally claw their way to the top or drown under new or more popular suggestions in some kind of darwinian struggle for bookclub glory.

And the Autarch can exercise dictatorial power whenever desired, of course.

Deborah wrote: "Just realize that anyone can vote on the lists and add books to the lists, not just group members."

Well, that is a bit of an issue, but hopefully non-members wouldn't be too interested in messing with the lists (though I guess S&L could attract trolls at some point).

Duplicates, wrong genre and books we've already read will have to be deleted too. I don't mind cleaning up the lists, but I don't want to be the one deciding on each title. So, just make a comment on each thread of which books need to be deleted and I'll take care of it. I'll get an email whenever a comment is added.

How do you get this mythical status?

Micah wrote: "How do you get this mythical status?"
Apply for it.
http://www.goodreads.com/help/librari...

Sean wrote: "What do you think, sirs?"

I like the concept though I admit that I don't like the taste of books of a lot of people in this group. ;) (I say that based on the results of votes in past times...only once has the book I voted for won).

I think it has potential to also be confusing...I'd rather use a master list like that for suggestions and then still put it to a vote, not go based on the "most popular" at the time. Actually, I prefer we not vote and that V&T just decide. But I'd rather it not default to the top of each list each month.

That said, I think the concept is good, and it's definitely a good help for keeping track of what people recommend. :)

I've already applied, so if/when I get it I can help out as well.

I think there is still a need to discuss the books, rather than simply name and vote for them, for example, one book was a strong contender for this month until it was realised that it wasn't released until well after July in several places.

But otherwise, nice work, and a good idea. :)

Nick wrote: "Micah wrote: "How do you get this mythical status?"
Apply for it.
http://www.goodreads.com/help/librari..."

I was more hoping for the whole "Zeus" comes down from on high and anoints you in front of all others sort of thing.

Thanks for the link.

Micah wrote: "Nick wrote: "Micah wrote: "How do you get this mythical status?"
Apply for it.
http://www.goodreads.com/help/librari..."

I was more hoping for the whole "Zeus" comes down from on h..."

No, but people do tend to happily announce it on twitter when they're approved. It's actually very easy, the only requirements are to have at least 50 books shelved and to read the librarian manual. Most people are approved. I recommend it. That way you can just go ahead and change any errors you find, instead of complaining about them.

Mod
Let's be clear. This is not a democracy. Veronica may choose at any time to allow you the *illusion* of Democracy and choice but think about it. Would she ever allow any vote to go against her wishes? I think not.

As the Hand of the Autarch I must support the Mad Queen in all her whims.

However, she is amused by this 'listopia' and will allow it. On a few conditions.

One, we can still have discussion threads about the book picks each month and still put a few books to a vote if we so choose.

Two, there is no two.

So there you have it. We've never voted *every* month, and I er... we... see this as another good resource to get good suggestions for picks to consider.

May the odds be ever in your favor.

Tom wrote: "Let's be clear. This is not a democracy. Veronica may choose at any time to allow you the *illusion* of Democracy and choice but think about it. Would she ever allow any vote to go against her wis..."

LMAO! Nice to know how the balance of power flows!

I think at the very least, the listopia gives us a way to track books we would like to get to, if not then a great way to see what the group is interested in as a whole, even if we don't really get a say in it :-)

Tom wrote: "Let's be clear. This is not a democracy. Veronica may choose at any time to allow you the *illusion* of Democracy and choice but think about it. Would she ever allow any vote to go against her wishes? I think not."

Mwah ha ha! Love it! Best way to control folk is to let them think they have control. :P lol

Darren, perhaps Tom is actually a zombie resurrected to do Veronica's bidding? :P

Darren wrote: "Did Tom stop being a person or something?"

Our Lady Veronica allowed Tom to pick a book once. He chose Memoirs Found in a Bathtub. Odds are we'll read Tarnsman of Gor before she allows him to pick again.

It is nice to see order restored in the kingdom again. Tom is an excellent PM.

Actually the more I think in it, the more I love these lists as recommendations from the hive mind, whether or not they get used as S&L picks. I've had plenty of times where I don't have anything in my queue that rings my bell and this provides a resource for when that happens.

I like this idea, the suggest a book threads are getting long and exhausting.

Nobody puts Old Man's War in a corner! 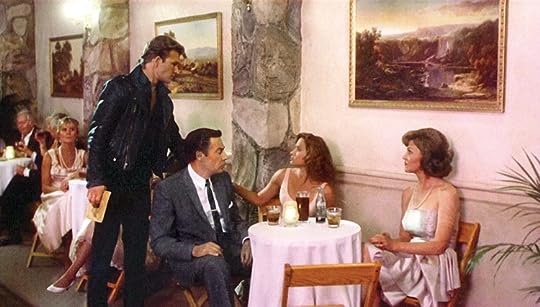 Ok well, the gods of Goodreads have blessed me with the power of the Librarian, so I too can make changes to the list now! (as long as we discuss them first and this is needed)

So to quote from the book of Cartman "I Have Athoritha"

Tom wrote: "Let's be clear. This is not a democracy. Veronica may choose at any time to allow you the *illusion* of Democracy and choice but think about it. Would she ever allow any vote to go against her wis..."

What is this, 'Fifty Shades of Pink'?

Btw, you can make little comments on books you vote for, and they become visible when you click on the number of voters.

Too bad we can't pin this discussion on the forums so the list links are easy to get to.

Put it in the FAQ.

No, wait, we want people to see it.

Mod
I'm very excited to announce Tarnsman of Gor as our July pick.

Hello, Tom will be right back, meanwhile please enjoy making suggestions in the listopia list as it will help all of us in making better selections for you.

by Philip Jose Farmer would be superior to Tarnsman of Gor.

by Philip Jose Farmer would be superior to Tarnsman of Gor."
How about
The Feminists

Sounds good to me:

Picture, if you will, a combination of ILSA: SHE WOLF OF THE SS, ESCAPE FROM NEW YORK, IN LIKE FLINT, and INGLORIOUS BASTERDS and you'll pretty much have a perfect picture of THE FEMINISTS

I'm embarrassed to admit how long it took me to realize you guys were joking.

I haven't watched the episode yet. Or last week's bonus. Hopefully today.

Because who didn't read Xanth and think, "This guy should write pornographic fantasy."

The idea of a collective list sounds interesting but I would be very hesitant to use that as the deciding factor when it comes to monthly picks. I think democracies are great in theory but they fall apart when its members do not share the same level of enlightenment or responsibility. Or in this case, the ability to identify good literature that satiates the masses while yielding ripe discussions.

Being a librarian makes me want to change my tag to "Conan."