This topic is about All My Fortunes
183 views
SOLVED: Adult Fiction > SOLVED. Orphan sisters in Russia need to cross mountains [s]

This story begins with a mom and three sisters I think, and the mom and littlest one die. The two remaining sisters are left alone. One ends up marrying some kind of Cossack general who is much older. The other ends up with a pack of homeless kids, the leader of which calls himself "kevi the wolf." There's a boy named Pavel... and they're supposed to get across the mountains but the journey is treacherous and they have to wait for spring, or something... The title might have something to do with a river or water...

Thanks for you help!

Mod
Danielleshanti, are you still looking for this? Was it YA, children, or adult? Any idea when it was published?

I do remember two scenes specifically. One, the little girl plucks a fly off the hand of the Cossack, simply stating that their bites can hurt. 15-20 years later they get married. Second scene, Kevi the Wolf and the younger sister have a pretty explicit moment--they are only about 12 and 14, and I remember it because her breasts have barely developed and are tender, and he says he "has to hurt her" when he touches her. She then called herself Avi the Wolf, I think. So, her name was Avi--or she made it up to match Kevi.

Mod
This description doesn't mention Kevi or Avi or Pavel, but it was one of the books that came up in a search of keywords orphans and Cossacks:

The Night of the Burning: Devorah's Story

"Still sad and frightened after living in Poland through World War I and the Russian Revolution, twelve-year-old Devorah Lehrman, her younger sister, and other Jewish orphans travel with Isaac Ochberg to South Africa and make a new start. Devorah's world is shattered by the tragedies of post-Great War Europe: gas poisoning, famine, typhoid, and influenza. Then comes the Night of the Burning, when Cossacks provoke Christian Poles to attack their Jewish neighbors. In 1920, eleven-year-old Devorah and her little sister, Nechama, are the sole survivors of their community. Salvation arrives in the form of a South African philanthropist named Isaac Ochberg, who invites Devorah and Nechama to join his group of two hundred orphans in their journey to safety in South Africa. Although reluctant to leave her homeland, and afraid to forget her family, Devorah follows her sister, who is determined to go to the new country. There Devorah is dealt the greatest blow - Nechama is adopted and taken away from her. In the end, though, Devorah realizes that she is not solely responsible for keeping the past alive, and that she will not betray her beloved parents when she is adopted herself - and finds happiness again."

Thanks for trying! I think the book I read was probably set before the 1920s. Maybe even mid-19th C?

All My Fortunes?
The names are similar; one of the sister's is called Pavel and the other is Eva (Avi, maybe)

Description from Kirkus:
The competent but never dazzling story of David, an engineer from Wales, and Pavel, a farm girl from the Caucasus, who meet in 1930's Russia. David is haunted by a childhood event--the sinking of a ship his dad built that caused the loss of the family estate, fortune, and his dad's life. But Pavel has almost forgotten the even more horrible traumas in her past: after the Red Army massacred her family, she and her sister, Eva, were rescued by a soldier and taken to live with their foster parents, wealthy farm-owners. David becomes an engineer, gets a job in Leningrad, and falls in love with Pavel. But David is called back to Wales because his mother's dying, then can't get back into Russia; when he writes Pavel advising her to meet him in Turkey, the letter is censored, and soon she's accused of treason and her stepparents are carted off to a timber camp. Pavel makes her way to Moscow, just missing David, who has sneaked into Moscow. David returns to Wales, marries, and has a son. Pavel marries an Army officer, Rudi, who was her rescuer in the past but who conceals his involvement in her family's massacre. (view spoiler)[There's a dramatic climax when Rudi captures Pavel's sister, Eva, who's been implicated in serious crimes, and both fall to their death, freeing Pavel to seek out David in Wales; and his wife has recently committed suicide, making possible a happy ending. (hide spoiler)] By turns melodramatic and frumpy, but with interesting glimpses of pre-WW II Russia. (Kirkus Reviews, August 15, 1988)

Hmmm...I don't remember anything about David and that storyline, but I suppose this could be it! 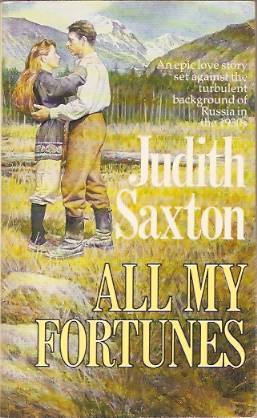 There are too many similarities for this not to be it! Thanks, Tab! Not sure how to move this to the Solved section.