I'm still in Part II but will try to catch up this week.

Mod
Read as slow as you like. That's one great thing about group readings :) don't need to rush because there's a flexible time schedule.

Shanez wrote: "Really, so it's all his fault? I thought it's more a social document addressing the evils of the time. As I said earlier a symbolic work. I think I talked about this earlier the dream about the kil..."

Shanez, I know you were asking about this earlier, perhaps it did contributed to his crime, but I'd still go with "the superman complex" because there's more evidence here for that read Raskolnikov's article. But poverty is a central issue, you are right, almost every character so far except Luzhin is poor.

Mod
ONLY if you comment on something beyond these chapters, please warn others with ***spoilers included**** or use the formatting tips in Goodreads, (some html is ok)


Few things to get things going...

"The old woman was a mistake perhaps, but . . . it wasn’t a human being I killed, it was a principle!"

We saw the crime but I still don't see any punishment...the punishment he experiences is own interior conflict, perhaps D. trying to say that anxiety and the guilty consciousness is THE punishment for a criminal than a capital punishment?

Any thoughts on Raskolnikov’s article “On Crime” with the rationale for committing the murder?

Raskolnikov article's connection to to nihilism?

Is his try of justifying his actions working? Does Raskolnikov’s nightmare reflects his guilt? 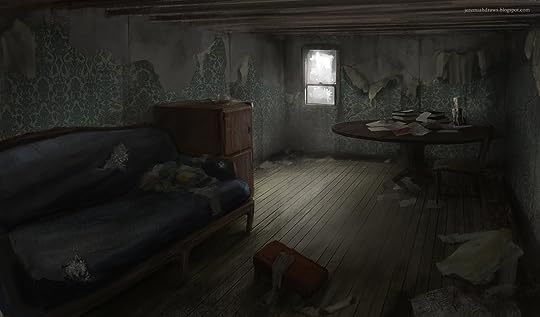 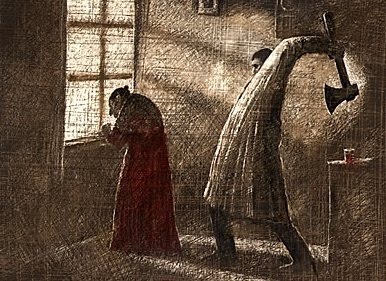 Amalie wrote: "Shanez, I know you were asking about this earlier, perhaps it did contributed to his crime, but I'd still go with "the superman complex" because there's more evidence here for that read Raskolnikov's article. But poverty is a centra..."

Perhaps it's only reason but I still go with the poverty theory. Raskolnikov is troubled by the human suffering that he encounters in his daily life. He doesn't believe the old woman (a moneylender and pawnbroker) deserves it and it the money was distributed among the poor, their lives could be improved, if it's left with the woman no good will come.

Then about the article, it's only an attempt to rationalize his crime but deep inside he knows that what he did was wrong and his theory is all folly. We see through the dreams he is being tortured about what he did.

As for the article/essay. Yes, I read it again. I didn't remember he was trying to justify his actions by connecting himself mentally with Napoleon Bonaparte, believing that murder is permissible in pursuit of a higher purpose. I thought it was an argument among the readers.

But here's what Wikipedia says:

Napoleon complex is an informal term describing an alleged type of inferiority complex which is said to affect some people, especially men, who are short in stature. The term is also used more generally to describe people who are driven by a perceived handicap to overcompensate in other aspects of their lives.

I don't know if it fits with Raskolnikov, if it does then his inferiority is being poor, right?

Mod
I'm still not done with my reading but I think it's a combination of all. There are different criticisms. Different critics have different views, according to my introduction. Dimitri Pisarev dismisses as there are number of faults in the novel (1) Raskolnikov's continued wrangling with himself over the motivation of his crime; (2) Raskolnikov's feelings of guilt; (3) the fact that both Raskolnikov and Marmeladov may be said to have chosen their lives of poverty and wretchedness; that, in fact, Marmeladov positively enjoys his humiliation. He argues that Raskolnikov, far from being a grotesque and unfair parody of the youthful materialists and utilitarians of the time.

Then Strakhov questions the motive of his crime. He has narrowed it down to (1) Raskolnikov's intellectual pride; (2) Raskolnikov's Napoleon complex--that is, his idea of the role of the great man in history; and (3) Raskolnikov's poverty (murder for gain). So you see it's may be a combination of all. I'll give my final thought at the end.

I have always thought R's motivation was multi-layered, and in the end, not one factor can absolve him of his guilt. Which for me makes him an interesting character--far more interesting than if he had no guilt and was a psychopath (yawn). It's the obsession and the guilt that make C&P such a compelling character exploration.

Shanez wrote: "As for the article/essay. Yes, I read it again. I didn't remember he was trying to justify his actions by connecting himself mentally with Napoleon Bonaparte, believing that murder is permissible i..."

I think R's sense of entitlement is also at work here, just as it is today.

"Twenty-something student whose extreme poverty has recently caused him to drop out of the university; the stress, he has ceased working or attending to practical matters. He often remaining alone in his box-like room for days at a time ( that picture in message 4 is perfect!). During these periods of isolation that he devises a theory that divides humankind into two categories: those ordinary and those extraordinary. Extraordinary individuals, he believes, have an inner right to transgress the law in order to make their great ideas and/or discoveries known to humanity. Believing himself to be an extraordinary individual, he decides to test his theory by deliberately murdering an old woman pawnbroker. afterwards however, he is immediately tormented by guilt and the constant fear of being found out. So I always felt it poverty and intellectual pride motivated crime.

Yes, it's great that he wasn't someone like Humbert.

Dostoevsky seems to have learned some of this idea from Pisarev, who elevates the character Basarov, from Turgenev's novel , Fathers and Sons "to the level of a Nietzschean superman, standing beyond good and evil" (Frank xiv). Dostoevsky's own fear of unoriginality and fear of failure is seen in Raskolnikov...

In the conversation about the article, Dostoevsky is making a social commentary through Razumikhin's arguments about socialism and crime. His names meaning is something like "rationality". And he can think.

Socialism, assume that once their system is adopted, crime will disappear. But the problem with this as he argues, is that socialism does not take the history into account. It will "at once organize the whole of mankind and instantly make it righteous and sinless, sooner than any living process, without any historical and living way!" In other words, it is all theories, but not very practicable.

Shanez wrote: "I read this online just now. It says that in the theory of the extraordinary man, Dostoevsky was not completely original.

Dostoevsky seems to have learned some of this idea from Pis..."

But didn't Crime and Punishment come before Nietzsche's Zarathustra?

Dostoevsky seems to have learned some of..."

I have no idea, I just quoted the page :) but I just typed you question and googled it and yes, it seems so. Oh, dear!

Kathleen here's a good article about Nietzsche if you're interested: http://www.anus.com/zine/db/friedrich...

Fathers and Sons (other topics)