Copying from Scalzi's Google+ post below:
John Scalzi - Feb 20, 2012 - Public
A nice thing happened today: I'm nominated for two Audie Awards (them's for audiobooks!), one for Fuzzy Nation, and one for Agent to the Stars. Nominated along with me: +Wil Wheaton , who narrated both. Whee!

And going through Scalzi's article, here is the list of the Audies finalists.
http://audiobooker.booklistonline.com...

The Tears of the Sun: A Novel of the Change, by S.M. Stirling, Narrated by Todd McLaren, Tantor Audio

I didn't know there was a awards ceremony for audible books. Guess I'm the only one that is excited to learn this. This list will help me with my next audible book choice.

I love Scalzi and Wheaton so this makes me very happy! I just picked up my Audible book for this month (the S&L pick) but I might have to try the Solaris one next... I've been hearing good things about it.

I loved Fuzzy Nation! I hope the win :-)

I do not understand the nerdgasms over Wil Wheaton. Yes, he seems like a cool dude. But no one can be as cool as the nerds seem to make him.

Don't get me started on some others...

But I actually preferred Wheaton's narration of Ready Player One to his work on Fuzzy Nation. But I preferred Fuzzy Nation's reading to the original Little Fuzzy reading. So, not a bad nomination.

terpkristin wrote: "I do not understand the nerdgasms over Wil Wheaton."

So this doesn't do it for you? 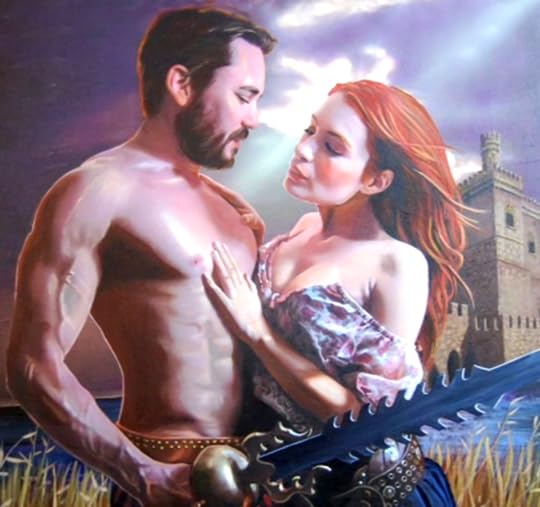 The wrong person is wearing a shirt in that picture IMHO. :-)

Nick wrote: "The wrong person is wearing a shirt in that picture IMHO. :-)"
She barely is!

Jenny wrote: "Nick wrote: "The wrong person is wearing a shirt in that picture IMHO. :-)"
She barely is!"

This picture reminds me of a rule a friend of mine has. She says she won't date a guy who has bigger breasts than she does. This picture isn't that bad but some romance novel covers are pretty gross.

Actually I have no idea who the woman is supposed to be.

I guess in this aspect of nerd culture, I will never fit in. Now is probably the time to say that I hated Star Wars.

It is a joke image from The Guild, a web based geeky gamer show, that's Felicia Day.

terpkristin wrote: "Now is probably the time to say that I hated Star Wars."

You'll have to be more specific. Original trilogy or new trilogy? .. hehe

Nick wrote: "terpkristin wrote: "Now is probably the time to say that I hated Star Wars."

You'll have to be more specific. Original trilogy or new trilogy? .. hehe"

Never saw new trilogy. And in fairness only watched original trilogy as a part of a class on new mythology.

You'll have to be more specific. Original trilogy or new trilogy? .. hehe"


I was just joking. I was not a fan of the new trilogy and I have the memories of watching the original trilogy as a kid keeping me from seeing the movies with anything coming close to a critical eye.

I like the original trilogy, but I refuse to give Lucas another dime until he puts out decent versions of the original, unaltered films.

As for the new trilogy, I saw the first one in theater, watched the second on DVD and skipped every scene with Anakin and Amidala. I didn't even bother with the last one.

This topic went to Star Wars in record time.