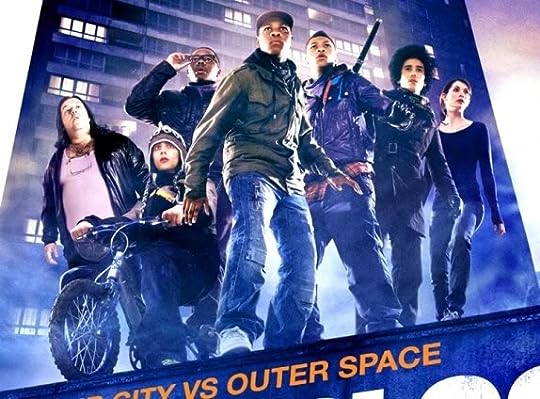 Mod
Okay I got a free screening to go see this movie but I didn't get to make it. So when i saw it available on my local RedBox i thought I'd give it a go. And boy I am glad i did! Although this movie previews could have been better the movie was so good! Attack the Block is about Five teenage boy's or should i say gangsters who live in the poor parts of England. The teenage boys go around town robbing people until they rob this young lady fresh out of nursing school nurse and everything goes wrong. While in the process of robbing this young lady something falls out the sky and attacks one of the young guys and they kill it. I say it because no one knows what "it" is. But after killing this creature the boys find out their are more coming and the creatures are after them... I dont want to give away the whole story but this movie is an indie film with fresh & brilliant characters. This movie has lots of action,suspense,sci-fi material,and funny parts to keep you interested the whole hour and forty five minutes. The actors were great,and although i've seen quit a few movies like this one it surprised me with all the action and the great acting that it did have. So i do recommend this movie to people who like a little bit of action,thriller and comedy all rolled in one! I give it Five stars!!! loved it! This movie was also in the Austin Film Festival which is awesome i think! A must watch!!

This movie was AWESOME!!!!!! Five stars this was actually a good indie film it had action, humor, and some great actors. I recommend this movie for every one its a fun movie and anyone would enjoy it :)