note: This topic has been closed to new comments.
15 views
Topics Streak Made > Side characters

newest »
message 1: by [deleted user] (new)
Nov 07, 2011 08:20AM
Have any cat character that will be in the prophecy? A kittypet who helps them through twoleg terrory? A loner? Make them here. I will approve them. 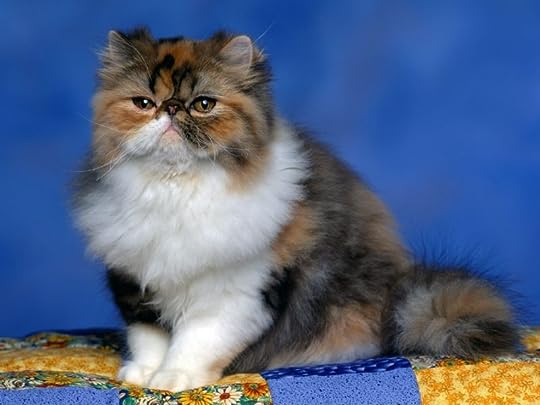 Rank: Loner
Personality: An ambitious cat who wants to rule the forest, by gainiing trust and being sneaky.
Other: He looks very sly.

Personality: Rani is an adventurous, rambunctious kitten. She loves to explore, run, play, have fun, and meet new cats. She is super friendly and cheerful all the time. She is also VERY hyper. But she does have a warrior side to her. She has a sharp tongue that could easily hurt someone through words and very sharp claws and teeth for a kitten her age. Though, since almost everyone she meets, she becomes friends with, so she almost never has to fight. She will pester you until you agree to be her friend and she never stops smiling. She is a great listener and has great ideas. But watch out- she is super mischievous and tricky, and loves jokes.

History: Rani was born with five littermates, Nila, Kiko, Hallie, Lightning, and Marson. Their mother was named Lily and her father was Birchflash, a warrior from the Clans. Rani and her littermates never saw their father much, but they did live as loners at first with their mother. But one day, a fox attacked their mother, killing her. Then it tried to kill Rani and her littermates. But Birchflash appeared and protected them, fighting the fox off. But he also died. After the fox was gone, Rani did everything she could to keep her family together. She took them to twolegplace and got a home with a twoleg. It was hard living indoors at first, but the six of them were soon accustomed to kittypet life. They played in the garden often and seemed to forget about their parents, but of course they didn't. But they were happy again.
But one day, a mysterious cat named Sol found them in their garden. Rani, being the friendly kitten she is, immediately befriended him. He told her stories of the Clans where her father had lived. And she listened to him intently. But her littermates didn't like Sol. They were too suspicious of him. So one day, they told Rani to stop seeing Sol. She was confused, but also loyal, so she did stop. They never saw Sol again, for a while, at least.
After a day of hunting for sport, Rani came home to her twoleg nest to find Sol with her littermates. At first she didn't understand what was going on, but then she realized Nila, her sister, was being attacked by the older cat. Rani ran towards Sol but he threw her off and she lay dazed on the ground. Another cat, one she didn't know, appeared and held her down. Sol slowly and painfully killed her littermates while Rani was forced to watch. Then he and his cat left Rani to the bloody bodies and were never seen again. Rani still hears her littermates' screams and yowls for help, yet she tries to block them out. She blames herself for their deaths, because she was the only one of them that had learned to fight from her father when she'd seen him.
Moons later, she found Melanor, an elderly shecat, and became very close to the old cat. Now she is very protective of her and takes care of her, for she was like a very old mother to Rani. Rani hunts for her and will not let anyone harm a hair on her pelt.
Some days, Rani looks for Sol, eager to get revenge for what he did to her littermates. But she has never found him. For now, she just blocks the memory out.

Other: Helps the prophesy cats during their journey through twolegplace. She knows the twolegplace by heart and could navigate through it with her eyes closed. She goes exploring through it and a bit future away from it each day. She knows where all the nice cats, the mean cats, the nice twolegs, the mean twolegs, the dogs, the rats and everything else are. She is cute and funny and great to be around.

Name: Melanor
Age: 79 moons
Gender: Female
Looks: An old, gray she cat with white muzzle from age. Her fur is unkempt and matted, sticking up in places. Her eyes are an ugly amber yellow.
Rank: Loner
Personality: A wise, elderly she cat who gives advice to anyone. She is well known around Twolegplace, and is respected. She has a sharp tongue, and can be aggressive, but understands problems. Although elderly, she is quite active and not frail.
Other: The cats come across her on their prophecy. She can immediately sense their quest, and tells them to stay clear of the Rushing River ahead. She exchanges her advice for a piece of prey, for she is a weak hunter at her old age.

Thankies Streak!! Can we rp in twolegplace?

I think what Ny and Leap are doing would really mess up the plot. I don't think I want it to go all crazy like that...

Uh.. I dunno, they can help. But I don't want too many cats helping..

Name:Snowy
Age: 6 Moons
Gender: she cat
Rank:Rouge/loner
Appearance:
http://www.google.com/imgres?q=white+...
Personality: Nice, short-tempered, impatient, fierce, bubbly, outgoing, loyal, cute, strong, fast, daring, brave, loves to swim, would do anything for someone she loved, stubborn, undrstanding, clever, smart, fierce.
Kin:open
Crush:None
Other: Helps the Clan cats and guides them, since she is an expert around the area they're travelling. She knows some cats too. =]

I was asking about her being relatd to storm anyhow, and I will add her personality. Sorry.

I don't know yet. Any I guess.

Name: Missy
Age: 20 moons
Gender: F
Looks: [image error]
Rank: Kittypet
Personality: Missy is a kittypet so she lives a comfortable life but she loves being outside she helps passing cats or lost kittens and cats. She is a nice helpful cat and she cant help but be curious sometimes.
Other: Missy is curious but she is also very nosy :P When Missy meets the cats that pass by sge is really curious but they are lost so she holds off but takes the long way to where they need to go so she can ask all of her questions maybe they finally ask her if they are going to where they need to and they get mad at her because she takes them the long way and then she feels bad and makes it up to them by showing them a big supply of herbs they can use or something like that.

Yours is approved WBrillant, but they only need food and water and stuff, she won't be leading them to where they need to go. The chosen cats will do it them selves and the biggest group is in the clearing.

Krissy about the clan cat thing.. These cats will just melt away after the prophecy. Or I might make a kitty pet rp topic. So, clan cats have to be made in the characters folder.

Thanx Streak will do!