The mistakes and conflicts of the early twenty-first century peak in a clash of ideology and mechanized steel that spans across the planets of the inner sphere of Sol.
A contention of worlds ensues as the Earth Federal Republic and Solar Empire battle for solar supremacy.
On one side, caught within the currents of war, is a band of young spacemarines, the Sledgehammers, who quickly find themselves embroiled in a plot that transcends the politics of the struggle around them. A dark and ancient secret looms throughout Sol in a myriad of alien artifacts that are the intense focus of one man's mad ambition.
On the other side, a revolutionary puts his own plan into motion as the would-be liberator of his people. Taking advantage of the conflagration, Alphonse Zhukov and his conspirators risk everything to free their proletarian brethren from the iron grip of the Solar Empire.
Both sides quickly find themselves immersed in a storm of lies, betrayal, love, and romance as plans within plans and schemes within schemes forge their individual goals into a common cause.
At the eye of the tempest is an alien warship that holds the key to finding the Goddess Device and unraveling the The Stygian Conspiracy that surrounds it.

Product overview:
The Stygian Conspiracy is a unique science fiction novel that takes place during a military conflict set in the 2070s. Political intrigue and scheming abound as the major planetary nations battle for control of the solar system. The story follows the exploits of two opposing groups both fighting against the same enemy for their own reasons. Ultimately, they find themselves working towards a common goal to save mankind from the insane ambition of one man. The Stygian Conspiracy is an ideal novel for those who enjoy military science fiction, action/adventure SF, and space opera.
Word count: 361,119.

That is an excellent product description--well done!

Thank you Joe.
For anyone interested, there is also a website dedicated to the Nexus Arcana universe.

Please also check out our compendium which contains full color images of weapons, vehicles, and warships of The Stygian Conspiracy.

Sounds like you've got some great coverage for the series. That's fantastic.

Sorry for the late reply.
I have had oodles of work as I start the 2nd book in the trilogy, "The Grand Duke's Ambition."

I was recently interviewed on Laurie's Thoughts & Reviews.

Here is the link:
http://lauries-interviews.blogspot.co...

The 4th Edition of the Stygian Conspiracy has now been published on Amazon.

It has an entirely new prologue to bring the story inline with the 2nd novel (that is currently at the editor's desk).

Here is a link to my Deviantart gallery that illustrates some of the ships, machines, and weapons of the world of Nexus Arcana. 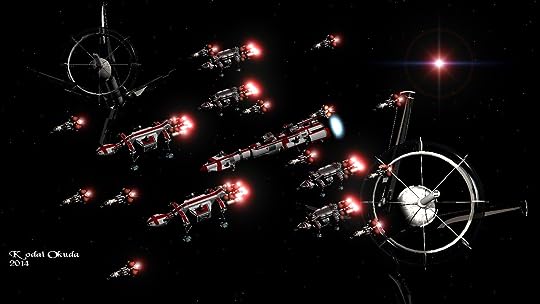 The Stygian Conspiracy (other topics)