Penny for Your Thoughts discussion

27 views
What Ifs > What if a werewolf bit a goldfish?

So Neil Gaiman visited my area and gave a talk. Someone asked about how he dealt with writer's block, and he said that it's just an excuse. But that's not the point; the point is that he went on a bit of a tangent and talked about how daydreaming is okay and how it's okay to question things, including the relationship between two raindrops and whether or not they liked each other. And the other example he gave was about werewolves.

We all know that when there's a full moon, a werewolf turns into a wolf from a human. Yes, but we only know that werewolves bite humans, so like, what would happen if it bit a goldfish. Does it grow hair all over its scales? Or does it start eating other fish? Or does it go and kill Babmi's mom (two people got that)?

Last time I checked, werewolves don't have any effect on the creatures they bite except for humans. So I don't believe that a goldfish could acquire lycanthrope, at least in that way. Another small problem: how would the werewolf only 'bite' the fish without ripping it in two or causing it to bleed to death?

But if somehow a goldfish did get infected, I'd assume it would become carnivorous.

Mod
Ooh, interesting. I suppose it'd be savage and maybe a cross between a dog and a shark, except really tiny. And maybe still cute. :D

Unless it munched off your fingertip when you tried to pet it.

Sooo... it'd pretty much turn into a piranha. Then again, I've had cannibalistic goldfish before. Provided the goldfish survived the bite, I don't think it'd make much of a difference.

I'd doubt the goldfish would survive the bite. Heck, I think the werewolf would most likely swallow it whole...

The werewolf might not stop at a bite. It may eat the fish. If the fish gets spared, then maybe some kinda mutation would take place. Or maybe the werewolf myths don't apply on fishes..

If the werewolf eats the fish, it transforms in its stomach, bursting...

Actually, let's just stick with what you said.

Yeah... I don't need bursting to burst my appetite.

Helen wrote: "If the werewolf eats the fish, it transforms in its stomach, bursting...

Actually, let's just stick with what you said."

Ah, but if the werewolf simply swallows it whole, perhaps nicking it slightly with his teeth in the process... New thought: the fish (if it survived the trip down) would be taking in a mixture of saliva and stomach contents in an attempt to extract oxygen. What does ingesting werewolf saliva do to one?

I'm sure there are tons of characters from Paranormal Romance books that would be able to answer that xD.

I'm dying laughing over here, just so you know.

It was too good to pass up.

Mod
I think the question was actually focusing on what would happen to the fish after it was a werewolf. XD But I like these answers better.

Mod
Helen wrote: "Ah, but if the werewolf simply swallows it whole, perhaps nicking it slightly with his teeth in the process... New thought: the fish (if it survived the trip down) would be taking in a mixture of s..."

Nothing you can come up with can beat my answer.

Magdalena (Maggie or Magtail) wrote: "I think the question was actually focusing on what would happen to the fish after it was a werewolf. XD But I like these answers better."

...What would happen to a fish after it was 'bitten by' a werewolf.

@Helen
The fish might not be able to stand the gastric juices. Fish can extract oxygen only from really mild acids or bases. The digestive juices would not supply any oxygen.

Mod
Rudyards wrote: "Nothing you can come up with can beat my answer."

In the stomach of a normal wolf (or anything else) death would come very quickly. However, it would still take in some amount of the fluids. Pretending that just ingesting the saliva would infect you (though Rudyard's evidence indicates otherwise xD), would it have time to begin to transform? How far would it get? Would it be a werefish out of water or a wolfish in the belly of a werewolf? Tune in next time...

Why are we going into the bathypelagic zone?

Hmmm - Well saying it'd also be a Frankenstein-ian Mutation as obviously, as Rudyards pointed out it would be ripped to shreds – sushi, in my opinion it would at every full moon attack and savage apart ANY other fish or creature that comes its way.

As an example, take in respect the Parana: how do we suppose it got like it did? It has savage fangs, large muscular-isc body, and to me personally looks as if it has some weird size defect. Say this Parana is the said Goldfish; bitten, though not killed, by a werewolf. This is the form I would envisage it to become.

Maybe I am wrong but just flow with me; maybe this Goldfish would grow ‘larger’ in size at its transformation – just as the human would – to become the larger ‘threat’ or ‘hunter’, ‘monster’ take your pick!

You mean, Piranha? Yea maybe.
But a were-fish would more likely look like an Angler Fish. Look it up, if you don't know.

Hope for The Warrior wrote: "You mean, Piranha? Yea maybe.
But a were-fish would more likely look like an Angler Fish. Look it up, if you don't know."

Hope for The Warrior wrote: "You mean, Piranha? Yea maybe.
But a were-fish would more likely look like an Angler Fish. Look it up, if you don't know." 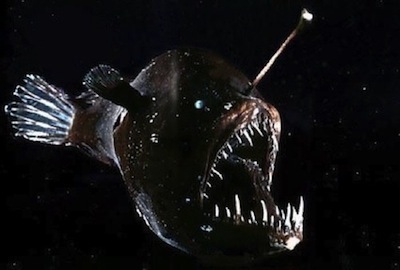 ok so maybe your right about that one...lol

...that's an anglerfish. Not a piranha.

Yeah. Piranhas are MUCH MUCH smaller than Anglerfish. MUCH.

I think I should get into Marine Bio or whatever they call it for a school subject.

Do you know what it's called, Ivi?

Er.. Izzy meant for it to be an Angler fish.

I think you are right about Marine Bio, Fire.

I'm in Marine Bio. It's called just that.

No, I'm taking the class.

Iviana (The Sign Painter) wrote: "...that's an anglerfish. Not a piranha."

i know - i looked up an angler fish as Vish said and posted it up...i know what a piranha looks like

Penny for Your Thoughts