Mod
So I noticed there wasn't a topic about Touch of Power, the first book of Maria's new 'Healer' series yet! So here it is:

Touch of Power
Laying hands upon the injured and dying, Avry of Kazan assumes their wounds and diseases into herself. But rather than being honored for her skills, she is hunted. Healers like Avry are accused of spreading the plague that has decimated the Territories, leaving the survivors in a state of chaos.

Stressed and tired from hiding, Avry is abducted by a band of rogues who, shockingly, value her gift above the golden bounty offered for her capture. Their leader, an enigmatic captor-protector with powers of his own, is unequivocal in his demands: Avry must heal a plague-stricken prince—leader of a campaign against her people. As they traverse the daunting Nine Mountains, beset by mercenaries and magical dangers, Avry must decide who is worth healing and what is worth dying for. Because the price of peace may well be her life...

The expected publication date is December 20th 2011! That's only 5 months and 5 days away!

I for one can't wait! And I'd love to know what the cover is gonna look like!

Mod
Renée wrote: "So I noticed there wasn't a topic about Touch of Power, the first book of Maria's new 'Healer' series yet! So here it is:

Touch of Power
Laying hands upon the injured and dying,..."


I went to her sining on tuesday and she siad that the book wasnt coming out untill january :( But thats still not very far away.

Mod
I posted the description on my blog and someone asked if the book will be set in Ixia and Sitia...does anyone know?

Mod
No it isn't. It's a whole new series. Maria has taken a break from Ixia/Sitia. But she still has a lot of people in Ixia/Sitia whose story she wants to tell!

Mod
Lol. I was looking around this morning and found out the same thing :)

Mod
I bet it will be a good cover though! Worth the wait!

Mod
so excited for this one!

Check out the Touch of Power USA cover!!!

Mod
And here's the UK cover 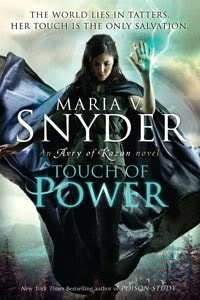 Mod
omg they are awesome!

Mod
UK! The US cover is a little to pink for my taste!

Mod
I think that's maybe why I like it lol. Most of the paranormal/fantasy books out there have dark covers and This cover is a nice change

Mod
It's true you can't read it until you get your hands on a copy, but I think you meant wait! ;)

I made the big mistake to read the first chapter in her newsletter! It makes waiting even harder!

Mod
I resisted the urge to read the first chapter. I didn't want to be tortured for a few months until it's released lol.

Mod
I tried to do the same, it worked for 2 minutes :P

Mod
Just 103 Days until I can read the rest!

The good thing is that I'm sure the time will fly between now and then!

Mod
Well it's not like I have nothing to read till then! (looks at her over full bookcase)

haha, this will be my third count down clock in my room :P

Mod
NOOOOOOOO! The UK version is (according to Amazon) getting out later! januari 6! That's two whole week later!!! NOOOOOO!!!

Mod
Bummer! I've noticed that a lot of books are released later in the UK.

Mod
True!
I'm just glad I switched to reading in english instead of in dutch 2 years ago! Then I'd have to wait even longer!

Mod
The first review! And damn it's a good one! Now I really can't wait! http://www.goodreads.com/review/show/...

Mod
I skimmed for key words but I don't want to really read the review; I want to be completely surprised when I read the book! That being said, the words that jumped out at me while skimming really has me excited!

I quote: "Touch of Power is Poison Study good!!! *HUGE CHEER* I haven't enjoyed a book by Maria V Snyder so much in a long time (even though they are usually great); I stayed up reading til all hours and was even late to work because I couldn't put it down! I really hope you agree with me when you get a chance to read it. I would definitely recommend this as required reading for Maria fans ASAP!!"

Mod
So has anyone preordered yet?? 47 more days!!

Mod
not yet, but I think I will!

Mod
The thing is, Maria said she would post some giveaways as soon as her own stack of books arrived! Which would be before the release date!

Mod
I'm still going to preorder, I get a bunch for other people so if I win I will keep that copy and give mine to a friend :)

Not bad either :D

Mod
*crosses finger too, but doesn't really hope because bookdepository is late with Clockwork Prince too...*

Mod
I've done one Amazon preorder and it showed up two days before the release date! I've never preordered via B.Depository