A Tribute to Harry Potter discussion

Mod
Here's a topic to write ur opinions of why Harry Potter beat all those other franchises and book series' and movies to the floor. Twilight recoils in the light of Harry Potter. It kicks Lord of the Rings in the ass :) Why???

BIGGEST franchise the world has scene is Harry Potter. (thats the movies and books put together).

BIGGEST turn out for any premiere EVER in history was for the London DH part 2 premiere.

HIGHEST amounts of tickets sold in advance (over 32 million - Eclipse was the previous highest with 30 million).

And theres more people! I mean does twilight even have any websites dedicated to it??? HP has like 10!

For me, Harry Potter isn't just a story, it's a world. JKR is smart; she used our world for her story and built an equally believable and organised world within it, hidden from our eyes. It has governments, schools, hospitals, shopping places, sport, history and its own languange in a way. I think that's why it's so easy for me to just fall into the Wizarding World and not even notice.

Many people describe Harry Potter as 'a story about a boy wizard' but it so much more than that. The thing with Harry Potter is that everything links, every single thing is important, part of a much bigger and complicated plot. It will never fail to amaze me how everything has a reason and everything happens for a reason. That is the sheer brilliance of JKR.

Also it hasn't even screened in the U.S.A yet it has already given DH an estimated $42 million in the box office. Sweet.

Mod
EXACTLY!
Every time I read one of them, at the end I have to stop and think, HOW did JKR come up with this world. How did she come up with that minute detail about Bertie Botts Every Flavour beans, or that portrait hung on the wall in St. Mungos. It's amazing.

The first thing I ever learnt about story writing was that it had to paint a picture. I've never read another book that paints a better picture than Harry Potter does. JKR got 1001 things right, and zero things wrong thats for sure.

IT WAS THE BEST RIGHTT?

Saddest
- When Fred dies and you see Lupin and Tonks lying dead on the floor. That was so bloody emotional I was shaking. And ron and george crying really sunk it into me, coz ive never seen either of them like that before. wow.

- When Snape is hugging lilly in the memory. That was such a great addition I thought that bit was amazing!

- When Ginny runs at Voldemort and yells NOOOOO when she sees Harry dead. But 2 secs later I was cracking up at Voldemorts laugh!


Most spine-tingling
- When all the Hogwarts-ians are staring up at the sky and holding hands etc.

- When McGonagall bewitches the armour with Locomotor something, and then Molly, Flitwick and Slughorn are casting PROTEGO MAXIMA etc at the sky. That bit was my favourite because it was so tense and amazing. SO SUSPENSFUL!

- All ron's One Liners! Lol ILY RON. Eg. Ginny sees him and Harry for the first time in 6 months. "HARRY!" Ron -" You'd think I was invisible."
and "Goyle's set the bloody place on fire AHHHHHHH."

- Ron and Hermione's kiss was HILARIOUS!

The only thing that I was so surprised and a tad annoyed about, (and it was what I was talking about before when I said they left ne thing out) was that HARRY DIDNT FIX HIS WAND!!!
Can u belive it!!!???? D:
And also i reckon the end shoulda been happier and them celebrating and stuff but it was still the most amazing spectacular movie I have seen in my entire 15 yrs of exhistence!

(wow i REALLY didnt bottle it up lol)

I can't bring myself to write a review. I just want to tell everyone in the whole entire world WATCH HARRY POTTER AND THE DEATHLY HALLOWS PART 2! I DON'T CARE IF YOU DON'T LIKE IT, JUST GODDAMN WATCH IT!

Mod
LOL Dan. Haha well I just watched the scene of voldy laughing over and over. I still cant get over it! Im so glad i recorded the bit coz it goes from when Ginny asks whos in Hagrid's arms all the way to when Draco joins his parents so it has the hug and everything LOL! the hug was so funny everyone cracked up. It was so awkward! Draco just stood there like a plank, and Dean Thomas' face was classic.

IT WAS THE BEST RIGHTT?

Saddest
- When Fred dies and you see Lupin and Tonks lying dead on the floor. That was so blood..."

I haven't seen it, but I don't need to. The book provides vivid enough images.

-Harry Potter is about overcoming evil, growing up and imagining.

Twilight is about how important it is to have a boyfriend.

Isabelle that is like the truest comment EVER! I love that! Omg soooo true. Wow i have so many twilight bagging hp photos LMAO! here is one...

Harry Potter is about bravery, frendship, loyalty, adventure, and learning to respect your enimies a bit so in the end, you beat them.

Twilight is just terribly written and is about a girl who slaves for this random pedo-vampire that watches her in her sleep. 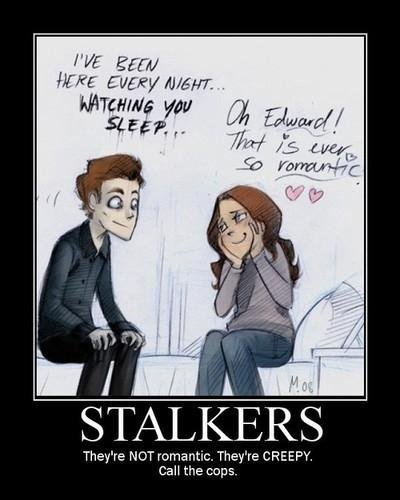 OMG LOL TO THE LAST ONE!

HAHAHAHAHAH LOL!! I love it!

HAHAAHA that Twilight pic was amazing!!!!!!!! HP7 was EPIC, and Voldemort's laugh was HILARIOUS the whole theater was laughing, no joke!!! XD

Kendall Anne wrote: "HAHAAHA that Twilight pic was amazing!!!!!!!! HP7 was EPIC, and Voldemort's laugh was HILARIOUS the whole theater was laughing, no joke!!! XD"

Jenna Lee wrote: "Harry Potter is about bravery, frendship, loyalty, adventure, and learning to respect your enimies a bit so in the end, you beat them.

Twilight is just terribly written and is about a girl who s..."

That one, on message number 12?

Kendall Anne wrote: "HAHAAHA that Twilight pic was amazing!!!!!!!! HP7 was EPIC, and Voldemort's laugh was HILARIOUS the whole theater was laughing, no joke!!! XD"

I KNOW RIGHT? And Ron and Hermy's kiss was funny too!

Yeah, but it was better in the book. XD

When do they kiss in the book again???

Anyway, it happens when Herms and Ron come back from the Chamber, and Ron's like "We should get all the house elves out" and Harry's like: "What, you want them to fight?" and then Ron: "No, but we don't want another Dobby, do we?" and then Hermione flings herself at him and kisses him XD 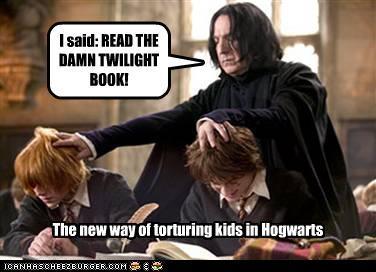 I watched that last night! XD

A Tribute to Harry Potter