Q & A With Red Haircrow discussion

8 views
Are there works in progress we should know about?

Mod
I have a number of works in progress at the moment, and details and excerpts can be found at my GLBT Bookshelf webpages The Journey of Red Haircrow. They include a mystery/horror, contemporary fiction and fantasy/speculative works as well as a sequel to my book,

Yesterday, I started on Book 2 in my series, The Night Cat, which is tentatively titled "Beauty Brutalé". It continues the darkly sensual journeys of vampire mischief maker, Katrdeshtr.

The Agony of Joy COMPLETE. 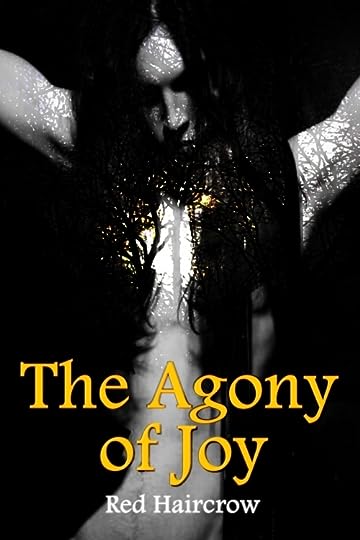 Synopsis: “Former model turned actor Adrian Lee can barely list age range ‘21-29’ on his resume anymore nor stand his life of empty social events and appearances, meaningless roles and casual partners. When he meets Alexander Skizetsky by clever arrangement of his personal assistant, the enigmatic yet infinitely attractive Russian kindles a little light of hope in his aching heart.

Yet even the beginnings of a romance beyond his wildest dreams cannot assuage a life nearly spiralling out of control as repressed memories of the past begin to take over. The long estrangement from his devout Irish family and the dark secrets they all share, combine to drive him to the brink of despair but Lexx is determined to stay by his side.

After locking away his own memories of betrayal and loss, Lexx had decided never to love again yet something in Adrian spurs the noblest intentions in his formerly jaded heart. Returning in pilgrimage to his homeland, he brings Adrian along on a journey of revelation, rebirth and redemption.”

The concept for the children of Driy, Driy being their originator or called by some, their god, was born when I was first began to write fanfiction and characters and stories that represented my life, reality and sexuality. After I spent time looking for websites to post my original ideas that included hermaphrodites or androgynes, I found many of them had a clause about “male pregnancy.” They didn’t accept such stories, and after reading a few, I could very well see why.

Naturally, most of them displayed the structure that also keeps me from reading a lot of m/m fiction, yaoi, or some works still labeled as “gay” fiction: they were merely tales where a relationship between two men was superimposed over a stereotypical heterosexual one. Somehow to these writers, for whatever reason (and I’m not knocking them to be sure) they wanted to make any successful partnership produce a child. Or conversely, the conflicts started when the more feminine, needing to be protected partner became pregnant.

As a formerly intergendered person myself, I decided why not create a credible, believable, technically fact based storyline and characters. As fantasy and science fiction was my first love, despite there historically being areas of our Earth and certain cultures that produce a higher percentage of androgynes so that it is common enough in passing, I wanted to build a world of my own.

This is an ongoing project for which I’m searching for other writers interested in giving their perspectives based on the people I’ve created. With so many angles possible, it is a project in which a variety of writing styles, personal backgrounds and views can be incorporated.

Synopsis: Starting a new life wasn’t turning out as easy as he’d hoped even though Andi Schaeffer is returning to his family’s ancestral home in Germany. After a failed affair and very public break-up with his former lover in America, life in the small picturesque town of Bad Alder is just what the former police officer is looking for: quiet anonymity and a place to regain his inner balance and calm.

But like the wide waters of Schartig Lake seen through the rear windows of the stately house, beneath the village’s calm surface lies a secret someone is willing to kill to keep hidden. Though he no longer has a badge, with the help of the quietly charismatic local polizist, Gerald Dahlke, Andi sets out to unravel the mystery and motive of murder.

The Boys Who Died

If you’ve read some of the unique things, people and experiences I’ve been privileged to accumulate over years, both good and bad, you might have an indication of why I’ve been requested by a number of people to put it all down, so I’ve began writing my memoir. It has become a driving need.

Even if no one ever reads it, it is necessary, and for those who can understand and know what I’m talking about, there comes a time when you, like the Blood Eagle, need to have such heaviness lifted to your shoulders so the pain can be released even if for a time the agony is increased. Only then can you fly free.

Do not fall into apathy or mistake the beginning of my memoir as yet another sad tale to roll eyes over. And yes I find it curious and disturbing when people do make comments like, Oh no, yet another story of abuse, because that’s not what my memoir is about.

Given the reality of mankind, unfortunately the statistics for children subjected to abuse is appallingly high (and those are the ones who report it), so “The Boys Who Died” are not alone. This is a story of defiance and triumph over the atrocities both people and life can throw at us, and how one can still find a place of peace and hope within where sorrow can never fully overwhelm you, and you can always dance even if it’s only in your mind.

“The Berlin Shift” takes place approximately a year from the ending of Night Shift.

Description: Jamie is thrilled to finally arrive in Derrik’s homeland of Germany and they begin their life together, and for a while it’s every thing he dreamed of and more as a deeper bond is forged and finally Derrik reveals his heart and soul.

Yet though their love is strong, the daily pressures of finding work, cultural differences and the apathy of Derrik’s twin brother Johann soon begins to take a toll on their relationship.

Jamie’s coming forced him to break ties with his family, there is no going back. So when the unimaginable happens he doesn’t know who he can turn to or how to survive. Is there a darker side to Derrik after all? Time and life will tell, yet he cannot give up on their love and the belief that a “happily ever after” is still possible. And Derrik, for his part, is determined to never let Jamie go.

This will be a work of literary fiction set in rebuilding Berlin, Germany circa 1955 as a trans or intergender character attempts to come to terms with their psychological and physical reality through the hardships and sometimes dangerous capital city.When he is reunited with a childhood friend who survived the war, complications begin in their friendship because the boy he is remembered as has now begun life as a woman.


The Mystery of the Mad King

A historical fantasy/mystery wherein Martin Sonnheim, a determined scholar in search of answers as to why Duke Mylin suddenly went mad, raising a militia among the middle and lower classes, then killing or exiling all members of the aristocracy, before being made king against his will. His bloody reign lasted barely a year before he was believed to have thrown himself from a tower on his appropriated palace.

Martin Sonnheim enters the long abandoned and deeply haunted estate to prove to King Mylin’s detractors than something unique was behind his overnight change of personality. He meets there a young ghost, Jennison DaNeil, who searches for his own place of death in the ruins so he can be free to move on to the next plane.

Other tentative titles: The Virgin King, The Dying Ghost.

Blurb: When his reluctant twin is informed of her betrothal to the world-traveled Earl of Darhaven, Evander wishes he might take her place. When a twist of fate forces him into impersonating his sister after she runs away, he begins to regret his agreement with his father’s diabolic plan for the Earl is no easily gulled dandy, but a shrewd eyed Corinthian who never misses a trick!”

Description: Evander is the younger twin of Evangeline, and it has been long-lamented by their father Baron Singley that he didn’t inherit her bold, brash and headstrong personality. As they come of age and their sire has unfortunately depleted their family’s fortune when an old acquaintance requests the marriage arrangement between Evangeline and his lone surviving son be fulfilled, it looks to be the salvation of the baron and his children.

Taking this announcement none too well, Evangeline elopes with a secret lover yet the Baron is desperate to have the marriage take place in order to regain his place in society. Sending a man to retrieve his wayward daughter, he enlists Evander in a diabolic plan to fool the enroute earl just long enough to get the gel back. Promised money to make his own way to the continent, Evander agrees but doesn’t plan on falling in love with Maximillian Ganthe, the future Earl of Darhaven…nor the peerless peer falling in love with him. When the impersonation is revealed.. what is Evander to do?

Mod
Works in progress at the moment are primarily my coursework towards my degree in Psychology! I'm in my 5th year of study, so its pretty intense and time intensive these days.

Also, I am researching and writing articles and reports for Indian Country Media Network, which is time consuming but very emotionally and spiritually sapping also as the issues I have to confront are ones personal and relevant intimately to my life, people and culture's survival.

Q & A With Red Haircrow