I am eagerly anticipating this movie!

I was thinking you were talking about the BBC series at first but then I see you mean the movie with Jude Law and Robert Downey. http://en.wikipedia.org/wiki/Sherlock...

I can wait. What I can't wait for is the new Sherlock BBC series by the writers of Dr. Who. Now that series has me excited.

Very cool. I had no idea there was going to be a sequal! The first was pretty comic-booky and steam-punky, but they're still fun to watch.

Hedry wrote: "Very cool. I had no idea there was going to be a sequal! The first was pretty comic-booky and steam-punky, but they're still fun to watch."

The second one seems even more steampunky. I saw a picture and holmes and watson even had goggles one! I am most eager about Stephen Fry being Mycroft though.

So I just saw the trailer for Game of Shadows before Harry Potter this last weekend. It looks.. alright. A bit cheesy but fun. No Stephen Fry as Mycroft in it though.

Joanna wrote: "So I just saw the trailer for Game of Shadows before Harry Potter this last weekend. It looks.. alright. A bit cheesy but fun. No Stephen Fry as Mycroft in it though."

i have to agree with you there. im looking VERY forward to seeing it of course. but it did look a little more cheesy and less serious than the first one. and yes cant wait to see Stephen Fry as Mycroft. perfect casting!

I died when I read that Stephen Fry was going to be Mycroft! That is so perfect. I hope I hope I hope it doesn't suck. I'm scared because I have no idea what they are doing with the plot. The trailer was just like, "EXPLOSION!" funny joke. FIGHT SCENE! witty banter.

What is it about? The Game of Shadows?

Probably. The repeated "Get that out of my face!" bit kinda confirmed that.

Sammy wrote: "Probably. The repeated "Get that out of my face!" bit kinda confirmed that."

I know. I know. During the entire trailer I was giving it the benefit of the doubt and then... "What? They repeated a line from the first one? Is there nothing new and funny in this that they could have chosen? What does that even mean there? What's in his face? I don't see anything in his face. The hell?"

I have shown this trailer to two people and they had exactly the same reaction. And what is up with the really bad drag? What happened to "You've seen me as an old lady, Watson. I was never more convincing." THAT WOULD HAVE BEEN PERFECT

Pfft. They should let us make this movie

its supposed to be based on The Final Problem. which makes me wonder if they wont end it with holmes "dying" at the end. but im like you guys. PLEASE dont let this suck. please please.

Jackson wrote: "its supposed to be based on The Final Problem. which makes me wonder if they wont end it with holmes "dying" at the end. but im like you guys. PLEASE dont let this suck. please please."

Ah, yes that's right. I would be very interested in a hollywood action movie where the hero "dies" at the end. That would be kinda awesome if they didn't make the "oh no, he didn't really die" hints until the next movie (if there is one).

Joanna wrote: "Sammy wrote: "Probably. The repeated "Get that out of my face!" bit kinda confirmed that."

I know. I know. During the entire trailer I was giving it the benefit of the doubt and then... "What? T..."

I looked REALLY hard at it to find out what was in his face, and I think it's a gun. What the heck?! And that disguise was AWFUL. He said, "but I had to make do," but he is Sherlock Holmes for crying out loud! He should be able to find at least something convincing to wear.
I hope this movie turns out to be better than we think it's gonna be. I'm gonna see the new Harry Potter movie today, so I'll get to see the Sherlock Holmes trailer on the big screen.

i know thats what i was kinda hoping for. i would be sitting in the theater grinning as all the people around me flip out thinking that hes dead haha. and then when my friends ask me if hes really dead, ill reply..."well...thats how the story ended." :D

I finally saw the trailer on Youtube. Personally I think that it looks pretty good (except for the drag of course. Sorry Mr. Downy but you can't pull it off).
Though I try not to judge movies by the Trailers. I remember watching the trailer for the first movie and thinking they were really going to mess Holmes up.
After watching how dignified Rathbone and Brett played him I tend to forget how eccentric the written Holmes was.

Yes, it would be wrong to judge it by the trailer. I want to judge it by the movie! And I hope it's really good. I love how eccentric RDJ has played him. I get into mini-arguments with people who don't really know the written Holmes so well, like, "Why is Holmes boxing? Why is Watson so young? ect." and I'm like, "No, that's actually how it's really written!"

That's actually how I was like before I started reading the novels! I saw the first RDJ Holmes movie before that, and I thought it was a little strange, since I was imagining the stereotyped sophisticated deerstalker-hat Holmes. But I understood once I actually read it. Then when I watched the movie a second time, I was reconizing tons of classic quotes!
Except for the "You have the grand gift of silence, Watson, which makes you quite invaluable as a companion" part. In the movie Watson punched him in the face after saying that, quite unlike the book.

"Except for the "You have the grand gift of silence, Watson, which makes you quite invaluable as a companion" part. In the movie Watson punched him in the face after saying that, quite unlike the book. "

HAHAHAHA that made me laugh out loud. I hope they do the same thing with the new one. I will be laughing at jokes only I understand... poking my friends in the arm saying, "see? see? did you get that? that's from the book!" and giggling to myself like a crazy person. It makes me very popular

Haha, I'm gonna be the same way. Whenever I start talking about anything that has to do with Sherlock Holmes they just roll their eyes! Well, that's what happened when I saw the movie for the second time. "OOH! That part! He said that in the book! Did you hear him?!" "SHHHH! We're trying to watch the movie!"
I really hope this movie has as many book-related parts as the first! But the first one was based on a Sherlock Holmes graphic novel, which is where Lord Blackwood came from. But I'm pretty sure A Game of Shadows will be loosely based on The Final Problem, but there's that gypsy character whose name I forgot.

Looks like the promotion machine is in full force on this movie! The clothing retailers French Connection will be having Sherlock Holmes themed display windows in their US stores. !!! Oh, I want to see that. More exciting is a sweepstakes for a private viewing of the movie for you and a guest in New York City before it opens. Also a shopping spree. I love it! I remember the 7-11 displays (Sherlock coffee? awesome!) and the lottery tickets from last time.

I DEMAND MORE MERCHANDISING AND BIZARRE PROMOTIONS.
IT PLEASES ME

So the opening weekend for this is coming up! I have plans to watch it midnight on Thursday. I'm dragging three of my friends along. Anyone else have plans to see it? The reviews seem mixed.

is anyone ready to talk about the movie yet? ive seen it twice already haha. i really did like it...however there were a few 'final problems' that i had but nothing to major...sorry for the shameless pun hehe. i must say that out of the whole thing they certainly captured the iconic scene of sherlock and moriarty going over the reichenbach falls perfectly. and im specifically talking about the fall itself. sherlocks calm expression of acceptance of his decision and moriartys rage to the very end. i have much more to say but will wait till everyone else has seen it :)

I work in retail so I won't have time until after new years. :-( I really want to see it though.

I have also seen it twice. I'm such a nerd. I LOVED IT! One of my friends says she got goosebumps during the expoding trees scene, which I must say I was having some doubts about, but the execution was so much better than I feared. Also, the fall from Reichenbach! Oh, I agree with you Jackson, it was so good. I loved the Moriarty. I think that is the creepiest I have ever seen him. Damn, there was also some serious H/W slashing I must say. Ballroom dancing? Naked Mycoft saying something to Mary about "I can see how he can enjoy the company of someone of your... gender." or something like that, i don't know I was distracted by all the naked. It's like everything was amped up to 11. Sometimes it got a bit tedious (like, does it always have to be so... loud?) but other times it was like, "OMG MORE!"

The movie was simply amazing. Mycroft was exactly as I'd imagine him to be. Oh, so much better than the first. And that ending! I wonder if Ritchie will make a third one. So want to see it again!!

Shawna wrote: "The movie was simply amazing. Mycroft was exactly as I'd imagine him to be. Oh, so much better than the first. And that ending! I wonder if Ritchie will make a third one. So want to see it again!!"

The third Sherlock Holmes is already in production, we can say, but, this time, the script will be written by Drew Pearce! :)

However, i'm agree : Sherlock Holmes 2 - A Game of Shadows is simply amazing!

I have now seen this in the theater 5 times. It is soooo good. I like it better than the first one. I also really enjoyed the soundtrack. An article from the LA times reports that Hans Zimmer actually traveled to Slovakia and got Roma musicians to play on it.

The movie is also doing really well internationally. It's been the foreign box office #1 for two weeks! I think it'll make $500 million again.

I finally got to see this movie last week and I have to agree that it was awesome. I think what I loved best though was that we actually got see Watson being a doctor, this is very rare.

I found out recently that actor Wolf Kahler, who played the King of Bohemia in Granada's Scarlet in Bohemia, also played Doctor Hoffmanstahl! Which is awesome. 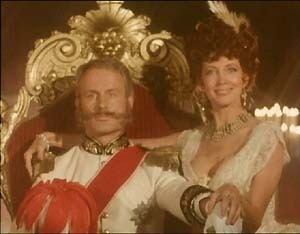