note: This topic has been closed to new comments.
76 views
Feeling Nostalgic? The archives > Do you run?

I'm teaching myself to run for the first time in my life. I'm enjoying it. I'm working up to an indoor-relay-triathlon with some friends, for which I said I would do the running stage. I don't have to go fast - it's for charity - and the time and distance are within my reach, I think. I'm 3/4 of the way there.

I always used to get weird twinges in my knees and hips if I tried running, so I stopped very quickly. I think my legs are stronger now, because they don't hurt anymore! I was always the kid who pulled up after twenty feet with a cramp in my side or some other excuse. I would never have guessed I could run.

I used to run quite a bit, but shin splints took the fun out of it.

I run a tight ship. Does that count?

Heidi wrote: "I run a tight ship. Does that count?"

Sarah Pi wrote: "Heidi wrote: "I run a tight ship. Does that count?"

I wish it burned calories.

Oh, Bun and I are parting ways now. I never, EVER thought "that looks fun." I have thought that about unicycles.

Jim wrote: "I used to run quite a bit, but shin splints took the fun out of it."

^ This, though I know I probably ran a lot less than Jim. One bout with shin splints and I've moved onto low-impact exercising.

i can't breathe when i run.

I run in the summer sometimes, not real far, anywhere from four to six miles, and not fast at all, maybe ten minute miles, but I live in an area with hills, so that's my excuse. I run to break up the usual gym machine cardio routine but I'm not a natural runner and don't love it. Are you doing stretches of the swimming and biking parts of the triathalon too, Pi, or is that someone else's part of the relay?

Your 4-6 miles and 10 minute miles are still out of my reach.

BunWat wrote: "I would like to bike more in addition to walking but its harder to bike with dog." 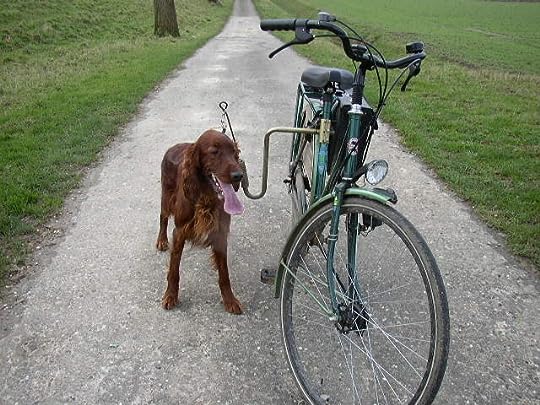 for some reason my google image search had a picture of naked people on bicycles as the fifth result, but i'm not posting that here.

I would like to run, but I have no willpower to get to it. I start walking, but as soon as I miss one day I never seem to pick it up until months down the road. Never ending cycle.

i'm perfectly content not running or doing any other regular exercise (except for walking and biking to the grocery store, university, etc.). as long as i can still skate 80 km in three days without any training i must be semi-fit.

janine wrote: "i can't breathe when i run."

That leads to dying, I probably wouldn't run if I were you.

I'm taking a running education seminar at the end of the month, in the hopes of running a half-marathon around mid-June.

Why I'm subjecting myself to this, I still don't know.

I should start educating myself about it. Lemme know if you learn anything interesting.

Just last night, I ran to the bathroom.

As Bun and Clark so eloquently put it, if I am chased or sometimes to the bathroom. Otherwise, not.

Jim wrote: "janine wrote: "i can't breathe when i run."

That leads to dying, I probably wouldn't run if I were you."

you'll be glad to hear i don't.

No running. Except to catch a bus sometimes. I like walking, walking is good and doesn't hurt. Bicycling is fun, too. And swimming!

That leads to dying, I probably wouldn't run if I were you."

Mod
janine wrote: "i can't breathe when i run."

Same here. And shortly after my lungs start burning, I feel it in my heels and knees.

I was training for a 13.1 last year when I hyper-exteneded a tendon in my foot. It is still not quite right, but I am back on Hal Higdon's training plan and hopefully it will happen this summer. I did the Bolder Boulder 10k a couple of yrs ago and that last mile killed me. It is a hilly course and at altitude. Running can be very addictive. I have a co-worker who is an ultra marathoner. He did the Leadville 100 mile trail run and finished. That is just incomprehensible to me!

Good for you, Petra! But I guess you must get pretty good exercise just in the course of a regular day's work--keeps you in shape.

I read Ultramarathon Man: Confessions of an All-Night Runner a couple of years ago. It's pretty hilarious, just for his attempts to order pizza to an intersection as he passed it, and for the absolutely disgusting menu of food he eats as he runs 100 miles.

By the way, Sarah, here's a link to the half-marathon I may or may not be running; it's to benefit the Crohn's & Collitis Foundation, and if you enter your ZIP code in the "Find Your Team" box, you'll be able to find a training group in your area that will run the half-marathon.

I still have no idea why I'm willing to subject myself to this. My wife thinks I'm insane.

also check out HalHigdon.com Tons of useful tools and info. :)

Thanks, I'll check those out. I am not even ready to think about thinking about a half-marathon.

Oh man congrats! I started walking a mile and a half within the first two weeks, then I slowly progressed to jog, etc. However, I have asthma, and I.. smoke. So it was a little bit of a slower process for me, but in the end my strong cabs were worth the struggle lol

Sarah Pi wrote: "I'm teaching myself to run for the first time in my life. I'm enjoying it. I'm working up to an indoor-relay-triathlon with some friends, for which I said I would do the running stage. I don't hav..."

OK, after a month off for my knee feeling weird, I joined the Baltimore Women's Running Festival training program. It's once a week at a local track, with a speaker and then a group run. The group is divided into beginner and intermediate walkers, and then beginner and intermediate runners. You're expected to run two more times a week, and it works you up to 5K in time for their 5K at the end of June. I'm going for it!

Thanks! And we all know late June Baltimore weather is PERFECT for running. Someone start researching signs of heatstroke just in case :)

Only when the rabid squirrels are after my nuts again.

Don't worry we got them but they had us for a while there... tallaghts' nuts were worried.

No running here. When I was 12-13 I had a problem with my heels. The bones weren't staying together correctly, so I couldn't do any sports for two years, and could barely walk without wincing. They still hurt from the pounding on the pavement if I run more than one mile.

I've been mixing more sprint workouts into my routine lately:

Holy bejesus do they kick my ass, but I think my body was getting used to steady paces. I'm also doing more interval training on the bike at the gym.

Thanks! In case you can't tell, I'm also telling lots of people so I can use that as a motivator too. I'm less likely to chicken out of something if a)I've paid for it and b)I've told people I'm doing it.

A question for runners:

I've had these New Balance trail runner sneakers, which I love, but which are losing their tread. I know that I walk and run way on the outside of my foot.

So I bought a new pair. They didn't have anything remotely like mine, but the lady at the store helped me size a new pair and she made me get a neutral sole that is actually more built up on the outside to force me a little more onto my whole foot.

I've worn the new shoes twice now, but outside so I can't return 'em though I can probably sell them. They're comfortable, but I get a weird feeling in the arch of my foot when I wear them. Not a pain, but almost a cramp or an ache. I don't know if it's cause they're forcing me to use a part of my foot I don't normally use, or if they're doing something bad, since I hadn't felt this before.
Anyone else ever felt this?

Edit one week later: Never mind. Apparently I just had to get used to them.

Pi-orama, how's your training coming along?

It's coming, thanks!
I've skipped the last two official training sessions because it was 95 degrees those days and I ain't stupid, but I mirrored what they were doing, just in the gym. I'm up to 25 minutes - trying 30 for the first time tomorrow.
I've been doing shorter runs on the big hills in my neighborhood, and longer ones at the track and the gym. Today Bo gave me a look that guilted me to my core so I took him with around the neighborhood. He did very well and only tried to trip me once.
I think I should be ready for the race by the 26th. Mostly what I've figured out is as long as I pace myself and don't stop, I can do it.

YES, you will do it and be great!

reply | flag
« previous 1 2 3 next »
back to top
This topic has been frozen by the moderator. No new comments can be posted.
Add a reference:

Ultramarathon Man: Confessions of an All-Night Runner (other topics)