As a gift for the New Year, i am giving away the FREE PDF of my first book in the Thief of Life series! No strings, no nothing, JUST FREE (promise) I love Goodreads and just wanted to give a little away! If you would like the FREE PDF file, just email me at scrapattack@cox.net
HAPPY NEW YEAR EVERYONE!
thankx, Christi Anna 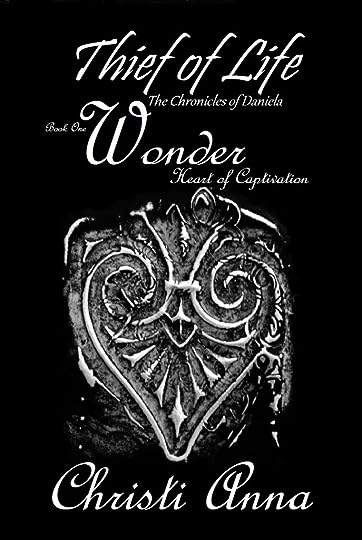 “It felt wonderful and exciting… I’ve never felt anything so beautiful in my life— and then it was terrible, like I would die!”
Creatures stir among us, warm blooded, powerfully seductive, and capable of stealing the very essence of life with a single kiss! Daniela radiates energy they’ve never encountered, strong, powerful and highly prized by a Thief of Life. Unknowingly, she’s been targeted. Some wish to love her, others to claim the life she once cared nothing for.
Believing her second chance at life is a cruel curse, the beautiful recluse Daniela Moretti wants nothing to do with love or relationships. She endures an occasional outing with her best friend Becca, but prefers to live a mundane life, alone, eating chocolate covered peanut candies and waiting for life to end. She’s sure it will be soon. Then, after a series of events, she attracts the attention of several eligible men, and instantly has a dating life most dream of. Though she wants nil to do with any of them, she cannot suppress her human desires or need for love.
Tall and well-built, with a look reminiscent of Superman, the gorgeous Dr. Robert Elliot Hollin is every girl’s dream physician. Haunted by a terrible past, he's remained single for fear of hurting anyone again. However, upon meeting the beautiful and demure Daniela, he finds that much easier said than done. She is unlike any woman he’s ever known, and is drawn to her immediately. Though he makes a point to avoid her, uncontrollable circumstances arise and Robert finds himself at her aid on more than one occasion, opening the door to feelings he cannot escape, and a past he thought was forever behind him.
The illustrious attorney Miles Chadwick has a reputation for being a bit of a bad boy, ladies’ man. Constantly late for court and skirting responsibilities, he is anything but serious about the women he dates. However, when Daniela attends a meeting with her parents at his family’s law office, she attracts the attention of everyone, including him. Enticed by more than just her beauty, he is plagued by thoughts and feelings he can’t explain. He feels fate has brought the blonde goddess to him, and becomes determined to win her attention by any means necessary. His motives could be anything but honorable.
The sweet and incredibly handsome Ryan Johnson is the first boy Daniela loved. After coming to the conclusion she was going to die, she ended their relationship, leaving him heartbroken and alone. Now five years later, he literally runs into her, finding she's still very much alive and just as beautiful as he remembers. Feeling fate has bestowed a second chance with the woman he's always loved, he sets out to reconnect their relationship. Soon he learns he's not the only contender for her affection. Devastated, but not deterred, he makes every effort to compete for the woman he has always known was his one and only true love.

Loved it! Cant wait to read more about it and please tell me she ends up with Ryan because he seems to be the one who truly loves her :)

Courtney wrote: "Loved it! Cant wait to read more about it and please tell me she ends up with Ryan because he seems to be the one who truly loves her :)"
Courtney, email me just a short review, just a few words of what you liked/disliked and I will let you preview BOOK TWO Jealousy for free also!

Christi. I emailed but didnt get my book. :(

Jason wrote: "Christi. I emailed but didnt get my book. :("

Ja, I did not recieve an email from you. Try again, and I will send ASAP! scrapattack@cox.net

That blurb is enticing... I'm in! Thanks for the offer.

Thank you in advance