Mod
Name:Aoi
Real Name:Yuu Shiroyama
Brithdate: Jaunary 20th,1979
Blood type:A
Height:5'7
Weight:110 pounds
Brithplace:Mie,Japan
Fav color:White and black
Fav Animals:Cats and Dogs
Fav seasons:winter
Fav Phrase:"Iie..(no)
Pick up line:"I like you!"
Fav person:A person to laugh
disliked person:A person who cools down quick
Best school subject:Home Ec
Pirecings:1 lip,1 right ear,3 left,1 navel.
Facts:
*When he was a child he gave his friend a kancho, (kancho is were you attempt to stick your index fingers in a victims anal area when they are not looking), and it excitted him.
*He wears clothes his fan send him.
*He owns a motorcycle and has two different kinds of licences.
*Aoi enjoys meeting fans.
*To him, Gazette means "The best partner"
*He says his rival is his father.
*The rest of the band says he has anger issues.
*In Nameless Liberty Six Guns tour he stated "I find it funny when people think I'm mature, but I'm the total oppisite."
*He's the oldest of the band.
Part:Gutair
Looks like: 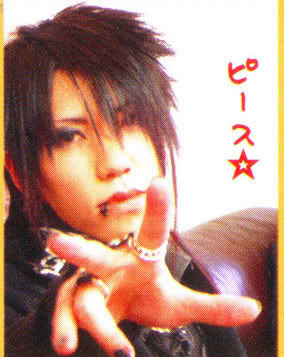 Mod
Name: Reita
Real Name: Akira Suzuki
Birthdate: May 27th 1981
Blood-type: A
Height: 172cm (5'7")
Weight: 55kg (110 pounds)
Birthplace: Kanagawa, Japan
Favorite color: Red, white, purple
Favorite animals: Parakette
Favorite seasons: Spring, he likes the air.
Pickup line: "Since I like you a lot, will you go out with me?"
Favorite person: A devoted, loyal person who is kind, giving, and has manners.
Disliked person: A person who uses bad words
Best school subject: Japanese
Pirecings: 1 ear left and right
Facts:
*He says he's gentle, but stubborn
*When he first meets a girl he looks at their figure.
*To him the whole band is his rivals
*Reita wishes he was Aoi cause he can speak 3 between Japanese dialects
*If he wasnt in a band he wants to be a candy maker
*He once threw trash under Ruki's bed.
*His most treasured thing is his fans.
*He says he wants to be macho.
*His childhood nickname is Uechan
*Rei-rei wants everyone to know about Gazette
Part:Bass
Looks like: [image error]

Mod
Name:Ruki
Real Name: Takanori Matsumoto
Brithdate:Febuary 1, 1982
Height: 162 cm (5'3")
Weight: He wont tell!
Birthplace: Kanagawa, Japan
Favorite colors: gold, red, black, purple, silver.
Favorite animals: Dogs & cats
Favorite season: Winter
Favorite drink: Kirin Koiwai Apple
Favorite person: A person who knows herself. Cute, wonderful child (he says "child" but doesnt use it literally)
Disliked person: Dirty and stupid women
Best school subject: English and Japanese
Phrase: "Did you lose it? Haa"
Pick up line: "I like you a lot, keehee~"
Pirecings: 5 or so on right ear.
Pets: Mr. Squidge (cat) & the late Sabu-chan (dog)
Family: Parents, older brother
Smokes: He failed to quit :( Pianissimo
Facts:
*Sleeps with his dog.
*Recently Ruki has been licking Uruha's guitar.
*He's been disowned by his parents, but he says their relationship has gotten a little better.
*Ruki's tried multiply times to stop smoking and failed.
*When he was a child he wanted to be a fireman
*His childhood nickname was Takasan.
*People say his a nervous person.
*He compares himself to a dog
*He has/had a motorcycle licence
*If he won the lottery he'd go on a shopping spree -He's shoplifted before
*In one of his scarest dreams he was almost killed by a cat.
Part:vocals
Looks Like: 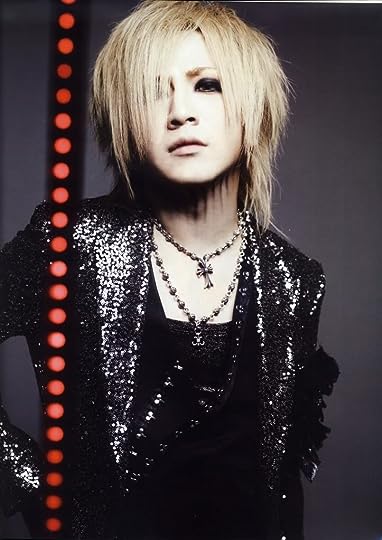 Mod
Stage name: Kai
Real Name: Yutaka Uke
Birthdate: October 28, 1981
Blood-type: B
Height: 172cm (5'7")
Weight: 55kg (110 pounds)
Birthplace: Tokushima, Japan
Favorite color: Black, red, white, green, silver, gold
Favorite animals: Dogs, tiger, crocodiles
Favorite seasons: Winter, he likes Christmas
Favorite Phrase: "Ha! What's this? I wonder what this is!"
Pickup line: "Stick with me! Keehee!"
Favorite person: An interesting person
Disliked person: A person with too much make up or looks fake
Best school subject: Math
Pirecings: Two left ear
Facts:
*He likes watching One Piece (Ohmygackt me too)
*His childhood nick name was Yukkun
*He forgets and loses things a lot!
*When he first meets a person he looks at their mouth
*He says his rival is Reita
*He wants to be Ruki for a day to mess up his room, cause Ruki's too neat and clean
*Kai collects Zippos (A cool lighter.)
*He sleeps naked if no one is around
*He just recently got his licence
*He cooks for the band and makes them lunchs.
*In an interview Kai said he worked at a restruant and the crowd said "Aww" and he laughed, someone (I think it was Kai. Not sure) shouted "What the hell was the awww for?!" haha
Part:Drums
Looks like: 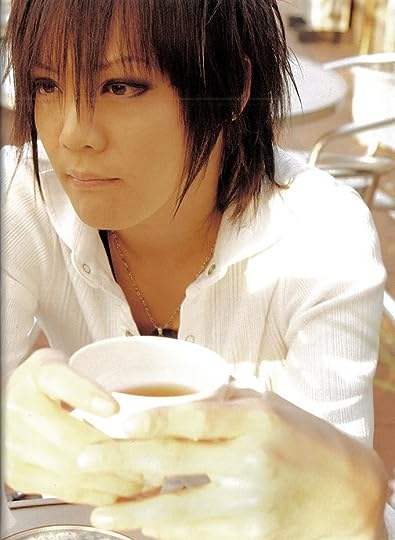 Mod
Stage name: Uruha
Real Name: Kouyou Takashima
Birthdate: June 8, 1981
Blood-type: O
Height: 177cm (5'9")
Weight: 62kg (About 136 pounds)
Birthplace: Kanagawa, Japan
Favorite color: Purple, grey/silver, black
Favorite animals: dogs, penguins, ducks, polar bears
Favorite seasons: Spring
Favorite Phrase: "Eh? You're being serious?"
Pickup line: "I like you!"
Favorite person: A person to hold him perfectly
Disliked person: Selfish people
Best school subject: Art
Pirecings: 4 right ear, 5 left ear
Facts:
*He's an uncle of two newphews.
*He often hide in his mother's skirt when he was a child
*When he was little he wanted to be a football player.
*His childhood nick name was Shima
*He's a heavy drinker
*When he first meets a person he looks at their mind and heart, personality
*He enjoys teasing Kai
*Uruha was chased by the Yakuzau (Japanese Mafia)
*He likes to be in love
*He wants to see the northen lights.
Part:Gutair
Looks like: 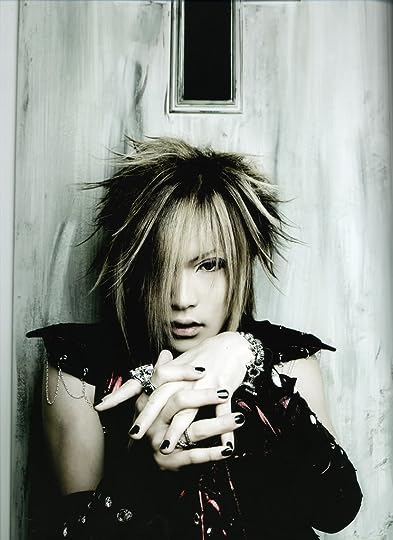 omg this is so.... ME! all these i have read are just like me.... i don't get why but im seriouse! i love all these things and dislike the same things. i hate cussing i dont drink nor even smoke or anything and i love almost all the stuff they do! exept i sleep with clothes.... lol :3 omg this is so cool.


ok so this is all me.... Ruki, Reita, Kai, Uruha, and Aoi are all my fave men and thye all like the traits i have.... but i live in Auburn, NewYork so ya.... and i love to make weird hairstyles so i am hyper, weird, cool, akward and Ect. all of the above is what i am of the traits they have and all the likes. exept i dont smake drink or do anything that will harm my body. but im only 14.... but i like them all.... so i guess if i chose i would choose Kai. i like him a lot and i also love interesting people and christmas. but number one choice is Uruha.... and yes i type to much. :3 <3