The TeenGroup of Everything discussion

Name: Lovelace Bellarose
Age: 17
Gender: female
Personality: nice, sweet, caring, silent, calm, off in her own little world often, strong, tough, can fight well, is sensative but will hurt you if needed
Mutation: like the flock, she has wings.
Appearance: flaming red hair, golden eyes, gothic style, really tall, flaming red wings with golden and dark blue spots on them, long legs, long hair that is really curly in ringlets, delicate and soft look
Crush:open
Other: is super strong and is a good flyer, can run fast, is blind, despite the color of her eyes, enjoys and feels at home when she is flying, but feels a little depressed when she lands.

Name: Raven
Age: She thinks about 17
Gender: Female
Personality: Reserved, sort of untrusting, ill-tempered, but, to those she does trust, she is willing to die for, and extremely caring.
Mutation: She has two percent avian DNA
Appearance: Straight, jet black hair, and deep purple, eyes. About 5'9" and weighs about 90 pounds. Her wings are nearly completely jet black, with streaks of purple in them.
Crush: Open
Other: Escaped from the Institute about twelve years ago. She can see in completely pitch black and control shadows.

Name:June
Gender:Female
Personality:Changes from quiet, shy, and super absorbed in a book, to chattery, energetic and wity,just depends on mood :)
Mutation: 2% avian DNA, ~~ yah!! go bird people!!
Appearance:Wavy brown hair, bright blue eyes, wings are grey-ish-blue (so they kinda match eyes) and has black tones near edges and tips
Crush: What does Crush mean??
Other: Has a weird connection with other animals (can talk to them outloud using animal talk) after some creepy mutations at the School, which she escaped from only six months ago, so still super weary..... :)

Awesome character, and crush just means who your character likes, like, to have as a boyfriend or something.

Okay I just didn't know if it was code name for something ;) soo..
Crush: I have no crush, just friends :)

Name: Jax (Hehee. If you read a certain book, his name means something...)
Age: 18
Gender: Male
Personality: Never quite content with whatever's around him, he's rather arrogant, but not overly so. He doesn't like what he is, but he's dealt with it most of his life. He isn't too used to people, but he doesn't go out of his was to avoid them. He's pretty quiet, but very stubborn when he needs to get a point across.
Mutation: 2% avian hybrid. Other mutations TBA
Appearance: 5"8' messy black hair with some length to it. (Not shoulder length long, just thick.) Noticeable abs and other muscles. His eyes are grey to match his wings, which are a good 16 feet across and a sharp, darker grey color at the top, which darkens and darkens until they become black at the bottom.
Crush: TBA, if he ever has one.
Other: He can play the piano, and has a rich, but not overly deep, voice. He barely speaks though, and although he's taught himself how to sing as a younger child, he hasn't sung since. He knows nothing of social interaction, especially female interaction, and doesn't exactly care to know anymore than he does.

Name: Lyndenn (Den)
Age: 16
Gender: Female
Personality: Fierce, she doesn't like to be around people much. She keeps to the forest, her solitary home. She's always been running, afraid of the ones that made her the way she is. She doesn't really know how to be gentle, but she does have a strong curiosity of things, even if she'd rather only know what they are instead of getting to know them personally.
Mutation: A Stray Eraser who, somehow, was not killed in the massive wipe-out.
Appearance: 5"6' with corded muscles from a rough life, she has very, very dark brown hair. Her eyes are a hazel color, and she has scars in multiple places on her body. The most distinguishing scar is one slashed across her left cheek, starting just a centimeter on the outside of her eye, and curling down to rest just below her jaw. The scars mar her face, and she can't be considered pretty because of them.
Crush: None. She's a loner.
Other: She's taught herself how to fight for self defense, and she only hunts by becoming the Eraser wolf. 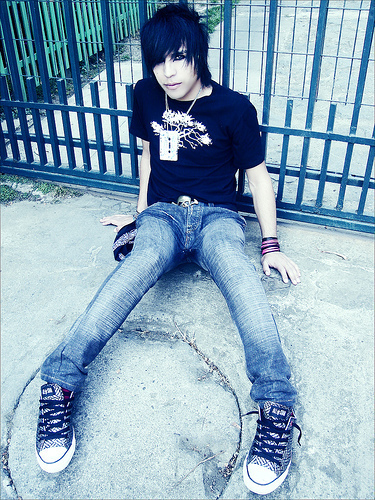 Other: He has pure b;ack wings with white tips.

Hey, Campbell, can Ve(Lovelace. :)) and Jax hint at being,., beneficial friends? Sorry for code, I'm trying to keep it of, but...I think you understand what I mean. Just hint at it? Nothing more, though. :)

As long as they haven't yet met, and will meet in the Roleplay at some point, sure. :D