Full Name: Elizabeth Pearl Vandohph
Age: 20
Gender: female
Physical Description: She's tall and slender. She's nicely built. Her hair is long and rolls down her back in waves. It's a dark-ish brown that looks purple-ish red in the sun light. Her eyes are a soft mossy green.
Emotional Description: she's very sensitive. Someone could make her cry very easily, but she tries to hide it as best she can.
Philosophical Qualities: idk
Bio: When she was a little girl her father was with her all the time. Her mother had died at childbirth, because of some kind of seaside that gave Elizabeth her power to read dead languages and cast spells. Almost like a witch. She's been on her own since she was 12 and her father was murdered. She uses wards to make people leave her alone. She didn't go to school after what happened to her dad so she doesn't know much except for her spells. But she's hoping to find someone who could teach her.
Family/Relationships: Her mother died at child birth and her father was murdered.
Back Story: ??
Powers/Extras: (Three per person) she can read every dead language there is. She can cast spells from spell books(like a witch).

reply | flag
message 2: by [deleted user] (new)
Sep 19, 2010 03:51AM
Full Name: Brielle Anne Enid Smith
Age: 12
Gender: F
Physical Description: Dirty blonde hair that is straight, and falls down her back. Blue-green eyes. Very pretty.
Emotional Description: Tough. A bit random and dreamy.
Philosophical Qualities: To be rp'd.
Bio: She lives with her mother. Her father died when she was two. He killed himself because he watched his brother die. She doesn't like to talk about it.
Family/Relationships: Her mother.
Back Story: ...
Powers/Extras: She can summon people and make them feel certain emotions.

you take the fun out of me sometimes Zoey

Mod
I did not see my name on that list! WOOT.

Full Name: Anthea Steele
Age: 19
Gender: Female
Physical Description: [image error] In the sun, her hair has touches of gold in it. Her eyes are a deep, deep blue.
Emotional Description: Stoic, tough, although on the outside she's innocent enough that people will protect her.
Bio: She's very protective about her hair. Mess with that, you'll wake up with your throat slit and rats playing in the pools of your blood.
Family/Relationships: She was married, once. Now she's divorced. It lasted about three months.
Back Story:
Powers/Extras: She can shapeshift-when she's an animal she can talk to any other animal, copy anyone else's powers for a limited amount of time, and can also control plants.

Mod
Well, let's put it this way. Do YOU want to wake up with your throat slit and rats playing in pools of your blood?

Mod
*Sighs* Must I do everything? *Pulls out wand*

Mod
But... You're still alive! I mean, sure they had to remove that extra nose on your knee, and sure you got a concussion, but now you have a great story to tell!

Mod
*Crashes into the ground* *Tries to squirm away* You'll never get me alive!

Oh, but do you like my student ID card?

Mod
Of COURSE I do. I just hide it in my left sock so tackling people such as yourself cannot find it.

Mod
Well yes, until you tackled me so I could pay your bill!

Mod
And now Inigo shall kill you!

Mod
Inigo Montoya? You killed my father? Prepare to die?

Anyways, yes. He shall kill you because you now have six fingers. HA.

Mod
Can I do spells on you??

Zoey *Spoon Sucking Ninja...BEWARE* wrote: "Joey, Havox, Me, Austin and Sadester are banned from this one. Got it?

Mod
Whoa. I should fix my character then, eh?

Mod
I don't know, but it makes me sad!

Mod
Actually, it's probably because you banned all the active people from this one. (:

Can I be a witch/sorceress person? Pleeeeeeease?

Full Name: Medea Ourobori
Age: Pretty darn old, but I'm not sure since soceressesess aren't up there (what's the plural anyway?)
Race: Sorceress/witch
Gender:female
PhysicalDescription:http://i40.photobucket.com/albums/e22... (this was the best pic I could find)
Emotional Description: She gets angry v. easily (a bit bipolar), her emotions are very strong: when she hates someone she REALLY hates them, when she loves someone ditto. (she doesn't really have people she feels meh about.)
Philosophical Qualities: Very intelligent, I guess...the rest in RP
Bio: Not exactly sure of her childhood per se....her main goal in life is the quintessential witch goal: maintain an outward appearance of youth and beauty. Which she has to do various things to achieve. RIght now she has a supply of a something that keeps her in this state but the something is running out and as far as she knows its the last in the world. (Is that OK w/ your idea of witches, Joseph, or should I change her?)
Family/Relationships: She has a son--or maybe a daughter--not sure yet--whom she loves and would do anything to protect. Other than that she's pretty much evil/doesn't like anybody else. Mua ha ha ha.
Back Story: Um... idk, except that the father of her child broke her heart and left her with the kid. (Yeah, she's basically every fictional evil witch slash sorceress mooshed together. Cause I'm just that original.)
Powers/Extras: (Three per person) She has relative control over fire (i.e. can shoot it at people, yay), she can control minds/put binding charms on people, aaaaaaaand the third will b introduced in the RP when it's needed, because I can't think of it now.

Well as i see it yes, but a which isn't a race, just more of a title, the races i put up are just some basic ones,

and technically any race can use magic so go for it !

Mod
Oh yay! I'm glad someone else BUT the one it didn't apply to got the message. (:

Full Name: Shawn Oran
Age:19
Race:Elven
Gender:Male
Physical Description:Tall, Green eyes, Light brown hair that just hangs into his eyes
Emotional Description:Troubled because of his past, quick to anger, slow to forgive
Philosophical Qualities:
Back Story: His father was a dragon tamer, and often took long trips into the mountains to work and commune with the great beasts. One day, when Shawn was 9, the dragons, who had been losing patience with humans over the last few months, attacked his home village. His whole family was killed in the incident, along with almost all the villagers. Shawn was greatly tramitized and he blames his father for the event, as he was suppose to be the "Great Dragon Tamer."
Family/Relationships: All known family killed in the dragon attack.
Powers/Extras: (Three per person) Dragon Tounge-- Can speak and understand all dragon launguages. Can manipulate Fire (more to be revealed in rp)

Full Name: Violet Wystira
Age:18
Race:Shadow
Physical description:Tall, glowing violet eyes, Long black hair
Emotional:Very uneasy to trust, protective of those who actually make an effort to be nice to her
Philosophical Qualities: Intelligent...Read RP to find out more
Backstory:??
Family/Relationships: Noone knows her in the Wvern world, master perished
Powers/extras:good at manipulating all element(except for fire!) Good at moving around without being seen, but only when noone's looking for her

Mod
Oh good! The woman moving into my basement has breast cancer...

reply | flag
message 42: by [deleted user] (last edited Oct 24, 2010 08:05PM) (new)
Oct 24, 2010 12:55PM
Full Name:Ginger Lee Fortch
Age:18 almost 19
Race: Elven
Gender: Female
Physical Description: http://b.imagehost.org/0021/the_elven... Strawberry red hair with striking green eyes. Olive skin. Fairly tall for an elf.
Emotional Description: Depressed but puts on a happy face around people.
Philosophical Qualities:
Bio:A younger girl who is strong willed but quick to loose her temper and break down crying.
Family/Relationships:Family stopped talking to her when she was 13,(not mother) for all she knows her family could be dead.UMM Shawn if hes not taken....
Back Story:
Powers/Extras: Can read minds, talk to animal and plants. 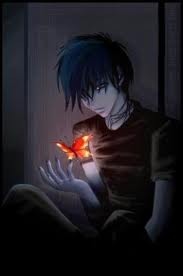 Emotional Description: Mostly keeps to himself, but cares deeply for his friends (what few he has)
Philosophical Qualities: Wuuuut?
Bio: Has been an orphan since he was 2 (may add more later...)
Family: His sister Katja
Crush/Relationships: Ginger... (apparently)
Powers/Extras: Farsight, can see farther than any human or elven eye. Steady Shot, he ALMOST never misses with his bow
Other: He uses a bow and a sword he inherited from his 'father'

Lol, we're going to try this... but we're friends in real life so if it doesn't work out we're breaking it off.

Lol... sorry we can be confusing. 'Cause we're on the inside of every joke or thing we say... but no one else is.