Mod
A rather morbid, sombre manga about two high school students, Kamiyama Itsuki and Morino Yoru, who have a peculiar interest in deaths and especially in murders that are committed near to them. Due to their strong fascination with murder and highly-developed analytical skills (along with some luck), they manage to solve the murders that have even eluded the authorities. However, acting on their own sense of justice and in self-interest, the murderers are often able to escape with the murders that they have committed. Often, it is Kamiyama that solves the cases even to the most subtle of details, but he is only interested in one thing, and that is the method by which Yoru should be killed. 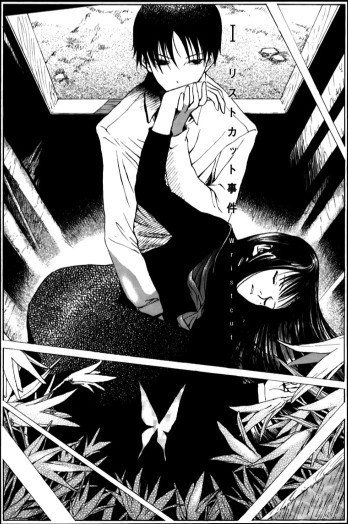 This one is a like or hate manga. I adore it for its morbidness and no true happy ending and being able to see into the mind of a psychotic killer.
But like I said you either like it or hate it.

sounds pretty awesome, so the boy wants the girl dead? does he like her(in a weird psycho way?)

Mod
I think he does, he has an obsession thing her wrists as well...

Mod
In a way, but it isn't as bad as some people, like the teacher in the first chapter cut off people's hands and kept them in his fridge and thought they spoke to him...

Mod
Unless your psychologically/mentally not all there.

Mod
Yeah. He went even more crazy when the hands were stollen.

Mod
Itsuki did and in a way framed Yoru to catch the teacher and get him to quit.

Mod
Itsuki is the boy and Yoru is the girl.

Mod
I like Itsuki better, there is something about him that made him more likable...maybe it's because after you get to know Yoru she becomes annoying.

Mod
Her personality is different when she opens up more...>_< It's hard to explain since I haven't read GOTH in around a year.

Mod
Yeah. I plan to re-read it soon, but I've been buried in other things.

Mod
Yeah, I got it when I was sixteen since I explained to my mum that it there was no sex in it...so she paid the $9.99+tax.

Of course just over a year later I got her to get me the Kick-A*s comic, since I was just over a month off of being eighteen...>_< Although I paid for that one...$22

Mod
I'm sure you can find it at a store. Hopefully unwrapped, like the one in stores here at the moment.

Mod
Yeah. I was amazed I find an unwrapped one after owning the book for a year.

Mod
Yeah.
Or this:
http://manga.animea.net/goth.html