Has anyone had to deal with the issue of copyright infringement of fictional trademarked characters? I am working on a whimsical young adult fantasy story that features a teenager thrown into a world of talking frogs waging a medieval war. The story is meant to be humorous, sarcastic and satirical. One of the characters is named Colonel Kermit. Obviously you know why I chose that name. In fact, the character even states, "Kermit? Are you kidding me?" and later, at the end of the story says, "Say hello to Miss Piggy for me," to which the Colonel has no idea what he's talking about.

The question is: is this copyright infringement? I've had one beta-reader suggest that I just change the name of the frog character to avoid the issue altogether, but it is that association that makes it funny in the first place.

I've scoured the internet for articles about this subject and whether I should worry about getting sued by Disney, but the best I could conclude from my research is 'maybe.'

In a similar vein is: can you get into legal trouble for parodying real-life people (specifically, political figures)? I would think not, as long as you are not slandering them, when you consider that comedy shows such as SNL do this all the time. Nevertheless, in the hypersensitive world we live in these days, I guess you can't be too careful.

If I can find a publisher, these questions would become their concern, but if I go the self-publishing route, well, I don't want to get myself into major trouble.

I'd like to know if anyone has had any legal or personal experience in this area.

It's just an association, not the actual "Kermit", then Disney would come after you.

As far as parodying real-life people, as you mentioned, it's done all the time on t.v., why would they come after you and not them?

I asked a lawyer this very question because I wrote a suspense novel where one of the main characters looks just like "Prince". I was told there could be no legal case against me. I'm not slandering Prince in any way, and it's just a likeness of him. The entertainment world does it all the time. If he comes after me, he has to go after everybody.

I have said something about Prince in another one of my books that's doing pretty well. Haven't heard from him, yet:) Hope this helps.

Personally I would just parody the names as well. Sir Kermith of Hogg's Wallow. :D And Lady Pigatha of Frog Chaser Marsh. :D

Just an example. Probably a bit to crude. 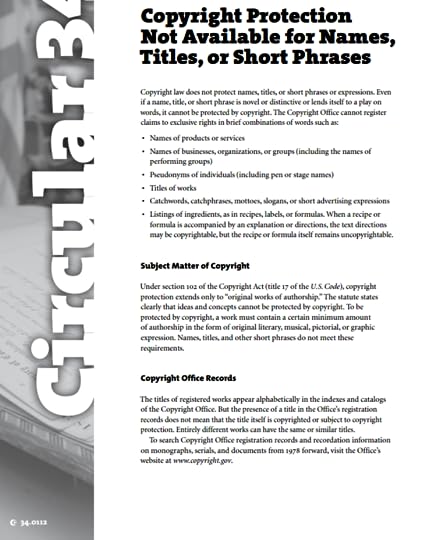 To present a humorous or satirical portrayal of an actual fictional character or real person does not meet the criteria for copyright infringement. Parody and copying are entirely two different things.

Names cannot be copyrighted, true, but they can be trademark, which is almost the same.

G.G. is correct. In many instances, a publisher and/or author will file a grant of merchandise licensing petition with the U.S. Patent and Trademark Office. If granted, no one can use the specific name, character, or item without permission. Again, it should be noted that this would not prevent anyone from parodying said character or item.

There is also the point that it is not just you. If your publisher fights shy then he won't buy it. You need to decide whether it is worth that.

I changed the names of my gerbils in a recent book to avoid the same issue.

The gerbils are based on our pet gerbils, who are called Bilbo and Baggins, but for the story I called them Sooty and Scamp, because they're more generic names, and I'm not sure if I'd have an issue after using the names; even though the Bilbo Baggins everyone is familiar with is a hobbit, and I was using the names separately for a pair of gerbils.

Some good advice, warnings and cautions given above, and it highlights the fact that it is a very sticky and gray area. If it comes down to a choice between obtaining traditional publishing and changing the name, well, I might let my principles bend a little. If, however, I choose the self-publishing method I may let it ride since the book would most likely remain in relative obscurity. Hence, (or maybe I should say Henson), no harm - no foul.

G.R. wrote: "Some good advice, warnings and cautions given above, and it highlights the fact that it is a very sticky and gray area. If it comes down to a choice between obtaining traditional publishing and cha..."

G.R.,
Go for it! Since your use of the characters' names is parody, there is no copyright infringement. Even if there were an issue, unless a book becomes a mega-hit, resulting in a huge sum of money in the way of net-profit, the chances of anyone going to the trouble and expense of legal action is nil.

I wish you success.

Jim wrote: "Go for it! Since your use of the characters' names is parody, there is no copyright infringement."

Thanks, Jim. I've found your posts over the years in these GoodReads forums to be very informative, helpful and professional. Please keep it up!

It's one of those things where it may or may not be an issue. It depends on the name your trying to use and whether or not the copyright for who has it is touchy about it and its also about preference. As long as they don't have a problem with it feel free but if there's a chance it may come back to bite you then better safe then sorry.

Great question, and great answers here. Thanks, G.R. for starting this thread.

My question is a bit different... what about making reference to titles (e.g. song, book, movie). If I want to reference a written work by its title, can I do that, as long as I'm not copying text from said work?

In the world of non-fiction, authors quote references and passages from others, and I'm confident they don't go and solicit permission from the owners of every single work they reference. I don't see why it would be a problem to mention titles, names of fictional characters, names of real people, or even brief quotes from other works.

Michael,
Book, song, movie, and stage production titles, like names are not protected by copyright law. However, lyrics and dialogue are. If quoted, they must be designated as such by quotation marks and an asterisk, and the source revealed and credited.

Yes, that is exactly right. That is what I learned from some of my searching around for answers on the internet. I also have a couple lyrics from a song in my book and I need to make sure I give credit where credit is due.

The same is definitely true in non-fiction. I have written many papers in the scientific community and proper citation for referencing others' work is a must.

Jim wrote: "Michael, ...lyrics and dialogue are. If quoted, they must be designated as such by quotation marks and an asterisk, and the source revealed and credited."

I'm guessing not all works have to be credited if quoted. For example, I have Biblical quotes in some of my work. I'm fairly confident that one is in the public domain.

Michael wrote: "Jim wrote: "Michael, ...lyrics and dialogue are. If quoted, they must be designated as such by quotation marks and an asterisk, and the source revealed and credited."

The Bible has been translated and re-translated so many times that the words and their meanings bare little or no resemblance to the original concepts and philosophies expressed in the earliest Hebrew, Greek, Syrian, or even Latin versions. The authorship of almost all of the texts is questionable, so as you point out, the books of the Bible are now public domain.

Thanks, Brenda... I'm using the King James version, so I should be safe there.

Definitely out of copyright -- they don't call it King James for nothing.