Mod
The Book of Blam 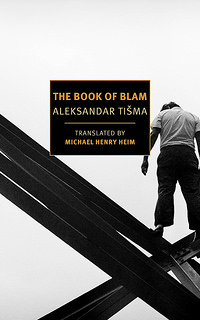 The war is over. Miroslav Blam walks along the former Jew Street, and he remembers. He remembers Aaron Grün, the hunchbacked watchmaker; and Eduard Fiker, a lamp merchant; and Jakob Mentele, a stove fitter; and Arthur Spitzer, a grocer, who played amateur soccer and had non-Jewish friends; and Sándor Vértes, a lawyer who was a Communist. All dead. As are his younger sister and his best friend, a Serb, both of whom joined the resistance movement; and his mother and father in the infamous Novi Sad raid in January 1942 -- when the Hungarian Arrow Cross executed 1,400 Jews and Serbs on the banks of the Danube and tossed them into the water.

Blam lives. So long as he does, the war will never be over for him.

Like The Use of Man , The Book of Blam is a searing look at the spiritual devastation of war.

Mod
This is out today!

Mod
Posted my review of this fine novel here on my blog.

This is actually part of a trilogy (I've seen some review somewhere say a Pentateuch, so maybe more) of novels that take place in Novi Sad, including The Use of Man and Kapo. Surely NYRB Classics has Kapo in the line-up for sometime in the future, though it doesn't look like it will be 2016 as I've got that slate up through November 1 in the forthcoming thread.

At any rate, this is an important release, and I hope it shines the light on Tišma that seems to have dimmed since these books came out in English in the 1990s.

Just finished this and loved it. Will read the other two soon.

Just received Kapo in the mail the other day. It’s this month’s book club selection.

All three in the trilogy are worth reading. Collectively they are a 5 star!