Sure! Should we make characters or just jump right in? 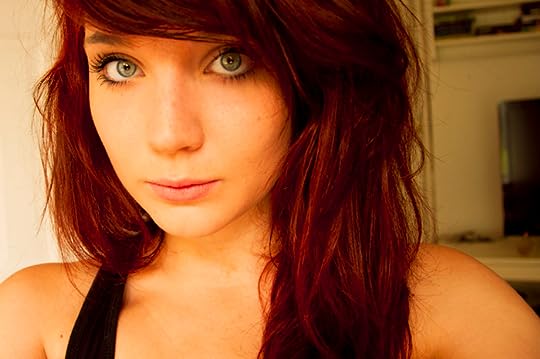 The picture isn't showibg is it a girl or boy?

Reload the page, its a girl

Hmmm, we can let that develop through out

Al was sitting quietly, as usual, in her bunk in the barrack styled rooms she and other teenagers were accustomed to. She had a small knife in her hand along with a grindstone that she was running along its length. "What to do... What to do..." She murmured to herself. Al set the knife down and hopped off of her bunk, making sure not to hit her head on the stone ceiling. "It's almost breakfast. Doesn't hurt to get there early." She mumbled. She was heading out a bit to early. As usual, she had woken at dawn, before anyone else in her barrack. She always woke up this early and no one knew why. It just happened. It was in her genetic code. Al stretched her arms in the air as she walked out of the room already completely dressed.

reply | flag *
message 18: by [deleted user] (new)
Feb 01, 2015 08:05PM
Alanna woke up in the transfer room and looks around automaticly to see if she had waken anyone up. She sees she had not and climbs down quietly to get dressed. She grabs black leggings and a jacket and puts them on

Al's black leather combat boots pounded against the hard stone floors of the corridor as she made her way through the compound that was her home. She made her way confidently past every twist and turn and curve and corner until she found herself just outside the cafeteria doors. She tugged lightly at the handle; locked. "Damn." She cursed under her breath and then sat with her back against the heavy doors. Her stomach growled and she pressed the back of her head into the door. "I just want something to eat." She groaned.

Al looked up at her and puckered her lips. "What are you doing up this early?" She asked with a stone face. "Seems a little early for a transfer yeah?" Al slowly made her way to her feet and walked over. "Headin' to the chasm I assume?" She nodded and pointed. "Its pretty awesome when no one is around it. I've made my way out at night to see it before too. Go on and look at it. But I'm coming." Al smirked and started walking down the corridor again.

reply | flag *
message 22: by [deleted user] (new)
Feb 01, 2015 08:22PM
Alanna follows and looks down in the chasam and immidiently her stomach tightens as she gets dizzy looking down at the deep drop. She takes a step backwards. Alanna looks at Al ready for an insult

Al was leaning against the railing with her cheek in one hand. She shrugged at Alanna and then looked down into the depths below. "Startling, yeah." She nodded. "All the transfers usually are." She murmured. "But I grew up with this thing staring right at me. It took my friends yet I still had to live with it." She sighed. "And now im used to it."

reply | flag *
message 24: by [deleted user] (new)
Feb 01, 2015 08:28PM
Alanna drops to the ground "everyone of the transfers hate me. I'm a Stiff. I'm litteraly considering to throw myself out into this chasam. I'm the weakling. I'm gonna be factionless" she says, leaving out she's divergent

"Keep thinking like that and I'm gonna go ahead and throw you over myself." She hissed. Her voice was like that of a snakes. "I doubt your weak. Everyone is strong. No matter what. There is always that little speck. Speed, agility, strength, power, intellect. Something."

reply | flag *
message 26: by [deleted user] (new)
Feb 01, 2015 08:35PM
Alanna straightens up and pushes her against the wall "listen, I'm gonna get killed okay?! " she hissed "I'm gonna get killed because of that stupid little aptitude test. I thought I wad normal. Nope!"

Al grabbed Alanna's hand and twisted her around. "Don't touch me Stiff." She spat. "I was trying to be fucking nice but it seems you're just another little brat that thinks she knows whatever the fuck she wants." Al released her wrist and turned around. "Have fun trying to fight."

reply | flag *
message 28: by [deleted user] (new)
Feb 01, 2015 08:43PM
Alanna stayed where she was but felt a clod hand on her back. Then one over her mouth. Her instincts kicked in as she stayed stiff. She prayed "please be a nightmare" she thought. She felt another hand on her throat

Al continued walking away because no sounds were being made out of the ordinary. She turned down a corridor as she yawned into her hand, "See you later, Stiff." She called with a small laugh. "Training'll be fun..."

(I'm going to play as the person)

He grunted as he fist connected with her nose. "Knock it off." He hissed. He moved the hand from her throat down to her wrist so she couldnt moved her arm.

"Damn right, Stiff." He growled. He started to push her over the railing. "I hope you have fun hitting the bottom of the pit." He laughed. "I can't wait to hear your body hit the bottom."

He grunts and stumbles backwards a few steps. "Alright small fry!" He shouted. The person lunged forward, trying to grab her arms while rage captured his face.

He grunted as his arms were pulled. "Okay! Okay! I understand!" He cried. "Im sorry!"

He scrambles off down the corridor with blood dripping from his nose. "What the hell?" He cried. "Fuck you Stiff!"

Al was still waiting quietly outside of the cafeteria as the first worker came to open it. "Hey Lizzie." She smiled.

"Here to open the cafeteria for me?" Al asked with a soft laugh. She stood up and stretched her arms towards the black stone ceiling.

Alanna flopped back on her bed

"Good." Al laughed. She waited patiently for Lizzie to open the door and then stepped inside. "Want me to help get the food?"

By the time Allana had woken people were already flooding through the cafeteria. Al was sitting in the corner with her tray.