The second book in my children's mystery series is coming out February 17th! It's on pre-order for Kindle at $2.99 right now! The page listing is currently being corrected by Amazon. It's 90 pages, not 50, when in the 6 by 9 print edition.

The first book is just 99 cents on Amazon!

Laura’s world spins as pediatricians throw words at her like heart failure, seizures, and g-tube feeds...when all she wants is to hold her baby tightly and be the mom she’d always dreamed of being. Join Laura on her unexpected and emotional journey in this best-selling, award-winning, true medical drama/unconventional love story. Just $9.95 in paperback, $2.99 on Kindle, FREE to Kindle Unlimited members! http://getBook.at/With-Angels-Wings-u...
http://www.withangelswings.net

In a hidden mountain town, a young woman is forced to come to terms with her mountain home and her family's heritage as supernatural beings. Being the last of her generation to come into her initiation with her wolf, Sara Beth quickly becomes a piece in a power hungry wolfs plan to steal the pack from the current alpha. Lies, secrets and intrigue overflow into Sarah's life as she is thrown into the danger head first and left trying to tread water to survive. Friends become foes, teachers reveal more than she dreamed and her family grows in unexpected ways.

The Initiation is 2.99 for Kindle users and Free for members of Kindle Unlimited!!

Thank you to everyone who has bought the book so far or gotten it from KU. It is very much appreciated!!

With the third book in the series coming out in March, good time to say both books of the Dawn of Steam series, Dawn of Steam: First Light, and Dawn of Steam: Gods of the Sun, are 2.99 on kindle (First Light also available at B&N and Smashwords)
The Dawn of Steam series is Epistolary format (letters and journal entries), regency-voiced alt-history/steampunk, as the characters tell the story of their journey around the world in a Napoleonic War era dirigible - opposed by a rival crew who will stop at nothing to stop them, political intrigue and the elements - set agains the backdrop of the Year Without a Summer of 1815-1816.
http://www.amazon.com/Jeffrey-Cook/e/...

Bioprints
READ FREE on Amazon or OWN Kindle Edition $2.99
http://www.amazon.com/dp/B00HFF8D48

In the first book of the O'Rourke Crime Novels series, Ryan O'Rourke, an insurance fraud investigator, learns that his best friend has been murdered and is compelled to bring the killer to justice. From the beaches at Malibu to the cornfields of Illinois, Ryan and his team are drawn into a web of murder, mystery and suspense. Romance also finds it's way in as the team puts their lives on the line. The downside of 3D printing technology is exposed when a mad scientist goes rogue and pulls out all the stops to cover his tracks. Laugh and cry with Ryan as he loses his best friend and meets the love of his life.

In this classic detective fiction style novel, the team is brought in to investigate a theft from a high end jewelry store and an alarming disappearance of narcotics at a local hospital. It's a fast paced novel involving brothers, twins, cousins, flash mobs, the Chicago Mob, a Latino Gang and...zombies. Most of the book takes place in the western suburbs of Chicago.
This entertaining, suspenseful and often humorous novel will keep you turning the page to see what happens next. As an added bonus, a romantic surprise awaits you at the end.

The O'Rourke team is at it again as they work against the clock to rescue one of their own. It seems the Mob didn't take too kindly to the O'Rourke team's involvement last spring that led to the indictment of their Mob boss. To complicate matters the team is called in to help solve a nationwide plot involving the assassinations of several U.S. Senators. Who is behind the horrific plan and why? Is it the militia? Terrorists? A homegrown wacko? CLONE DRONES weaves together a fascinating story that could be a part of the news in the near future.

This Suspense/Thriller centers around Kelly Price, a domestic violence victim that believes obtaining a protective order against her husband, Eric, will saver her life. Suddenly she is receiving mysterious phone calls from an anonymous caller, threats and prowlers. She ends up in a race for her life. Book one in a series.

The Dazzling Darkness (Crispin Books), a supernatural mystery. Do you believe in ghosts?

Night Sea Journey, A Tale of the Supernatural (Crispin Books)
Supernatural thriller with angels and demons.

SAN FRANCISCO BOOK REVIEW ★★★★★ "NIGHT SEA JOURNEY is like reading a Dan Brown book with a wicked twist: it has real demons. Readers will be taken on a continual thrill ride, impossible to put down, a fast-paced thriller."

★★★★★ Grady Harp, Amazon Hall of Fame Reviewer Gives 5 STARS to Paula Cappa. “A talent that will draw even those who are not keen on supernatural stories into her fold.”

Night Sea Journey, A Tale of the Supernatural

Chopper Music - What would you sacrifice for a longshot at redemption?

Nightclub bouncer Jackson Reilly’s world revolves around drinking, smoking dope, casual sex with bar girls, and riding his aging Norton 850 Commando motorcycle, but his life was once a lot different. As a child he was a piano prodigy. For mysterious reasons he gave it all up when he was thirteen, and he's been at war with the rest of the world ever since.

It takes the death of his mother and a re-connection with his aging Auntie Jo, who once played piano with some of the cream of the fifties’ jazz scene, to make him see that what he's really been battling against for all those years is his own destiny.

After years in the dark Jackson finally learns the meaning of ‘follow your bliss’, but has the lesson come too late?

My superhero novel POWERLESS is $1.99 on Amazon/Kindle.

"My name is Martin Molloy. I haven’t used my powers in almost two decades. I’ve been a night security guard for four years and not had a panic attack for nearly ten months.
Then my old teammate and best friend Vincent is murdered by another power. My carefully constructed solitude crumbles around me as the Police, the Powered Crime Agency and the rest of the team search for answers.
All I want is to find out who killed him without having to dredge up too much pain from the past, but when the super-powered killer comes after me, all I am left with are nightmares."

POWERLESS is a British-based superhero thriller. A 1990s team of celebrated superheroes split after a series of horrific events. They are living very different lives in the present day, where it is now illegal to use powers in public. When one of the team is murdered by another hero, Martin must find out who the killer is without attracting too much attention to himself.

Magic-Scars is the newly released 2nd installment in my adult epic fantasy trilogy centering on a man with an innate addiction to magic.

"Magic Scars is a delicately orchestrated odyssey...Schneider once again takes us through his story with such attention to detail and such precise imagery that you cannot help but get engrossed in this book!"

If you haven't picked up book #1(Magic-Price), you can download it for only $2.99. To learn more, please visit my website
http://www.clschneiderauthor.com/

Hi, all, my little picture book, HAPPY, just came out on Kindle! 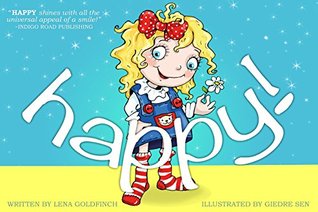 SUMMARY
"HAPPY shines with all the universal appeal of a smile!" Indigo Road Publishing

Just plain fun! HAPPY is a short lively book with vibrant illustrations and a subtle touch of humor, perfect for the Kindle Fire, Kindle app, Smartphone or tablet.* Pull this fun little story out in the checkout line -- or that crowded restaurant. Smiles guaranteed.

This title is available on Kindle Unlimited.

*A toddler / baby picture book for Kindle Fire and other supported devices.

is $2.99 and the whole series is free with Kindle Unlimited.

AWOKEN:
Around the world humans are hallucinating after sleepless nights.

In a sterile, underground institute the forecasters keep reporting the same events.

And in the backwoods of Texas, a sixteen-year-old girl is about to be caught up in a fierce, ethereal battle.

Meet Roya Stark. She drowns every night in her dreams, spends her hours reading classic literature to avoid her family’s ridicule, and is prone to premonitions—which are becoming more frequent. And now her dreams are filled with strangers offering to reveal what she has always wanted to know: Who is she? That’s the question that haunts her, and she's about to find out. But will Roya live to regret learning the truth?

This sale isn't running long so get you some.

With this code ZU47K you will pay 1.75$ for my poetry e-book on Smashwords, which is 50% less than its regular price. https://www.smashwords.com/books/view...

I Was Thinking the Other Day About...

Devotional/Inspirational readings with the theme that God's goodness and greatness are all around us in the small and large things in life, and He is with us every step of the way.
Kindle $2.99

The first two books in the Relic Hunter Series are 99 cents each.
http://tinyurl.com/p6d3mb6 Elementary MagicUnplanned Magic

David Menon
'The Wild Heart' Killing is easy when you believe it's the right thing to do.
http://www.amazon.co.uk/Wild-Heart-So...