This sketch was first published in October 1836 in the Morning Chronicle and, as the title subtly intimates, it is about Doctors' Commons, which was originally a college of lawyers and later became the domicile of five courts of law. It will also play a role in David Copperfield, and it certainly played a role in Dickens's life in that in his youth he worked there as a shorthand writer for the proctors in the Consistory Court. Doctors' Commons was demolished in 1867.

In the Sketch itself, the narrator gives a satirical account of a trial in which a man is temporarily excommunicated for insulting another man on the premises of a church, and I especially like the outcome of the trial:

"Upon these facts a long argument was entered into, on both sides, to the great edification of a number of persons interested in the parochial squabbles, who crowded the court; and when some very long and grave speeches had been made pro and con, the red-faced gentleman in the tortoise-shell spectacles took a review of the case, which occupied half an hour more, and then pronounced upon Sludberry the awful sentence of excommunication for a fortnight, and payment of the costs of the suit. Upon this, Sludberry, who was a little, red-faced, sly-looking, ginger-beer seller, addressed the court, and said, if they’d be good enough to take off the costs, and excommunicate him for the term of his natural life instead, it would be much more convenient to him, for he never went to church at all. To this appeal the gentleman in the spectacles made no other reply than a look of virtuous indignation; and Sludberry and his friends retired."

In the second part of the Sketch, the narrator describes people looking up wills that are filed in another part of Doctors' Commons, and here we find a skilfully drawn precursor of Arthur Gride or Ebenezer Scrooge.

All in all, a very satirical look at the system of law - a topic that Dickens will enlarge on in his masterpiece Bleak House.

Yes, Tristram, I loved the whole Sludberry case. It amused me that on proof of guilt of 'brawling' or 'smiting' in any church or vestry, excommunication would be the result. 'Thomas Sludberry, the party appeared against in that suit, had made use of, and applied to Michael
Bumple, the promoter, the words. 'You be blowed;'and ... the said Thomas Sludberry repeated the aforesaid expression, 'You be blowed;' ...

Apparently, this was even based on a real case ...

We have no illustration in the Doctor's Commons sketch; however we do have this from the London News in 1850: 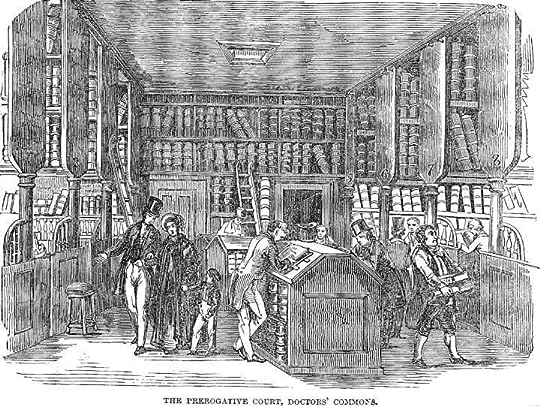 Oh, those wonderfully rich in detail etchings of the Victorian age! Thanks, Kim!

I found this interesting. The first line says:

"Walking without any definite object through St. Paul's Churchyard, a little while ago, we happened to turn down a street entitled 'Paul's-chain,' and keeping straight forward for a few hundred yards, found ourself, as a natural consequence, in Doctors' Commons."

I looked up Paul's-chain since it had those little quotation marks or whatever they are around it and found this:

"Paul's-chain is a street named after the site of a chain across the carriageway of St. Paul's Churchyard to ensure quiet during services."

I've never heard of a street named after a chain before, makes me wonder what other things streets may be named after.

Kim wrote: "I've never heard of a street named after a chain before, makes me wonder what other things streets may be named after. "

Quite often, if you live in a house facing a marketplace, in German your address could be something like "Am Marktplatz 25" or "Am Gänsemarkt 25".

There is also something like "Am Thing", which hints at the place being the site of an ancient place for holding trials.

Streets can be named after city walls, cornerstones, fields and all sorts of other things. I have never given it much thought before now, but I'm afraid I will from now on ...

That's interesting, Kim and Tristram. Just thinking about it, that is a common idea in Ireland. We have a roundabout in our town which is called 'The Swinging Bars Roundabout'. There have been no bars there, swinging or otherwise, for generations.

Also, we have a road called 'Gallows Hill'. A very grizzly reminder of the many executions that took place there in old more brutal times.