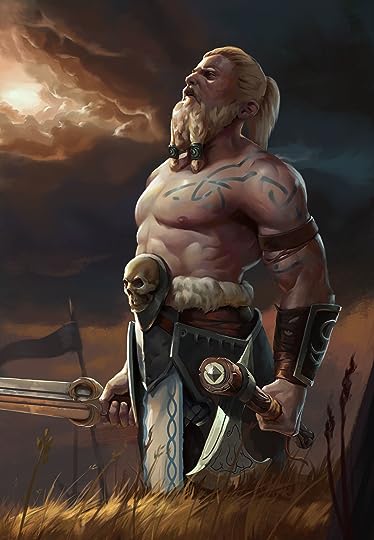 Appearance: Standing nearly 7' tall, Kanarak is the center of attention every time he enters a room. At first glance, his features are difficult to make out through the geometric patterns tattooed on his face, which evoke an intimidating and angry countenance.
His frame does nothing to disabuse onlookers of this imagined persona, as his muscular chest and arms are adorned with yet more tattoos, highlighting lines up and down his body.
It isn't until closer inspection (an pastime which many are uneager to spend too much time doing) that the man behind the muscles appears, with a soft grin and sparkle in his eyes betraying the otherwise imposing figure that he strikes.

Personality: Despite his intimidating exterior, Kanarak is a gentle giant, preferring to take a measured approach to conflict resolution when possible. He tends to be a convivial guest, enjoying merriment and revelry to their full extents. When the situation demands it, his cheerful attitude can be suppressed for a period of time, but before long he returns to his usual self, though perhaps sooner than propriety would demand.

Bio: Kanarak was raised outside of many trappings of "civilized" society, in a nomadic tribe of Goliaths moving throughout the Chainforge Mountains. His upbringing was in line with the traditional practices of his tribe, raised for survival and self-reliance.
As Kanarak reached adulthood he left his tribe for the wider world, pledging to return in five years' time once he had experienced the wider world. Kanarak's journey into Ilara opened his eyes to the opportunities afforded to him outside of his tribe, and at the end of his exodus he did return to his clan as promised, but stayed for only a short time before leaving, again vowing to return in another five years.
In the years since, Kanarak has made a home for himself on the outskirts of the city of Brom, working primarily as a guide and sword-for-hire to parties moving through the less-traveled paths in the region. It was through this work that Kanarak met Zalia, a member of The White Rose, an underground organization that primarily deals in contracts for secretive and unsavory work. Through a series of events not yet defined, Kanarak ended up tangled up in Zalia's work with the White Rose, and the two became companions, traveling together since.

Suddenly, the door of the tavern flew open as Kanarak stepped through amidst a burst of noise from inside, looking over his shoulder as he left the building. "You can pay for mine the next time, brother!" he shouted back into the bar as the door swung closed, and the evening street fell quiet once more.
Kanarak crossed the street to where his partner stood, deliberately ignoring her irritated expression. "Our friend is not in there, and no one would give me any clue about where he went. I could not tell if they did not know, or if they were covering for him. According to the barman, he's run up quite a tab over the recent weeks, but has not visited in some days."
As he finished his report, Kanarak downed the rest of the drink in his mug. "If I were him, would be here all the time. The blueberry mead is delightful."

"Again?" Kanarak thought as he jogged across the street. His partner, while certainly effective with a blade, did not possess the same meticulousness with her words. This would not be the first time she said something that got her in trouble to be sure, and she had not wound up dead yet, but as he followed her inside the bar, all Kana could do was hope that she did not pick the wrong person to interrogate at the point of a dagger.

Despite its rather light-hearted name, the Three Blind Mice was not filled with a friendly sort of clientele. Kanarak was used to such places by necessity. When one spends their days tracking down all manner of criminals, they find that those tracks tend not to lead through fields filled with daisies and happy picnickers. As the door closed behind him, Kana's eyes adjusted to the light, and he saw across the room a flash of jet-black hair. "What are you going to do in here, little thing?" he thought to himself as he pushed past a group of men nearly as large and intimidating as he was.

From out of nowhere, his attention was grabbed by a balding dwarf, who reached out and grabbed hold of Kanarak's arm with both hands.
"Brother! Back so soon to collect on my promise? Surely you can't be ready for another drink already!". The dwarf stared at Kanarak, crossing and uncrossing his eyes in an attempt to focus on the face of the goliath before him.
"Not now, my friend, I... forgot something" said Kana, hurriedly spinning the dwarf back around on his stool to face the bartender before turning back to the room. "Gods damn it, she's gone" he thought as he eyed the doorway in the back of the room.

Kanarak worked his way to the back of the tavern as quickly as he could without overturning a table, pausing for just a moment at the doorway to listen. A heavy thud and a familiar harsh whisper told him that Zalia had found her target.

Stepping through the door, Kanarak saw first the man, looking meek in the corner, perched atop a barrel of something. Just a few paces away Zalia stood, with her arms crossed, as if waiting for an answer. "I would tell her what she wants to hear, friend. Believe it or not, she is the scarier one between the two of us" said Kana as the interrogee jumped at the appearance of this new participant joining their "conversation".
"Listen, I told you already, I haven't seen Wiert in ages. He skipped town." the man whimpered "I swear on gods."
As the man spoke, Kanarak saw the fear in his eyes. This was nothing new of course; the combination of Zalia and himself tended to scare the mooks and hirelings that they ran into on their way to their target. But this was a different fear, he thought. A fear of someone else.

"Friend, we have no quarrel with you. We only seek information. Once we know where we're going, we can take care of Wiert before he even learns that you have spoken to us. You have my word." As he listened to Kanarak's pledge, the man softened a little.
"You swear he won't know?" At Kanarak's nod, the man continued. "He's still in Brom, there's a house in the market district, tucked away behind Pip's Jewelry. He's hiding out there until you all leave town. But you swore, you swore you'd go right there. If he knows I talked..."

"I intend to keep that promise, friend. Stay here the night, be safe, and by morning, you will have nothing more to worry about. Are you ready Zee? We have our mark"