Mod
For twelve thousand years the Galactic Empire has ruled supreme. Now it is dying. But only Hari Seldon, creator of the revolutionary science of psychohistory, can see into the future -- to a dark age of ignorance, barbarism, and warfare that will last thirty thousand years. To preserve knowledge and save mankind, Seldon gathers the best minds in the Empire -- both scientists and scholars -- and brings them to a bleak planet at the edge of the Galaxy to serve as a beacon of hope for a future generations. He calls his sanctuary the Foundation.

But soon the fledgling Foundation finds itself at the mercy of corrupt warlords rising in the wake of the receding Empire. Mankind's last best hope is faced with an agonizing choice: submit to the barbarians and be overrun -- or fight them and be destroyed.

I really enjoyed this series!!
Enjoy!!

Mod
I own a copy of the first book in this series but am unsure if I’ll get to it this month. I seem to be running perpetually behind on some group reads.

I’m joining you for this one, I haven’t read it yet but managed to get the whole series of books so I hope it’s good 🤞

Such a great book. But I really like the second one best. The Mule is my favorite character.
I wonder how many of the people running the world today think they've figured out psychohistory.

Mod
I liked the second one too! It’s such a great trilogy!

Mod
How are you liking it so far Georgina?

I’ve hit a reading rut and am yet to start, sorry. I’m determined to finish the book I’m currently reading, only 20% left and then I’ll start. I’m looking forward to starting it, I will get it finished before the end of the month :)

This trilogy was a surprisingly good read when I read it years ago. I remember reading the second book in a day. A true classic. I'm not ready to re-read it now, but maybe someday. My hesitancy is due to some of my sci-fi re-reads not being that enjoyable to my aged self.

Mod
I enjoyed this one on rereading, Brian. And I'm more aged than you!

I really enjoyed this book and have got the next one in the series already.

Mod
Glad you all liked it! Is anyone finishing the series?

I loved it. I’m onto Second Foundation already. I don’t own any of the later books though, I’ll have to keep my eye out for them.

Mod
Have you read Foundation and Empire,Georgina? It's part of the trilogy.

I recently read The Star Likes Dust and really enjoyed it too.

Yes Rosemarie, I’m speeding through them, they’re great. They’ve cured the reading rut that I’d got into. I actually preferred Foundation and Empire to Foundation. I only started Second Foundation this morning but so far I’m enjoying it too. I’ll definitely be adding more of his to my reading list.

Mod
They get better with each episode of the series. I liked Foundation and Earth a lot too.

Mod
The Mule makes the series even better. I like what he brings to the story.

And I've always been curious what a visi-sonor looks like. I found this from some cover. There's really no description of it in the book so it's pure speculation. 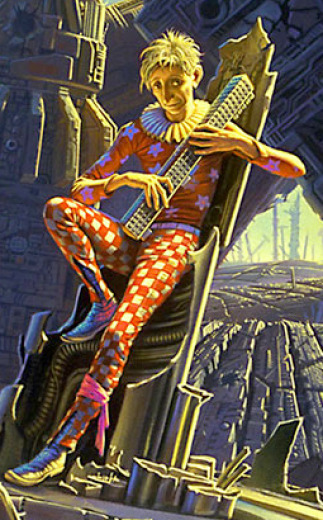 I’ve just finished the third book and WOW! How have I not read these before they are brilliant!
The Mule did make it more exciting Patrick I agree, and that picture of the visisonor is great. It’s funny how you can get a mental picture of something without actually being given a description, that pictures not far off what I had in my mind.

Mod
Glad you enjoyed the trilogy Georgina!! I believe there are more books if you're interested!

There's
Prelude to Foundation
Forward the Foundation
Foundation's Edge
Foundation and Earth
I don't think they really live up to the original trilogy but I'd say they're worth a read.