I don’t really have too much experience with pets, but I love them. First pet I ever had was a goldfish name Princess. (I know, best name ever for a fish.) And it actually lived a long time for a goldfish. Then, nine year old me wanting a pet so bad, I found a toad and it became my new pet. I’m pretty sure I named the toad like 10 different things but whatever. I soon found another toad, and it was great. Except I went to Wisconsin, and when I came back, the roads had died. Buuut, were replaced with a bunch of baby bunnies. So yeah. I’m pretty sure I also had an ant thing? Not sure though. Now I’m going to be getting a beta fish, but don’t worry. I won’t name it Princess.

I currently have five cats named Peach, Daisy, Milky way, Annie and Bruce two parakeets named Ra (like the Egyptian sun god because he is bright yellow) and Leo my Mom has a bunch of fish and we also have Chickens. We used to have a snake but she died at age 26 (My mom got her when she was in college)

We got our dogs so that we would always have dogs. My first two dogs were Rufus and Sparky. Shortly before Rufus died, we got Jingle. Rufus died when he was 13. Then we got Daisy so we had 3 dogs until Sparky died when she was 13. Now we have Jingle and Daisy. Jingle is 7 and Daisy is 5 or 6. I think she’s 5.

I have two Golden Retrievers named Sunny and Bailey. They’ve been my only pets and Bailey’s actually older than me. That’s unless you count the ant farm I had when I was like six where all of the ants died. Anyways, yeah

I actually have an alligator as a pet. Named him Joe.

I have no pets but I really want a hamster

I have one cat and our family will get dalmatian dog this fall!!

I really want a gerbil. Don't ask me why, I just do haha

Oh haha, me too XD

But I would really be happy with any pet

I only have one pet, a raven named Fargo (you can see him in my picture - the dog he is playing tug-o-war with isn't mine). He's my little reading buddy, although he prefers to eat the books. The last book he destroyed was the bible and my mom got so mad. It was not even funny. I guess you could say he likes books as much as me, but in a different way.

Thanks. He's actually a good boy. Makes me feel very literary to read with him. <3

I have 3 pets! I have 2 dogs, Daisy and River. And a cat, Catniss Meowverdeen!

I never had pets...though I would love to keep one. A dog or a cat probably!

I have two dogs! One is a rescue and one is a boxer.

I have a doggo and today is her birthday. She turns three.

I have a Siamese cat named Sophia and she's amazing

She came and curled up on my lap for several hours while I read.

coming up soon then! will you give her a present?

I have a grey cat name Church--after the Pet Semetary Church. Our second cat was originally named Comet but we changed it to Evil because she is full of Hell's wrath.

I have an Airedale terrier called Teddy. She is a violent fiend.

I have two parrots- a sun conure and a budgie

I have two throwback (bigger than most) Pomeranians named Ginger (girl) and Puffy (boy)! :)

I have a boxer mix named Marley! She is just turned 6 years old this month and I have had her since she was 4 months old. I actually found her on Craigslist from a lady in New London, OH. They had her chained up outside with no food, water, or shelter and she was filthy! She had also not been to the vet and never had any vaccines. I took her to the vet immediately and spent nearly $1200 on her within the first month of having her. Thankfully, she did not have any health conditions and aside from having worms which is normal for puppies, she was healthy!

I have a dog named Daisy :) I have had her since 2016. She just turned 4 and we made her a cake (it was a carrot cake with peanut butter). I really want a guinea pig though.

I have a black lab retriever mix his names Jax. We just turned four on January 5th and he is INSANE!! He barks at absolutely nothing walks into walls and sleeps whenever he’s not barking. That’s the only pet I have but I’m at my friends house I feel like their pets are also my pets haha! One of my best friends has two Great Dane Blake and Dex. And my other best friend has a
redbone coonhound mix (I think) named Lexi. One of my other friends has an Australian Shepard mix named Ace and he is the cutest thing. And his brother is a German shirt haired pointer sharply mix and his name is Tundra

I have three dogs.
Their names are Daisy, Sparky, and Jingle.
Jingle and Daisy are French water dogs and Sparky is a wheaten.
Sparky is 13
Jingle is 6 I think.
Daisy is 5.

I love reading about people's pets! I have a Siamese cat named Sophia and she's about 8. We adopted her when she was 5 and she is literally like the fifth sibling around here. I'd like a dog but Sophia wouldn't appreciate that and neither would my parents XD
Sophia loves running through the house at midnight and lets everyone know when she catches one of her toy mice by meowing loudly at us. And she loves her laser toy and tries chewing and eating anything that's plastic (Anyone know how to stop this besides keeping plastic away, that'd be great, but we don't think she'll stop)

This is Sophia, though idk why it isn't as clear as it was before: 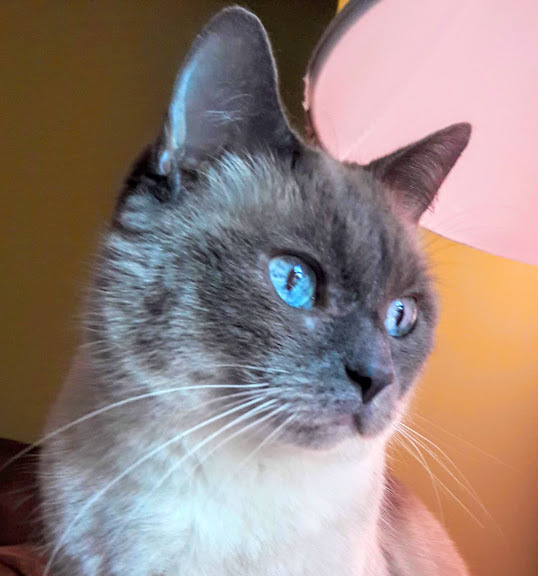 Anna {Follow me for reviews! (✿◡‿◡)} wrote: "This is Sophia, though idk why it isn't as clear as it was before:
"

I have two cats and their my children

I have one cat who hates me. His name is Hobbes (Like Calvin and Hobbes). He is an orange tabby, and he is 16 yrs old

I have a cat named Pepper. He's around six months old and he's adorable I love him.

i have a cat (Snowy) and 2 dogs (Summer and Winter) they are all soo loveable and sweet, at least to me. Snowy can really beat the dogs up though lol!