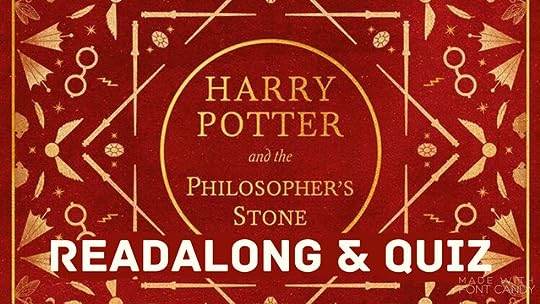 If you're wondering how a Goodquiz works it's pretty simple:
- Everyone reads their copy of Harry Potter and the Sorcerer's Stone at their own pace.
- We can all discuss it below (remember to use spoiler tags for spoilers!)
- On 20th August I'll release the quiz.
- The quiz will include hard and easy questions based on the book.
- No, you don't have to read along with us to do the quiz but it's fun to!

The Quiz:
Coming soon!
Countdown to the quiz:
https://www.timeanddate.com/countdown...

Any questions? Ask below!

Mod
I’m so excited to finally be reading this

special 20 year anniversary Gryffindor edition that my sister bought for me as a gift (even though I’m actually a Ravenclaw)!

What edition are you going to read? And what house are you in?

i'll be reading the illustrated edition! and i'm slytherin🐍

I won’t be rereading just because I read it so recently! But I will definitely do the quiz!

Mod
Ilsen's ahead of the game😂

@Jessica wow illustrated edition! I've never even seen that version to be honest. Is it like abridged or exactly the same but with illustrations like every 10 pages or something?

Kadi wrote: "Ilsen's ahead of the game😂

@Jessica wow illustrated edition! I've never even seen that version to be honest. Is it like abridged or exactly the same but with illustrations like every 10 pages or s..."

From what I have looked at for it, it's the full version but with illustrations. they're more often than every 10 pages because they made the book huge so they could fit a lot of images in while keeping the story!

Mod
jessica wrote: "From what I have looked at for it, it's the full version but with illustrations. they're more often than every 10 pages because they made the book huge so they could fit a lot of images in while keeping the story!"

That's so cool! Are the illustrations good? Or are they weird?

Mod
Dee wrote: "I have a print copy, or I can read with Kindle. But my Kindle is crammed, so I might give it a break, and add the print copy to my book stack!"

I started with my hardcover copy which I've never read before but now I'm going to have to switch to a digital copy because my flight is in less than 24 hours and I'm not taking this hardcover book with me😭 You have to sacrifice the books! I should've started a couple of days back when I'd finished The Lightning Thief then I would've been able to finish reading in this hardcover version🤦🏻‍♀️ I always have bad time management! Too much procrastination😩

Mod
Anyone reading this right now? I'm 4 chapters in so Harry is just about to meet Hagrid and be introduced to the wizarding world!

i gotta find time to read it!

Awwww Hagrid! When the quote is “Harry, you’re a wizard” instead of “You’re a wizard, Harry”. That always trips me up because everyone made a meme of that

Mod
@Jessica no rush we’ve still got half a month left!
@Ilsen wait what!?! I still haven’t read that chapter yet but that’s hilarious😂👏🏻

Oh sorry! I should have used the spoiler tags but it’s not a humongous spoiler. It’s just funny that they change so little things in the movie!

Mod
Oh no it's ok it's not a spoiler! I was just surprised because I've literally never heard about that even though I have read the book before (albeit having read it like 7 or 8 years ago😂)
It's pretty funny to see how they change stuff in the movie. Like I was reading the book the other day and boy Harry is so sassy! Kinda sad we didn't get sassy Harry in the movies too

The funny thing is they made Snape more sassy. We get to see a bit from Harry but he’s mostly broody and I like sassy Harry.

Mod
@Dee😱 you’re so sweet for checking up! I just finished my essays and submitted them so I’m officially freeee!! I’m currently still on chapter 4 so🤭 I haven’t made the quiz yet sorry! I was thinking now that I’m free I can probably finish the book and make the quiz in the next 2 or 3 days. I’ve already got a few questions down in it. I could always flick through the book and make up questions but then I feel like I won’t read the book properly after that and will just dnf it. So is it ok with everyone if I release the quiz in a few days? I’ll send a message out to everyone as soon as it goes live!

that's definitely okay with me! gives me more time to finish it as well😂

i wish we were doing that good in the US. unfortunately my state has one of the highest number of cases bc our governor is a moron

Same. I hate my governor too. He’s an idiot and now I barely leave the house. But my reading has been really good

Mod
Ok so I've come to the conclusion that lately I cannot make myself reread books I've already read and so I'm giving up rereading this book BUT I am making the quiz today and tomorrow so hopefully I can have it ready for you all soon! This month I have been a mess and haven't been on top of anything, I'm sorry guys!
I'll be setting up a poll soon for our next Goodquiz which will be in November, so look out for your invite to that!

Mod
Ooh what did you think of the book Dee? Who was your fave character and your fave part of the book?
Also yesss quiz is dropping on 1st September!

Mod
Ooh what did you think of the book Dee? Who was your fave character and your fave part of the book?
Also yesss quiz is dropping on 1st September!

Mod
The Weasley twins are so much fun yeah! Imagine the book being told entirely from their perspective. Oooh now I really want that!
I don't like Hagrid but I don't hate him either, he's kinda just there. One thing I do love is how Rowling shows Hagrid's accent. You don't see that often except for maybe when there are young child characters that talk with a lisp.

Kadi wrote: "Ok so I've come to the conclusion that lately I cannot make myself reread books I've already read and so I'm giving up rereading this book BUT I am making the quiz today and tomorrow so hopefully I..."

There are so many books out there. Who has time to reread?

Mod
😂what a mood Lynn! Sometimes when I’m on GR I just get overwhelmed with all the amazing books I want to read and that there’s not enough time to read them. I always used to say I hate rereading because I do but when it comes to classic books like Harry Potter or Percy Jackson I though I don’t mind since it’s been a while since I read them but nope that didn’t make a difference and I didn’t enjoy rereading them.

Anyway, the quiz is coming out soon! I’ve almost finished it and I’ll add a link here and send a message out to everyone as well!👏🏻

so i'm currently watching the movie and just thought of something.
so, the sorcerer's stone has obviously been guarded in hogwarts since the beginning of the school year, which means all the different steps and protections in place have been there as well. but the final step in getting the stone is through the mirror of erised, and that's in a random classroom until after harry discovers it at christmas time, and THEN it's moved down there. so…was that always where the stone was, or did it have a different form of protection before the mirror was moved?
and honestly, if the mirror was the final piece of the puzzle, why even put it where everyone "knew" the stone would be hidden? because wouldn't that be a fun surprise to get through all those steps to realize it wasn't even there😂

Damn you’re right! I never noticed that XD Maybe there was no final protection at the end and the Mirror of Erised was an afterthought.

Yah i’ve read it a few times and watched it loads and only just today thought about it 😂😂
and that’s always a possibility! a “hey this would actually be cool let’s do this now instead of having this other probably a lot easier test”

Also, why was the mirror there in the first place? Why did Dumbledore hide the stone in it? My theory: (view spoiler)[I reckon Dumbledore left the mirror in that room at Christmas to let Harry see the mirror on purpose. Just like he asked Hagrid for the 3 headed dog to guard the trapdoor. Dumbledore knew Hagrid was a terrible secret keeper and that the likelihood of him telling Harry about the dog was high because the two often talked and had a close relationship already. Dumbledore also sent Harry the invisibility cloak to allow Harry to sneak around and find the mirror and use it for so much more. Dumbledore essentially enabled Harry to find the stone but more than that I think Dumbledore WANTED Harry to find it. "Why?" you might ask. Well remember how we find out in the last book that all along Dumbledore knew Harry was the 7th Horcrux and that he had to die in order for Voldemort to be completely destroyed? Snape says that Dumbledore raised Harry like a pig to be slaughtered at the right time. Dumbledore knew something was happening at the castle during the 1st book and knew Voldemort would be there in some shape or form and he knew Harry's nature meant he wouldn't leave things be so instead of trying to protect Harry he did the next best thing, he exposed Harry. That taught him so much about Voldemort, about his scar, about so many other things that proved to be helpful for his survival. And you might think it's odd that Dumbledore would leave the castle at the pivotal moment of the ending if he knew that Voldemort was there and something was going to happen. But I reckon he did that on purpose. Because essentially the best way to protect Harry is have him learn to protect himself, he wouldn't have survived for as long as he did if everyone was always trying to fight his battles for him against Voldemort. (hide spoiler)]

That’s a very fair point! He did seem honestly surprised in the book by the fact his call to the ministry wasn’t legit, but it’s dumbledore so who actually knows

Mod
Dumbledore is a total drama queen and a great actor so he could've been faking it when he was surprised. I just skim read the ending of the book and the amount of joy Dumbledore got from vaguely explaining stuff to Harry at the end is really funny😂

That is definitely a good point! Dumbledore is always trying to prepare Harry for the battle. That makes him such a complicated character. I know everyone has read Harry Potter but maybe it will be smart to put spoilers because that theory spoils the whole books XD