This topic is about Xiomara
26 views
Cover Reviews > Designed a new cover... But is it better?

Here is the current cover of my book, Xiomara:

I worked in Canva today to create something new. Figured it would be better to get some feedback rather than spend another two hours tinkering:

Mod
Hi Dakota! Thanks for submitting this cover redo.

1. Very big difference in styles, obviously. Personally, I'm way more interested in the new direction you're taking with the photo-based cover. At first, with the illustration version, I thought it was nonfiction! Then I read the blurb and also checked it on Amazon and saw that it's really a romance.

2. In v2 (bookfunnel), having your shadowed, main character gazing off is very nice, but there's one problem with that: where's the man (or men)? The romance genre really relies on having both parties visible on the cover. At least, traditionally. So you're breaking that rule, but if you want to, go for it.

— I love the title but it's hard to see (I'm shrinking it down to 50% to be like what most people will see as a thumbnail). It needs to pop out of the background more. Either darken the sky or add dark drop shadows/glows to the white letters.

— and there's a little too much dead space above the title; just move the title/subtitle up a bit.

— you're crowding with the reviews; just move them away from the body a little.

— your name could be bigger and maybe better if centerd within the dark body mass vs. centered exactly on the book width.

But I'm liking where you're going with it!

Wow - this is great! Thank you for your comments, I can put them to use right away.

Harald wrote: "Hi Dakota! Thanks for submitting this cover redo.

Harald makes great points here. And I would agree: neither version reads as traditional romance to me. This can be an asset or a hinderance as you market the book.

In the current, illustrated version, you have a very nice balance of warm colors. The typesetting is very good. The illustrations are interesting and engaging, although I'll confess I'm not sure what is happening in the third panel. But overall this is fairly clinical for a romance.

In your version 2, the photograph, the type has a lot of spacing problems—as Harald already mentioned. It is an intriguing photo, and your placement of the near silhouette fairly low on the cover puts her is a position of fragility. But then the blocky sans serif fonts tell a different story, creating an uneasy contrast.

As it is, you have now four type treatments on this cover, and I think you want to pare this down to two, if possible. Consider incorporating something more soft, a light script or at least an italicized serif as you had in the first cover.

But I do like where you are heading with this. Keep us posted.

Your comment about the contrast between the position of the silhouette character and the blocky sans serif fonts is interesting. It reads to me like there's a balance of fragility and strength, which fits with what the MC goes through.

I used Pixlr to change a colour contrast... Not sure what it's called, but here's where I'm at now: https://66.media.tumblr.com/bb4eadfa8....

Ooooo. Very engaging. Contrasting blues and oranges are nice. You have a lot to like in this new update. I'll still say it doesn't read as a romance to me, now more of a novel; but I'm not sure that is a bad thing, since it sounds like you are promoting it as an atypical romance anyhow.

I'd say you have a pretty good cover, and any critiques at this point are nit-picking.

There are three typographic annoyances I'm seeing, things which I think a reader might trip on. They don't break the cover, but it could be a little better if you want to push your design all the way up.

First, the series title line: "Changing the Rules Book One." I like the font choice, but that awkward space is a visual trap. There is no need to push this line so wide (it actually is too wide, anyhow—wider than the title). And the placement is where a subtitle would normally go.

Second visual trap, which Harald mentioned earlier, is the placement of your name. In visual design we try to avoid things that are "just touching" and the upper right corner of the last "T" is very close to the edge of the silhouette. It feels unbalanced. And it is uncomfortably close to the bottom of the cover, crowding the bottom of the page.

You could try shifting it left, slightly off center, to provide a "visual center." You might need to move your silhouette to the left a bit to pull this off, though. Otherwise, you might need to figure out how to move it up above the silhouette, pushing the title and series up a little more.

Third visual trap is the quote. I like the 4 star reference, it is just too close to the silhouette (move it a bit right) and could use a little more space between the stars and text, and the quote and "Kindle review."

I'll try to upload a mock-up to show you what I mean: 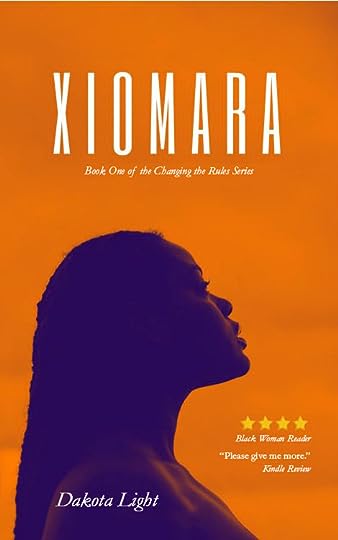 But like I said, I think this is a really strong concept, which we can only make stronger at this point. Well done!

Or perhaps, B.L., proportionately appropriate type means you are confident, and don't need to compensate by "filling the space." With the caveat that the cover needs to read well at thumbnail size if you are planning to sell online, I would say that it all depends on the genre and the mood.

In your books, for example, the large power title really works well—science fiction, targeted at assertive readers with snappy, engaging teasers… it fits the mood and tone of your books really well.

In Dakota's case, however, I think a sense of quiet and serenity better serves the subject. Completely different mood determines a very different cover.

Good point, B.L. Larger photo could help here, and could allow the byline larger. I wondered about that. The danger is giving her too much visual power, and losing this somewhat subdued positioning. It all ties together.