Mod
First there was pinochle. Then, there was faro. Then, whist. Then, rummy. Then euchre. Cribbage. Dominos. Backgammon.

Ohhhh there'll be a hot time in the old town tonight...

I'm trying, I'm trying but already have three wrong guesses and it is driving me to distraction. Laird Cregar, Orson Welles, and Joseph Calleia are not the answers, btw.


Great idea for a new topic.

Mod
I just hope I can keep up with posting new pics. There'll be weeks when I just won't have any attention span leftover from my day-job, to carry out such an enterprise!

It will also be tough to stump youse guise on regular basis. I'll be digging deep for some character actors I reckon.

Mod
Current clues: this is a Warner Bros crime film; considered a classic.

Led by a cast of two famous stars and one newcomer in his first movie role. The above pic is even more unique in that it is the first scene in which the newcomer appears in the film.

So its the first time this guy was ever seen on the silver screen ever; even though he later went on to become an infamous rake, rogue, cad and churl. He really puts the 'eel' in 'heel'!

p.s. no, it isn't Zorro. That's a black felt homburg-style cap casting such a deep shadow over his piercing eyes.

I am giving myself one more day to figure this out or I will be asking my doctor for Valium!!! I have been through everyone I can think of and your clues should have given it to me but didn't. They fit someone like George Sanders but it isn't him. I don't give up easily but when one starts going through the alphabet to come up with a name, it may be time to throw in the towel. I may throw that towel tomorrow and when you tell me, I will jump off the roof for not recognizing him. I have tried everyone from Victor Francen to John Loder but disgarded them, so you know I am getting desperate. :>(

Mod
You will pinch yourself, because this guy is quite famous and every female classics fan surely knows him. He is not obscure by any means.

Mod
In terms of his screen presence, I'd put him in the same league as someone like Steve Cochran for instance. Beautiful at playing untrustworthy louses; rarely ever given any other kind of role; always hovering just on the brink of true stardom.

That's the thing about character actors (as we were all commenting on in another thread). So unlike today; Hollywood just kept using them over and over in the same capacity and everyone was content and yet it still never got tiresome.

Feliks wrote: "You will pinch yourself, because this guy is quite famous and every female classics fan surely knows him. He is not obscure by any means."

I think that is what is making me so mad at myself. I think I am a film buff but yet, can't come up with this actor's name. And I will not cheat by searching for classic films hoping that I see his name in the cast.
I am going to try one more guess which I know isn't right even though he resembles him and fits your description of nasty fellows....... Zachary Scott. If that is wrong, I think I am out of luck.

Mod
You win! You did it! Zachary Scott it is. Huzzah!

The film is 'The Mask of Dimitrios'. '38 or '39. Peter Lorre and Sidney Greenstreet.

What made this more difficult was Scott being cosmetically made up to look older than he was. His character (taken from the source novel by Eric Ambler) is modeled on Basil Zaharoff; a legendary European arms swindler. So, they needed Scott to age for this role.

You are kidding me!!!!!! I had thought about him earlier but discarded that thought. It was my last chance and I thought, well, I might as well go with Scott since he had crossed my mind a couple of times. It really doesn't look a lot like him and the moustache is a little bit fuller than his usual pencil thin one but it is enough to identify him (after several wrong guesses!!!). I did not, however, identify the film which I should have since I have seen it a couple of times.

That was really fun, Feliks. It certainly tests the memory.

Mod
I myself used to think I was good at photo quizzes until I started hanging out on the TCM forums.

That place is a claustrophobic coterie, but there are some serious movie-lore gurus there. You know the kind of people who can tell you what episode of 'Bonanza' young Abe Vigoda appeared in just one time, even though he was only eating stew in the far corner of the shot and had a stetson covering his face.

Mod
p.s. the flick is uncannily similar to 'The Third Man' isnt it

Feliks wrote: "p.s. the flick is uncannily similar to 'The Third Man' isnt it"

I wonder if that is why I guessed Orson Welles. Remember his first appearance in the film standing in the dark doorway with the cat at his feet. It was a great shot and made even better because it was in b/w and the lighting was perfect. And if I remember correctly, he had on a homburg hat.

Film is a hobby with me but it has to be film that pre-dates the late 1850s. And it love film trivia, so Feliks hit the right button when he came up with this topic.

Feliks comes up with some good stuff, this has been more fun than playing trivia pursuit or what ever that game was that was so popular in the 80's.

Jill wrote: "Film is a hobby with me but it has to be film that pre-dates the late 1850s. And it love film trivia, so Feliks hit the right button when he came up with this topic."

Mod
I'm thinking that posting new pics on the masthead of the group page, might get too tiresome a chore for me so be ready for new challenges right here in this talk thread. After all, not every photo I might quiz on, is appropriate for the front page of a Feliks-moderated reader's group. No Shirley Temple memorabilia on our outward-face. "We only want the right kind of people..." ha ha.

Sounds good, Feliks as long as Shirley Temple does not make an appearance!!!!!

Mod
Here's a relatively easy one. You can probably name the actor, but can you name the film?

Jack Oakie but I have no idea which of his many films that is from.

Mod
Correct! I expect it will be hard to stump this group, as I surmised earlier.

Mod
Who can name this player? 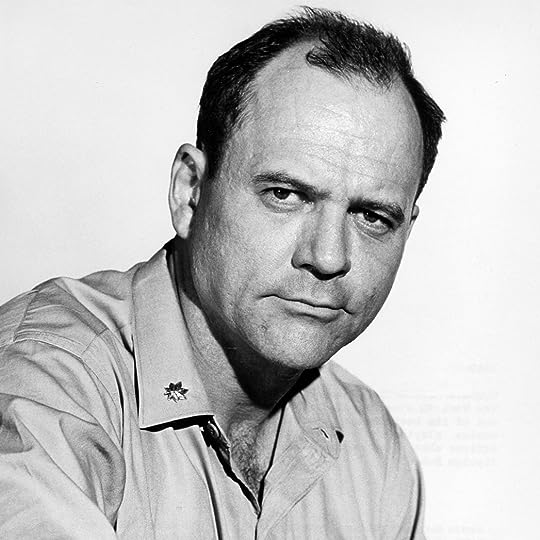 Mod
Correct! Chalk one up for the B-Girl

Mod
and this one? 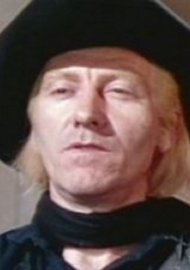 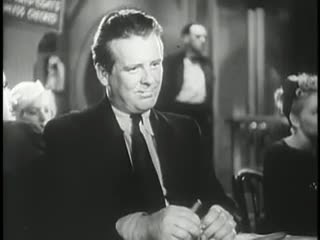 #28 doesn't look like anybody I have ever seen although he bears a resemblance to Max von Sydow, so that is my guess.

Mod
Ha! Nope. This is another case where I am positive you're familiar with the actor in question; so I deliberately chose a photo where he was dressed up and made up to hardly appear like his usual self. You will have to ask for clues, just as before! :p

Mod
I'll reveal that it's an American actor, a studio workhorse like so many others. Active in the 50s and 60s. Character actor; excelled in playing 'average-looking, everyday guys'.

Is #29, James Dunn? I am still working on 28 but I am really stumped. I can't even get close on that one but give me some time to reflect.

Mod
Nope not close yet

Mod
No limit on guesses. I can dispense more clues anytime things get really stalled.

#28 --the gunfighter --is about as made up as Stacy Keach was in 'Life and Times of Judge Roy Bean'. Lengthy, bleached hair and gunslinger garb. This was for a TV western; but you're more used to seeing him with close-cropped suburban-dad hair and appearing in black-n-white features.

Mod
#29 began in vaudeville and appeared in many, many films indeed. You are sure to have seen him in countless titles. In his last film role ever, he was critically acclaimed for a supporting role. It happens to be in one of the fave movies of new group member Kandice who joined up, ten days ago or so. She and I were debating Michael Crichton earlier today (and I was being very bullish). Maybe she can chime in.

I am going way out on a limb with my next guess for #28. Frank Faylen?

Mod
Yes! My goodness, how duzzz she do it! Victory snatched from the jaws of defeat.

Frank played everyday joes and typically was dressed/made up in the same way as a Hugh Beaumont (aka Ward Cleaver). Straight-laced, short-sleeved shirts. But here he plays a villain in the tv series 'Whispering Smith'. It was an Alan Ladd movie originally.

My favorite Faylen role is found in the Kirk Douglas powerhouse, 'Detective Story'.

I think it was his eyes and chin. I put my hand over his hair since I knew that was throwing me off and he popped into my mind.

I must tell you that I do not search the internet for pictures or other clues but use only the picture and comments that you post. This is a challenge, not an open book test. I have a good memory for faces but can't remember what I did yesterday!!!!!

I am kicking myself over #29 since I know who that is but his name just won't surface. I need a little more time on that one. He is kind of a James Dunn/Frank McHugh type.

Mod
Well done. I took it for granted that no one here would cheat to get an answer. If I thought it was a possibility I would take a few extra steps to prevent it (there's ways) but honestly I don't feel anyone would be that desperate. We're all grown adults here. So, I assume the best!

I also took it for granted but just wanted to make myself clear.

Don't ask me how that came to me but I knew so well who he was but just couldn't quite grab the name. It is so funny how things come to you when you are not thinking about them.

Mod
He sure has an interesting bio! And his last role was in 'A Patch of Blue' which Kandice so enjoys. 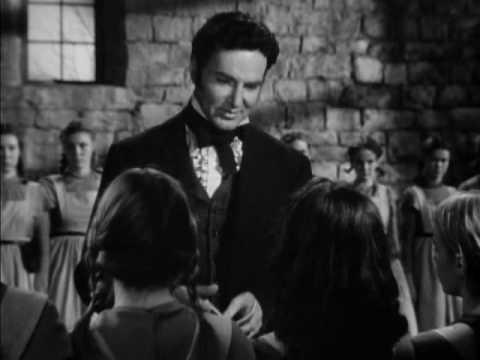 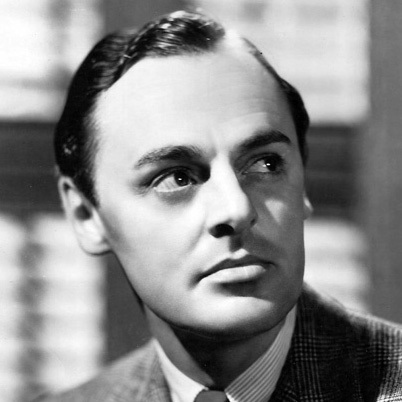 pile it high on the platter

Number 7.....Jerome Cowen
Number 6......not sure about this one but I am going with John Sutton without his usual moustache.

Mod
Groan! Too sharp! Right on both counts. I will have to dig deeper.

It's striking how much John Sutton resembles Errol Flynn eh