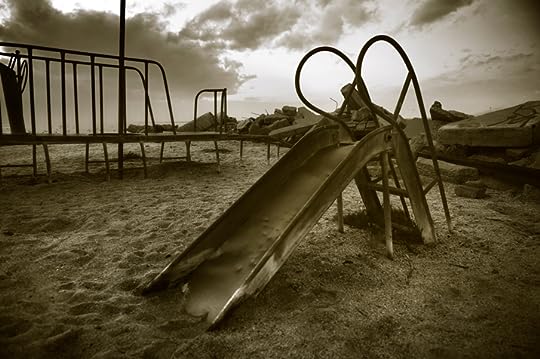 Carter sat on one of the swings at the edge of the playground. There were two other swings, but those were broken and battered, one even detached from its hinge and lying on the ground. The swing set stood at the edge of the old abandoned playground. There was a single slide and a dirty sandbox that looked as if they hadn't been touched in decades. Carter swung his legs back and forth weakly. He stopped, digging the tips of his shoes into the mulch. It was a dark and particularly gloomy day. The sun was hidden behind the clouds, making the air colder than usual. Carter shivered, wishing he'd brought his jacket.

Angel slowly walks threw the park. When she was alive, she used to always come play over here. Her long white hair was the thing that stood out most from afar just from how the sunlight hit it and made it look like a ghost, but if she'd glance over, her gold eyes would also be noticed since they glowed brightly both day and night. She was in the school girl outfit she wore the day she died, considering she never changed out of it except to wash it. As she walks the old gravel under her lightly crunches to give away her quiet appearance.

Carter's head shot up as he heard the sound of light footsteps on the mulch. No, no, no, no, no- This is why he came here in the first place; to avoid people. People didn't like him, and he didn't like people. He only came here because he knew it was abandoned. Someone obviously didn't get the abandoned part of the memo. He scanned the old playground until he spotted a girl. Her hair was an unusual color- completely white. It was slightly unnerving, in a way.

Angel then slowly sits ontop of the slide with her knees to her chest, her gold eyes set out on the sunset. She didn't notice the boy yet it seemed.. Or she did but chose to act like she didn't. The wind softly blew her white hair away from her perfect, innocent and cute face before her gaze finally looked towards Carter. She too was wondering how he knew about this place.. And if he had been here before.

Carter shivered again as he eyed the girl. She had planted herself at the top of the slide and began staring at the horizon. Had she not noticed him? This was his chance to leave before she could. Just as he was about to stand, the girl looked towards him. He blinked in surprise, unintentionally making eye contact with her. The girl had startling gold eyes. He was surprised he could see them from here. He was frozen midway in between standing and sitting.

Angel speaks quietly yet strangely she could clearly be heard as if the wind carried her voice over to him,"Its alright.. Im not that scary.. Am i?" Being a guardian angel, she was still kind, even if she was too quiet and emotionless at times.

Carter stared at the girl. How had he heard her voice? It sounded as if she had spoken quite softly, and yet...Carter had heard her clear as day. Asking if you're scary or not, and then doing something like that left Cart confused. He was stuck in between saying 'Yeah, kind of' or just bolting while he still could. He opted for sitting back down. Because, why not? It's not like he had anything else to lose. Noticing that the girl was still staring at him, he shook his head at her question, despite his earlier thoughts.

Angel lightly blinks, sliding down the slide before standing up and heads over slowly,"You'd be the first.. Yet you seem unsure.. I wouldn't blame you if you thought i was.. We all have our own opinions.."

"I- um..." Carter stuttered nervously. She was getting closer. He clasped his hands tightly together in front of him. Now he really felt like running. Whenever people got to close, he ended up hurting them. He didn't want to hurt even more people than he already had. But if he ran, where would he go? Back home? He scoffed quietly to himself. Yeah, right.

She notices his nervousness and just sits in front of him, sighing,"You still seem scared.. Whats wrong?"

Carter's eyes widened as he watched the girl come closer. "Um-..." He stuttered at the white haired girl's question. "Nothing." Did he look scared? Carter hoped he wasn't as transparent as the girl made him seem. He studied the girl tentatively, then quickly looked away.