Race: Imperial
Abilities/Powers: Can turn invisible once a day using the power of the Crescent Moon. 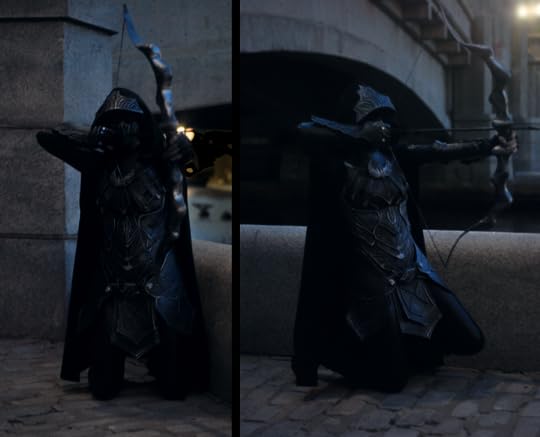 Description: Eric only wears his armor when doing jobs for either the Guild or Nocturnal. Otherwise he wears his normal smithing clothes.

Personality: Eric is a rather kind and passionate man. He will fight and die willingly for his friends at any time. Eric is also bipolar, so at a moments notice he can become a ruthless killer. Eventually he will snap out of it, but there is no telling what he will do.
Likes and Strengths: He enjoys the simple things in life, but does long for something bigger than himself. He places his personal honor above all else, even his morals. He uses the Iaido style of fighting. (A style which involves drawing and sheating rapidly.)
Dislikes and Weaknesses: He dislikes dishonorable people and drinking. His Bipolar, so he can do things he would never do normally with no recollection afterwards.

History: Eric Draven was born in the Imperial city to a whore and a sailor. His mother attempted to drown him on the docks, but he was saved by a ship's crew. He grew up there, working his way up the ranks on the ship. When he stopped at the docks he would fight to earn money, as well as stealing. This got him notice by the guild on a stop at Riften. There he excelled, surpassing most adults at the age of 19. Six years later he became a Nightingale. He became infamously known.
Place of Birth: Imperial City, Cyrodil
Relationships: None.