Mod
This topic is open for discussion about Prince of Thorns by Mark Lawrence. 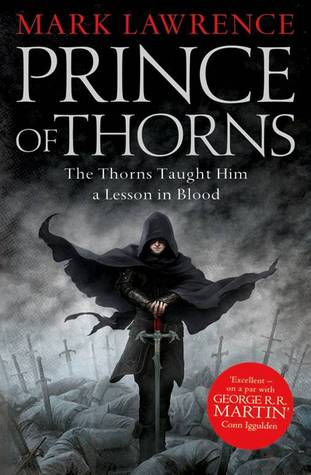 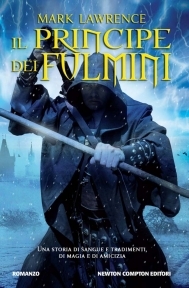 Book Synopsis:
When he was nine, he watched as his mother and brother were killed before him. At thirteen, he led a band of bloodthirsty thugs. By fifteen, he intends to be king.

It's time for Prince Honorous Jorg Ancrath to return to the castle he turned his back on, to take what's rightfully his. Since the day he hung pinned on the thorns of a briar patch and watched Count Renar's men slaughter his mother and young brother, Jorg has been driven to vent his rage.

Life and death are no more than a game to him and he has nothing left to lose. But treachery awaits him in his father's castle. Treachery and dark magic. No matter how fierce his will, can one young man conquer enemies with power beyond his imagining?

I'd love to read thus one but it'd have to be later this month so I will see when you all set the start date.

I'll try to squeeze this one in.
I fell in love with Mark Lawrence's writing after reading Prince of Fools.

If I can get this from the library by the time you guys start this, I may join you.

This book sounds great. I'm in, too.

Ready to start whenever, Vi. My copy arrived today, so it will depend on when you can get yours? Next week?

I've read this one, but if you move into the second book, I'll join then.

Anytime next week will work for me. I have the book on hand - just need to finish the ones I've started for other challenges. Would next week work for everyone?

Rebecca NJ wrote: "If I can get this from the library by the time you guys start this, I may join you."

Sure, why not?!? This has been a year of branching out for me so we'll see how this goes :)

I should have it soon but you don't have to wait for me.

Next week is better for me too!

Next week will do!

Just a confirmation - will 13/14 November work for everyone?

Sounds good to me. I've updated the start date.

This one has been sitting on my shelf forever! Count me in :)

I was undecided on this book and then read the first couple of pages and decided to go with it so I'm going to be joining you now :)

I agree NancyHelen. But I'm only 4 pages in! Hopefully he has some redeeming qualities about him.

I'm starting Chapter 11. All I can say is Whew...I thought Locke Lamora was an anti-hero but Jorg takes it up a notch.

(view spoiler)[ I'm starting Chapter 10. Jorg seems to have a lot of hate and rage in him. I get that he saw his mother and brother killed but he seems to take that revenge a bit too far especially for only being 14. When I'm reading it seems hard to think of him as a 14 year old or picture him as the young boy on the cover. He just seems to be so much older than that to me probably because he is so mean and cruel. I also find it strange that a 14 year old can get all these people to follow him. They just blindly follow him for the chance of possible gold and beer? I think they may just be scared of him but not necessarily loyal to him. Except for Captain Makin. He seems to be loyal to the Prince. (hide spoiler)]

Hopefully my copy from the library comes in soon!!

I'm at chapter 8 or so. I have to wait and see about the MC. I agree with Kristin. (view spoiler)[I'm asking the same questions as you. I'm wondering if there are more back stories to come. (hide spoiler)]

Cynthia wrote: "I'm starting Chapter 11. All I can say is Whew...I thought Locke Lamora was an anti-hero but Jorg takes it up a notch.

LOL! Locke Lamora seems tame to Jorg. Except for (view spoiler)[the torturing of the Falconer (hide spoiler)] he seemed like a mischievous boy, you know?

Vi wrote: "Cynthia wrote: "I'm starting Chapter 11. All I can say is Whew...I thought Locke Lamora was an anti-hero but Jorg takes it up a notch.

Just started chapter 4. And Locke Lamora is a cute kitten next to Jorg

Lol! Absolutely. Has anybody read

? Apparently, this book is supposed to be a wannabe of that one. Both are dark fantasy.

Can't say I have... This is actually my first try at dark fantasy.
Have you? Is it any good?

I just got notice that this came in at the library - I'm going to try to pick it up today. Although I should really try to finish Locke Lamora first!

? Apparently, this book is supposed to be a wannabe of that one. Both are dark fantasy."

I have that on my to-read-maybe list. I don't think I've ever read any dark fantasy. I like this one so far but Jorg just seems like a really messed up kid.

? Apparently, this book is supposed to be a wannabe of that one. Both are dark fantasy."

. The only similarities I see are superficial genre ones, characteristics of dark fantasy.

earlier this year (so if anyone's copying, he is) and it sounds like it has some similarities. From the description: “I swore an oath to be avenged on the killers of my father. I may be half a man, but I swore a whole oath” and "Gathering a strange fellowship of the outcast and the lost, he finds they can do more to help him become the man he needs to be than any court of nobles could."

Okay, now about the book! Spoilers abound!
Thru Chapter 25 (view spoiler)[
WOWZA! I'm not sure where it's going, but I am sooo shocked at some little bits in pieces slipped in here and there. The totality of them is less than 10 lines, but such implications!

From Chapter 23 - It blew my mind when Jorg mentioned 'plasteek' and tried to make sense of 'mutagen' and 'neurotoxicology'. I saw no previous hints that this is a future world, but certainly it must be! I still needed to be hit over the head, and he did it again in Chapter 25 with Nietzsche. (hide spoiler)]

Chapter 28 (view spoiler)[
A railroad!!! There's an old set of tracks! We must be in the future. I wonder what 'Day of a Thousand Suns' means? Nuclear war? I can't imagine it's something natural, as there seems to be too much inhabitable world left.

I hope we get more answers to that, although I don't need that mystery to keep me reading! (hide spoiler)]

Angel wrote: "Can't say I have... This is actually my first try at dark fantasy.
Have you? Is it any good?"

which I actually liked despite the violence. It's definitely dark but not as much as this. I've also read the Night Angel trilogy by Brent weeks (Starts with

) which features an assassin hero. That was my first dark fantasy. I haven't read much more.

I'm only 10% in and I have to say, Jorg is nearing towards a villain than a anti-hero. He is really distasteful (to be polite). So much so that I've considered DNF-ing. (view spoiler)[He's also a rapist. And a sexist rapist at that (hide spoiler)]. I'll check back in when I read more.

, but it's also about half the length.

It's an interesting world, but I don't have a good feel for it. Maybe it would be better to say I don't feel like I have the whole picture. It's an incomplete vision in my mind.

After spending 2 hours waddling through

and it's excesses, brevity was definitely a plus in my mind and may have caused me to overrate.

Vi wrote: "I'm only 10% in and I have to say, Jorg is nearing towards a villain than a anti-hero. He is really distasteful (to be polite). So much so that I've considered DNF-ing..."

I am inclined to agree with you, Vi. I have read a little bit further, and there are at least some explanations for why Jorg is the way he is, but I don't think it quite justifies it, IMO. He's pretty unpleasant, and I am hoping that he starts doing something to redeem himself.

It is interesting also how the author has combined a fantasy world with a real one. Jorg reads Plutarch, for instance, and yet the world he is existing in is definitely not ours.

I'm just starting this one now. Looking forward to it! I love anti-heroes.

Ok, a few chapters in and I already miss Jalan from Prince of Fools. He's manipulative, sarcastic, and cowardly, but he does have some morals. Buried very deep down. I absolutely loved him.
Jorg is a little harder to like so far. I like anti-heroes, but not when they're (view spoiler)[rapists (hide spoiler)].

I will start this one tomorrow. :)

I like reading the backstory of Jorg. Like NancyHelen says, it gives quite an explanation but does not justify it. But I'm definitely intrigued by his motives.

NancyHelen - It's true about the world. His tutor for example sounds like chinese to me? The author is probably using the same geography, time etc but the kingdom looks to be fictional.

You're absolutely right. It's do strange to think that he's only 14. (view spoiler)[and he started to torture people at 10. I just finished chapter 10 and the story with the bishop and the nails creeps me out (hide spoiler)] *shivers*

It's true about the world. His tutor for example sounds like chinese to me? The author is probably using the same geography, time etc but the kingdom looks to be fictional. ..."

I hadn't caught that about his tutor, but you could be right. The combination of real and fantasy means I do have to think quite hard. So, did Plutarch come from Greece? Does Greece exist? Or am I over thinking it now?! :-)

I'm up to Chapter 26 now. I actually really like this book and I don't think Jorg is as bad of a person as we think. At least I'm hoping there's even more to his story that we were made to believe. (view spoiler)[ In chapter 25 it seems Sageous is saying that he has lost his will. That someone has manipulated Jorge to do this things and that makes me like Jorg and feel sorry for him in a way. And I like Karherine. I think she makes him think about things already so I hope she sticks around in a good way. (hide spoiler)]