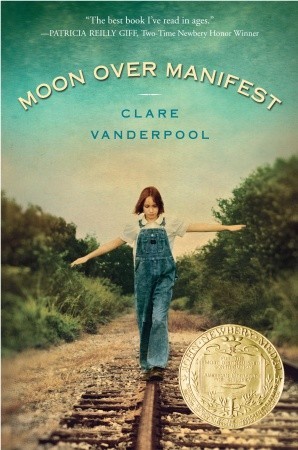 This is an "Informal Buddy Read"
An “Informal Buddy Read” doesn’t have a discussion leader and participants are asked to consider some generic questions when making comments about the book. An example is here.

Book synopsis
The movement of the train rocked me like a lullaby. I closed my eyes to the dusty countryside and imagined the sign I’d seen only in Gideon’s stories: Manifest—A Town with a rich past and a bright future.

Abilene Tucker feels abandoned. Her father has put her on a train, sending her off to live with an old friend for the summer while he works a railroad job. Armed only with a few possessions and her list of universals, Abilene jumps off the train in Manifest, Kansas, aiming to learn about the boy her father once was.
Having heard stories about Manifest, Abilene is disappointed to find that it’s just a dried-up, worn-out old town. But her disappointment quickly turns to excitement when she discovers a hidden cigar box full of mementos, including some old letters that mention a spy known as the Rattler. These mysterious letters send Abilene and her new friends, Lettie and Ruthanne, on an honest-to-goodness spy hunt, even though they are warned to “Leave Well Enough Alone.”
Abilene throws all caution aside when she heads down the mysterious Path to Perdition to pay a debt to the reclusive Miss Sadie, a diviner who only tells stories from the past. It seems that Manifest’s history is full of colorful and shadowy characters—and long-held secrets. The more Abilene hears, the more determined she is to learn just what role her father played in that history. And as Manifest’s secrets are laid bare one by one, Abilene begins to weave her own story into the fabric of the town.

Powerful in its simplicity and rich in historical detail, Clare Vanderpool’s debut is a gripping story of loss and redemption.

I'm finishing up The Interestings then will start Moon Over Manifest. Probably tonight. Tomorrow at the latest.

Looking forward to our Buddy Read!

I'm about half way through the book now. I'm listening to it as an audiobook - which is read by a full cast but mostly by Jenna Lamia - who is an amazing narrator. She read Skeeter's part of The Help which is the only off-putting part of the book so far since there's an Abilene in this one too. But that's not a big deal.

I'm enjoying the thread of magic in this story with Miss Sadie's "recollections" and I can't wait to find out all the secrets. I get the sense that Gideon (view spoiler)[ is dead. I'm not sure if that's really a spoiler as I believe the author wants us to think he is. (hide spoiler)]

The old advertisements are so interesting.

I had no idea this book would be a mystery.

Marla - have you started?

Just got it from the library. I will probably start it tonight. Sorry, I've got 3 other books going at the same time...so I may be jumping in and out.

I've got about 2 hours left of the audiobook.

This story is very sweet. I've not read a story before with such a short distance between the past and present. An interesting approach.

I'll admit I'm a bit tired of the talk of elixir... Hopefully the author will move on from it soon.

(view spoiler)[ I'm putting this in a spoiler because I don't want to sway anyone's impressions. This book was sweet. But that's kind of it. The reviews were so good and it won such a prestigious award, I had REALLY high hopes - but I'm feeling rather disappointed. The mystery wasn't very mysterious. I didn't care much about any of the characters and I did not feel compelled to find out what had really happened. Meh. (hide spoiler)]

Sorry, I am just starting. She just arrived in town and is going off for the last day of school. I'm torn whether it makes sense to send her for one day. It's a good way to meet the kids in town, but...it's just one day. Can you really make friends in one day?

I like (view spoiler)[ the Universals and the spy map. This is such a sweet story. (hide spoiler)]

What do you think happened to Gideon?

I'm a third of the way in, (view spoiler)[and I think Jinx is Gideon. I have a feeling Ned didn't come back from the war. :(

I still think it's mean that Abilene has a assignment for the summer. Seeing the sister without her veil is HUGE! My husband still talks about the time the sister was playing kickball with them in 1st or 2nd grade and her veil came off and she ran into school crying.

I like Abilene's interactions with Miss Sadie, but really would you keep a child's prized compass? I guess she should work off the pot she broke...sounds like Abilene has a bit of a Jinx on her. (hide spoiler)]

I don't want to ruin anything for you so I have to be cautious about what I say - but there's definitely a reason to explain your queries.

Thanks for sharing your insight into the veil. It was portrayed as if it was a big deal in the book - but I did question the practicality of being so robed up while performing such an arduous task.

Abilene is an excellent character. I picture her portrayed by a freckle-faced girl I grew up with - she was the youngest of 5 brothers and fierce as a result. But she was honest and loyal too. An Abilene for sure.

I love how Jinx has such a good heart but has his own set of morals and enough mischief to give Tom Sawyer a run for his money. Abilene sure has had a different education and life.

I finished. It was such a great story! Some of the mysteries were so obvious and others were cleverly obscure. (view spoiler)[I knew right away that Ned wasn't coming home and Gideon was Jinx. But the Rattler's identity, the grave in the woods, Miss Sadie's secret and the mining solution were wonderful surprises. I wish we had learned about Abilene's mother too, but maybe that's a story for another book. (hide spoiler)]