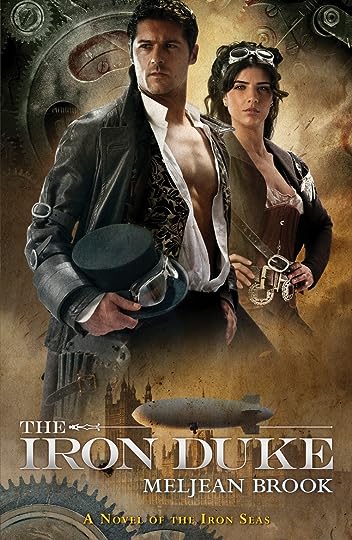 First in an all-new series where seductive danger and steampunk adventure abound in the gritty world of the Iron Seas.

After the Iron Duke freed England from Horde control, he instantly became a national hero. Now Rhys Trahaearn has built a merchant empire on the power-and fear-of his name. And when a dead body is dropped from an airship onto his doorstep, bringing Detective Inspector Mina Wentworth into his dangerous world, he intends to make her his next possession.

But when Mina uncovers the victim's identity, she stumbles upon a conspiracy that threatens the lives of everyone in England. To save them, Mina and Rhys must race across zombie-infested wastelands and treacherous oceans-and Mina discovers the danger is not only to her countrymen, as she finds herself tempted to give up everything to the Iron Duke.

I like the new cover....I was reading something the other day (can't for the life of me remember now what it was) but it made me think of this book...I feel a re-read coming on...

Lol I know the feeling. I had to dig around in my paperbacks to find my copy of Iron Duke! Re-read is so on ^_^

I need to find mine as well and the sequel I bought but never got to. I really do like that cover.

Much prefer the new cover. Never did like the old one, which I've got somewhere.

I have never read this one so I am super excited!

And I think this is the EU cover or the audio one..not a fan of the other one so I mixed it up a bit

Well, just finished and I liked as much as I did the first time I listened to it. Anyone else start it yet?

I'm a couple hours into the audiobook and really enjoying it. It just hits so many of sweet spots: alt-history, homicide investigation, cop/criminal romance, pirates, nanobots, zombies. It's delightful.

Nichole ~Bookaholic~ wrote: "Well, just finished and I liked as much as I did the first time I listened to it. Anyone else start it yet?"

Not yet
Plan to sometime this week though.

I loved it and read the sequels as fast as I could get my hands on them. I liked both covers for this one, so that wasn't an issue but i definitely agree that the cover art is a significant turn off if it is bad or not related to the content.

I also think the new cover is much better than the original. I loved Rhys & Mina as a couple - I recommend reading the short story that features the couple. The book has a mishmash of different elements - alternate history, steampunk, zombies, pirates, invasions, etc, but the author combines them in a way that it never becomes confusing.

Sara wrote: "I recommend reading the short story that features the couple."

I firmly agree. Other authors have tried to write short stories to complement a series, but it comes off too regurgetated. Atleast this one gave a little more and presented a few little trinkets in their life post wedding bliss.

FYI, Meljean Brook has a nice guide to the world of the Iron Seas. Here's the link: http://meljeanbrook.com/books/the-iro...

Also, for those new to the Iron Seas, the anthology Burning Up contains a prequel story, Here There Be Monsters?, to this book.

Here are some informational quotes I pulled from the book:

"Two hundred years ago, when most of Europe was fleeing from the Horde's War machines, some of the English had gone with them. But an ocean passage over the Atlantic hadn't come cheaply, and although the families who'd abandoned England for the New World hadn't all been aristocrats, they'd almost all been moneyed. After the Iron Duke had freed England from Horde control, many of them had returned to London, flaunting their titles and their gold." Pages 1-2

"Two hundred years ago, the Horde had hidden their nanoagents in tea and sugar like invisible bugs, and and traded it on the heap, The Horde had no navy, and even though Europe had fled before the Horde, Britain was protected by water and a strong fleet of ships. And so for years, they'd traded tea and sugar, and England had thought itself safe.

Until the Horde had activated the bugs." Page 3

Not sure if they were activated by frequencies like the Frenzy had or something else.

"Enhanced had become the polite term for living with millions of Microscopic machines in each of their bodies. Bugger had been an insult once-and still was in Manhattan City. Only the bounders seemed to care about that, however. Not a single bugger that Mina knew took offense at the name." Page 16

"The road had once been named after London's darga-but nine years ago, as revolutionaries marched along this route, the road signs bearing the Horde governor's name had been destroyed." pages 13-14

I'm thinking darga is a generic name for governor as opposed to a person's actual name as it's not capitalized.

Ok so I am about half way through the book and I am really enjoying it. The romance angle surprised me for some reason I did not think it had that element.

At any rate I have a question about Mina. (view spoiler)[
Ok so the horde created a sexual frenzy and I assume Mina's mom gets raped by some member of the Horde. Normally when people have babies from the horde they go to orphanages.
But for whatever reason Mina's parents want to keep her (Mina) despite the fact that she looks Asian (I think the Horde was someplace from Asia but I am not sure about that either).
I assume this is why she is kind of famous because people recognize her as this oddity. But what seems odd or maybe what I missed is what happened to the other kids in the orphanage?

Or is it anyone who looks like the Horde are hated and this is not so much an isolated thing but because the book is focused on Mina it just seems this way..so it is like a method of illustrating how hard Mina's life is?

I finished it last week. I liked it and plan on continuing the series.

I think most of the other orphans either were taken when the Horde evacuated or killed in riots.