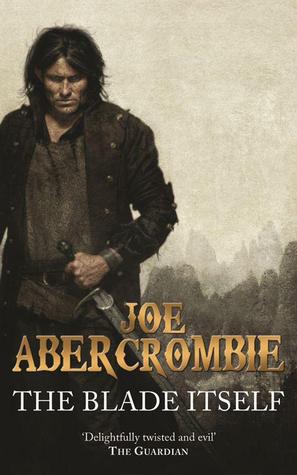 Book Synopsis:
Logen Ninefingers, infamous barbarian, has finally run out of luck. Caught in one feud too many, he’s on the verge of becoming a dead barbarian – leaving nothing behind him but bad songs, dead friends, and a lot of happy enemies.

Nobleman Captain Jezal dan Luthar, dashing officer, and paragon of selfishness, has nothing more dangerous in mind than fleecing his friends at cards and dreaming of glory in the fencing circle. But war is brewing, and on the battlefields of the frozen North they fight by altogether bloodier rules.

Inquisitor Glokta, cripple turned torturer, would like nothing better than to see Jezal come home in a box. But then Glokta hates everyone: cutting treason out of the Union one confession at a time leaves little room for friendship. His latest trail of corpses may lead him right to the rotten heart of government, if he can stay alive long enough to follow it.

Enter the wizard, Bayaz. A bald old man with a terrible temper and a pathetic assistant, he could be the First of the Magi, he could be a spectacular fraud, but whatever he is, he's about to make the lives of Logen, Jezal, and Glotka a whole lot more difficult.

Murderous conspiracies rise to the surface, old scores are ready to be settled, and the line between hero and villain is sharp enough to draw blood.

Excited to read this again!!

I'm excited to read it for the first time! :) I started to read The Heroes but when I realized it had some characters from this trilogy I decided to wait and read this first...and then that never happened.

Looking forward to this one

Yeah Logan you can read The Heroes without reading the trilogy but I think it's best to start with the trilogy.

New author for me. Very excited about it.

You people are truly killing me! I have had this book in my to-read list since ages! Sigh... I am sorely tempted!

Oh, this looks good. I'm thinking this would be a good one to join. :) My goodness so many wonderful books.

This is one of my favorite series. I might reread it along with you all and then move on to Abercrombie's other books. I have Best Served Cold on my bookshelf but I've yet to touch it.

Jumping into this one. it's been on my TBR so I might as well! :)

Amanda wrote: "This is one of my favorite series. I might reread it along with you all and then move on to Abercrombie's other books. I have Best Served Cold on my bookshelf but I've yet to touch..."

I thought Best Served Cold was great but The Heroes and Red Country were even better, Amanda!!

Since this one is in December, count me in!

This Buddy Read thread is killing me...

I have read Best Served Cold& Half a King, both super good! This one is on my TRB as well, I picked it up a few months ago when the price got droped.

Greta wrote: "Amanda wrote: "This is one of my favorite series. I might reread it along with you all and then move on to Abercrombie's other books. I have Best Served Cold on my bookshelf but I'..."

That's good to hear, Greta. I'm looking forward to his other books, especially The Heroes.

It has been awhile since I've read an Abercrombie book. Sounds like a good time to pick another one up!

I loved this one but I haven't moved on to the second. If you're doing the trilogy, then I'll join for the second.

I just picked this up for a mere $4 the other day. This is just the right push to read it ASAP.

Hopefully this will turn into a Series Read, and when can go at our own pace. I'd like to read them, but I can't go zooming through all 3 one right after the other.

Oooh, I just realised that I have this on my kindle so count me in!
I'm excited after reading all of the references to it being similar to the Song of Ice and Fire series.

Anyone has started? I will start late. In a few days. I overestimated my reading time. ... I am behind.

Esther wrote: "Anyone has started? I will start late. In a few days. I overestimated my reading time. ... I am behind."

No, will be a few days

I'm interested in this also, I probably won't start for a few days, a little behind in some other reads.

I'd like to join this too, will start today or tomorrow.

I'm behind on BRs as well, so I'm fine with starting late.

I started this on time, but I didn't get anything read last night so most likely I'm behind lol. got through the prologue and (I think?) chapter one. Abercrombie sounds like a British Kerouac -- he loves his fragments and run-on sentences lol.

I've started but am only around 4% in so not far enough to really have much of an opinion yet.
I am looking forward to getting further into it soon though.

Read the first chapter this morning. not much to say yet.

I still plan on it...Just got a few books to work through still before I can start...

I'm 11% in and like it although I find the writing style a little odd sometimes. Keen to find out about Logen's past, he seems to have an interesting history.

I will be late to start too...maybe a week?

Through chapter 2, and I saw we get to get back with Logen in the next chapter so I'm excited for that. Glokta's chapter was definitely different.

I'm still looking for a copy of this one....

Ange wrote: "I'm 11% in and like it although I find the writing style a little odd sometimes. Keen to find out about Logen's past, he seems to have an interesting history."

i only have a few chapter in and i do wonder at the writing style. I think it is to take a bit to get used to.

26% (view spoiler)[ anyone else find it strange the king was summoned to the council meeting but was not told why. If the king rarely attended and was told to do so surely he would demand to know why. Also how do their enemies get in with a knife in a box claiming it a gift for the king. Pretty lax security! (hide spoiler)]

Only at 9%. Now i have met all 3 main characters. Quite a bunch.

So far it is not catching my interest so much but I am quite far enough.

Ange - (view spoiler)[I agree. I was pretty surprised when no-one bothered to check their 'gift' before it was presented to the King (hide spoiler)]

I'm just over 28% through now and am actually quite enjoying it. I'm interested to see how all of the main characters intersect further along in the story.

I am now starting to see the links between the main characters. I am getting into the story and liking it.

I hope Ardee will be a recurring character. :)

Who else loves Glokta

I'm about 10% in and am definitely staying interested in the story. I'm also liking the writing style :)

Since it early story for me, I'm not loving Glokta yet ;) He scares me!

Ange wrote: "Who else loves Glokta"

He's equal parts disgusting and fascinating to me right now.
I'm a huge Logen fan and can't wait to see what happens with his character.
I'm just over 50% now and Bayaz is definitely one of my favourite characters too so far.

What I loved about this book is that with the exception on bayaz all the main characters are flawed or damaged in some way, there are no typical knight in shining armour heroes here

Ange wrote: "Who else loves Glokta"

I am about 25% in. I want to know more about Logan part in this right now. (view spoiler)[ i mean i see a relationship-or lack thereof- between Glokta and Jezal. I see war at their doorstep but i still not sure where Logan and the Magi will fit in the story. friend or foe or something else altogether (hide spoiler)]

I'm just over 28% through now and am actually quite enjoying it. I'm interested to see how all of the main characters intersect furt..."

About your spoiler. It never occurred to me but you are so right.

Finished the chapter : King of the Northmen
(view spoiler)[Well, after the meeting between Bethod and Bayaz, it seems to be everyone against the Northmen.

I wonder if the Magi will stay neutral or join the Union in the fight, if fight there is....

I wonder about the Magi. How powerful are they exactly?
(hide spoiler)]

I am starting to really like Bayaz. Reminds me of Gandalf. :)

I'm around 92% into this now and am so close to tasting the end!
I've had a lot of mixed feelings for this book over the past few days as I am generally really enjoying it but I have found that there is a lot of filler that could have probably been left out to develop the story a lot quicker. It's felt like a very long and slow journey so far but maybe that was the author's intention when writing it.
I'm going to finish reading it today if it kills me!

i was struggling with this one. Other books I was reading got picked up more often. The story did not seem to get anywhere
I finally finished part 1. Since then I seem to be getting ito it. Hopefully it will last.

I am still not liking Glokta but Logen and Jezal are starting to grow on me..