198 views
Chit Chat & All That > Your most prized book (not favorite story), but the physical ink and paper book, and why? Could be rare, family heirloom, autographed, great cover art, etc.

Mine is a first American edition, The Silmarillion 1977 by J.R.R. Tolkien. I began reading Tolkien in 1971, 5th grade and couldn't get enough. I pre-ordered The Silmarillion from an actual brick and mortar bookstore, waited months, and was the first of my circle of Tolkien fan friends to get it.

My friend is a huge Tolkien fan. Have you read Kalevala and Kullervo's story? Those who know about these things say Tolkien borrowed it for Túrin Turambar.

I don't really have one... I did get old Gone with the Wind books from my godmother as a present. Probably they are from the first Finnish edition, I think the year was 1938, and they also have her father's exlibris. He was actually quite famous artist from a very famous family, so the exlibrises are also special. I guess my father got the memoirs of Mannerheim from her, too, because they had the same exlibris.

I also have a big old Bible with leather covers, given to my grandparents when they were married in the 1920s by my grandmother's parents. It says in the description that to their children and grandchildren and I am the only one alive anymore.

Then we have one classic, set in the village I was born, with (newer) drawings. Ours is the numbered edition, I guess there are only 1000 of them?

Then we have a nice edition of the mentioned Kalevala, with leather covers I believe it was... I don't have it here.

And I also have The Quest for Kalevala http://en.wikipedia.org/wiki/The_Ques..., autographed by Don Rosa.

So I guess you got five for the price of one. :-P

Mod
Joseph wrote: "Mine is a first American edition, The Silmarillion 1977 by J.R.R. Tolkien. I began reading Tolkien in 1971, 5th grade and couldn't get enough. I pre-ordered The Silmarillion from an actual brick an..."

Hey, I have one of those too. I guess it is considered vintage now, of course I suppose I am vintage too.

Mod
As for your question, I have a small school book on how to sketch that was my mother's when she was in grade school, so from about 1929. It has her little drawings in it and a few of mine & my sister's.

my complete collection of Jane Austen Novels, which my brother bought me in Birmingham

Tytti wrote: "My friend is a huge Tolkien fan. Have you read Kalevala and Kullervo's story? Those who know about these things say Tolkien borrowed it for Túrin Turambar.

Sounds like you have some real treasures. I have heard of the Kalevalla. It wouldn't surprise me at all of Tolkien borrowed from it. I know he was inspired by Nordic mythology, so why not Finnish as well?

Kathy wrote: "As for your question, I have a small school book on how to sketch that was my mother's when she was in grade school, so from about 1929. It has her little drawings in it and a few of mine & my sist..."

Julie wrote: "my complete collection of Jane Austen Novels, which my brother bought me in Birmingham"

Very nice...early editions? Birmingham as in U.K.? I leave on the East Coast USA, so we have some bookstores with OLD books, but not old by European standards. I've had my eyes on a Dickens set for a while, dropping hints, etc. Maybe someone will get it for me for Christmas.

I have another I'll add. I have an autographed copy of Real Ponies Dont Go Oink by Patrick McManus. You've never heard of him. He's an outdoorsman humorist. If you've got an literary outdoorsman in your life...he makes a great and unexpected gift. Anyway, my brother used to host a college radio station talk show, and he intereviewed McManus, and got me a signed copy, as he knew I was a fan.

Joseph wrote: "I know he was inspired by Nordic mythology, so why not Finnish as well?"

I think he first fell in love with the Finnish language and used that as a basis for Quenya, but there are other similarities between LOTR and Kalevala, too. And of course the trochaic tetrameter in The Song of Hiawatha is from Kalevala, too.

I have a old 1970's box set of Tolkien that belonged to my father that I keep for sentimental reasons (Unfortunately, I don't actually LIKE Tolkien myself).

I have a pre-1900 edition of Shakespeare's Complete Works minus "The Tempest." Someone took a knife to the book and cut that particular play out - I'm assuming due to its occult themes. It was a birthday present back when I was in High School. I enjoy leafing through it from time to time but it's really too fragile to casually read.

Other than that ... Hm. It would be a toss up between Magic's Pawn and Conflict of Honors. Nothing special about either book really other than they were teenage favorites and I've read them so much the pages are falling out. If I had to pick just one, I'd probably choose Conflict of Honors since I still re-read that one occasionally and I know rereading Magic's Pawn would ruin my wonderful memories of it.

I love all of the Griffin and Sabine books by Nick Bantok. His collage work and the unique format of including letters and postcards has absolutely captivated me. There are 6 books in two series of three: 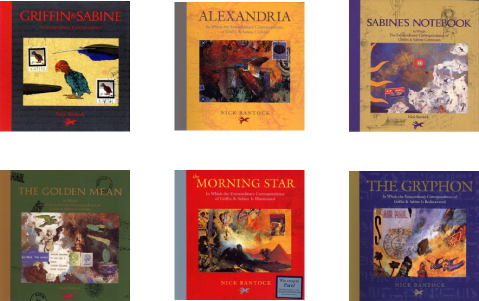 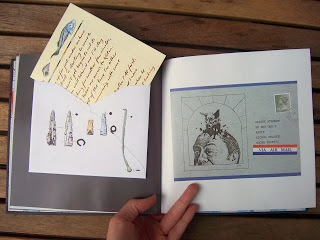 mine are the harry potter books,pride and prejudice,persuasion,tenant of the wildfell hall,jane eyre,,a p j abdul kalams books...i love these... these give me a good feeling whenever i return to them....
a sense of returning home... it evokes many memories..of my schooldays,my college days,my uncles wedding....the memory of discussing and sharing books with friends....it comforts..
i forgot to add my enid blyton books..just seeing the yellow,many times read aand read books brings a smile to my face....

I have a 1967 Golden Square Book of Little Red Riding Hood by Andrew Lang. It is illustrated by Jean Winslow. She tucked little gnomes throughout the drawings. Little Red Riding Hood has never been a favorite story, but I love the pictures. I still search out the gnomes on each page each time I pick up the book.

For me its my old hardback copy of Pride and Prejudice. My great aunt gave it to me when I was a teenager. It was the first book I read voraciously, in a few days I was ready for the next. She started my obsession with books, especially classics, with that little treasure. It's stayed on my bookshelf through 6 moves and several newer copies of P&P.

I've loved scary stories since I was very young. In the summer of 1984, I was allowed to stay up late with my cousin one night to watch Mary Lou Retton compete in the Olympics. After the broadcast, my cousin read me a story called "The Creeping Mold" from Master Of The Dead And Other Strange Unsolved Mysteries. It scared the crap out of me and the book has been one of my favorites ever since. That copy was handed down to me about a year later and I still have it.

My copy of "Where the Red Fern Grows" by Wilson Rawls that I got from my aunt for my ninth birthday. I have read it and passed it around so many times that it's falling apart. It's one of my ultimate favourites, and such a great story.

the one I'd save from a fire would be my first edition hardback Darconville's Cat
physically, value-wise and amazing story-wise, it ticks all boxes!

Darren wrote: "the one I'd save from a fire would be my first edition hardback Darconville's Cat physically, value-wise and amazing story-wise, it ticks all boxes!"

Darconville's Cat is an awesome book. Needs to be much more widely read/known than it is.

I don't know how I'd choose which of my books to save. I'd probably just sit in the library, paralyzed and unable to pick, until I burned up with them lol

I no longer own this book, but owned it as a child more than 60 years ago. It is Honey Bear by Dixie Wilson. The beautiful illustrations are what I remember most. They were the kind of illustrations that inspire the imagination of children. I think it is very rare now. This is a book that should not be lost to history.

I have a 2-volume edition of Little Women that belonged to my grandfather. I don't remember the copyright date, but it is from one of the original printings. The weird thing is that the covers are on the wrong volumes. So either it was originally bound wrong, or it was rebound wrong. My grandfather worked in book printing and special presses, so maybe it was done by him or someone around him? He also designed a typeface that is still in use.

Here is the Wikipedia page for my grandfather. He died when I was about 3 and lived far from us, so I don't have any memory of him, and his daughter, my mother, has also been gone for many years. Like many people, I'm sorry I wasn't more interested in family history while there were people around to tell me about it!

What fascinating family history, Robin! I would treasure that Little Women too. I have a copy that my Aunt gave me that I read probably 100 times that I'm glad I held onto:

I still love the pictures!

The most special book to me is probably a picture book from childhood:
The Wish-Tree
The edition I have, from 1962, isn't listed here, unfortunately. It's beautiful and dark and mysterious with a maze of stairs all in dark blues on the inside cover. It's a wonderful story, and it made the hugest impression on me as a young child!

Terry wrote: "I no longer own this book, but owned it as a child more than 60 years ago. It is Honey Bear by Dixie Wilson. The beautiful illustrations are what I remember most."

Your description piqued my interest in this book. I found an edition on eBay and ordered it to read to the Grandkids.

Great, Joseph! I hope you and they enjoy it!

I love hardback picture books. My favorite is this one for its many colorful and sweet pictures throughout the book

I love the story too:)