Mod
Henry Kuttner's Elak of Atlantis are tales of Sword & Sorcery with a bit of "Mythos" thrown in. Written circa WWII, these followed REH's work in the Weird Tales magazines. Vintage stuff! He also co-wrote with Catherine Moore, an accomplished writer of adventure fantasy too.
Elak Tales
• "Thunder in the Dawn" (1938)
• "Spawn of Dagon" (1938)
• "Beyond the Phoenix" (1939)
• "Dragon Moon" (1940)

Of interest is Andy Beau's post on the old Sword & Sorcery blog: http://www.swordandsorcery.org/swords... 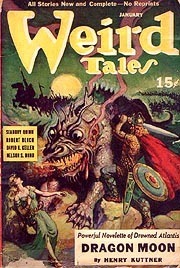 I've got these around here somewhere

Mod
Charles wrote: "I've got these around here somewhere"

You have the Weird tale versions?

I'd like to read this book, but Italian is not currently available in any format. A real shame!

I'm gonna have to locate them among all my freaking books. It'll come to me where they are

Here it is. I've got the collected Elak of Atlantis as published by Planet stories. The copyrights on all stories are as published in Weird Tales. I've not read all of them though. Good time to start, I reckon

Mod
Francesco wrote: "I'd like to read this book, but Italian is not currently available in any format. A real shame!"

Francesco, sorry to hear that. In any event, these groupreads are really flexible. Anything you find that contributes to a fun discussion is fair game. For instance, any other Henry Kuttner short story or book.

Mod
I was very happy when Planet Stories issued the collection; prior to that, I'd had to make do with random individual stories scattered in various 60s & 70s era anthologies. And the Raynor stories were a nice bonus.

i understand, thanks for information.
My english is very bad, then i pray you to be patient if i make some mistake.
However i love sword and sorcery books and i'm happy to follow this great group.

I'm reading the Elak story, "Thunder in the Dawn." Enjoying it. I'm also a sucker for beautiful writing and I came upon the following line, which I just love: "Piercingly sweet, throbbing almost articulately, a harpstring murmured through the gloom."

Just lovely. Sure wish I'd written that line!

Here's news about Elak I didn't know. Steve Dilks, on Facebook, indicated that he'd recently talked to Adrian Cole and that he: "had been commissioned to write new tales of Henry Kuttner's Elak of Atlantis.
In 2007, "Blood of the Moon God" appeared in Robert M. Price's briefly lived re-launch of STRANGE TALES #1. Coincedntally, just this month, a new Cole Elak story, "Witch Queen of Doom Island", has been published in WORLDS OF THE UNKNOWN #1."

Mod
Charles, wow... Thanks for sharing. Has anyone read these?

I haven't read them.

I was impressed with Cole's Kull pastiche, so I think he could nail Elak as well.

I knew the Elak stories were supposed to be influenced by Robert E. Howard, but what I didn't know until I started reading them is that they are at least equally influenced by Lovecraft. A lot of HPL in both "Thunder in the Dawn" and "Spawn of Dagon."

I finished the Elak of Atlantis collection and have put up my review on goodreads: https://www.goodreads.com/review/show...

Mod
I was actually always more familiar with the Raynor stories since they appeared in Echoes of Valor III; the Elak stuff I had to find piecemeal in various Carter or de Camp anthologies, at least until the Planet Stories collection came out.

Reading them, I did find them pretty solidly entertaining. I also think that in some ways, although Howard wrote the first sword & sorcery stories, with Kull & Conan, it was Kuttner and some of the other second-generation writers (would Gardner Fox count?) who really helped define sword & sorcery as a distinct genre.

(Similarly, although Tolkien wrote the first, it was really Terry Brooks and Stephen R. Donaldson and the Dragonlance books that defined the genre of epic fantasy.)

Joseph, I'm sure you're right about writers such as Kuttner and Fox helping to fully define the genre, and by bringing in other elements that Howard didn't use. The buddy feature in Kuttner is a good example. Fox brought in the idea of the barbarian hero as also a wizard, with his Kyrik stories, although he didn't really develop it much. I always thought Kyrik was a forerunner of KEW's Kane.

Mod
I did fill out my Kothar and Kyrik collections this year; really need to add them to the queue.

I enjoyed both. Kothar is more fun to me, but Kyrik has some really interesting ideas, especially the first one, Kyrik: Warlock, Warrior. Fox doesn't go on to develop the 'warlock' part of that in the rest of the Kyrik books and I sure wish he had.

Charles wrote: "Joseph, I'm sure you're right about writers such as Kuttner and Fox helping to fully define the genre, and by bringing in other elements that Howard didn't use. The buddy feature in Kuttner is a g..."

I'd agree with all your points, Charles. Fox didn't make the use of the warlock part of the warlock-warrior combination that Wagner did. Excellent point about Kuttner's developing the 'buddy' aspect of the form, though REH did have Brule in the Kull stories. With Elric's Moonglum later, the buddy seems to emphasize the protagonist's isolation rather than ease it.

Howard wrote: "I always felt like the Raynor stories felt a little like they foreshadowed some Moorcock stuff."

I agree - particularly the similarities between Moonglum and Raynor's sidekick.

Charles wrote: "Here's news about Elak I didn't know. Steve Dilks, on Facebook, indicated that he'd recently talked to Adrian Cole and that he: "had been commissioned to write new tales of Henry Kuttner's Elak of ..."

'Worlds of the Unknown'? A new magazine, eh? Anyone know how I can get hold of a copy of this?

Good old Atlantis! Mysterious,doomed, and the pot from which a lot of some rather interesting people flow over the rim. Edmund Hamilton wrote of a high placed male chasing through time the two who helped doom the isle in their quest for eternity. Robert E. Howard's Kull
was a philosophical barbarian, a very long way from the scientifically
advanced protagonist of the Hamilton tale. Then, there is Elak. He just managed to not be around when his version bubbled. Though he can cut 'n slash with the best of them, there is a dash of the Grey Mouser about him. ( There are a lot more things to do than tangle with wizards, foul beasties, and greedy nobles!)His Atlantis is not that gleaming ivory towered citadel, nor is it the dark forested maze that birthed Kull. It is more like this world's early medieval Byzantium, proud sophisticated and snooty but still filled with Elak's people.

Mod
Cripes, its June 2015, and I just finished Elak of Atlantis. Review to come soon! Over all, better than the Clonan's.

Mod
I liked Elak for the most part. There are flaws, but it is one of the better mashups of horror fantasy (Lovecraft, Smith, Howard mix)... and compared to others, Kuttner executed pretty well. Elak of Atlantis has the four stories, which seem to get slightly better each progression.

VERY late to the party, but my review is here. Elak was OK, but not as interesting as Jirel of Joiry or even Brak the Barbarian. "The Spawn of Dagon" was a lot of fun, however.

Mod
Phil, nice review! I am intrigued with your idea of having a "go-to" recommendation for getting introduced to Sword & Sorcery.

You indicate REH's Tower of the Elephant, is a good one (accessible, nice mix of adventure and weird fiction too).

If I ever need an off-the-cuff-recommendation, I'll be better prepared since I'll follow suit.

Right, accessible is key. Something that at least touches on the major S&S tropes. Action, weirdness, and an evil sorcerer if possible.

"The Tower of the Elephant" is ideal, and I think C. L. Moore's "Black God's Kiss" works well, too. Maybe "Ill Met in Lankhmar," but I need to reread them before I can pick a good Leiber entry point.

I'm a huge fan of Elric, but I think people need to be acquainted with the subgenre before they can appreciate Moorcock's decontructionism.