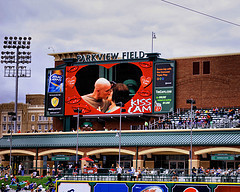 I was "caught" on the Kiss Cam smooching my chica Sunday at a minor league baseball game. Made the big screen at a stadium that holds about 7,000. So, what has been your 15 Minutes Of Fame?

I was once interviewed by the NYC media about airline worker's rights in one of the NYC aiports. I have no idea why. They just stuck a microphone in my face. And another time I was interviewed in the Milwaukee airport about something else. I have to speak with the media about work issues a couple times a year but I usually try really hard to say neutral things and they end up not using my footage/quotes. I don't want to be on tv.

Oh, I also hosted a radio show on which Jesus Lizard made one of their first appearances. That's pretty much my entire punk credibility right there.

I was on CNN when I was running a stop distance test after a major railroad collision in Maryland. Also on camera when I testified at the NTSB public hearing for the same incident.

I only get fifteen minutes?

I was featured in several sweeps stories (as everyone on staff at the news station had been at one time or another) - the one that got the most response/concern was the one in which I was "the date rape victim" on a feature about GHB. My grandmother's friends were calling her.

I was also interviewed once on the virtues of soy milk.


Great picture, Kevin. :) How'd you get that still?

Sarah Pi wrote: "I only get fifteen minutes?"

No, you get a million times that.

Sarah Pi wrote: "I only get fifteen minutes?"

You get eleventy billion!

That's really cool Kevin! What a great romantic memory for you and your lady! My Girl Scout troop was on the Steampipe Alley show way back when (as if anyone remembers that show hehe). It was a kid's game show hosted by Mario Cantone (he was later on Sex and the City).

Hooray! I don't want it for me, just for my songs.

That said, if your fame is judged by how many people you reached, my moment of greatest fame would probably be my appearance as an extra in several scenes of a mid-90s Showtime series called "Ready or Not".

I've played festivals with crowds of 100 000, but I don't know how many were actually listening.

when they put the Kiss Cam up i grabbed my wife and said "stand up and kiss me" which she loved so we kissed and then looked up and then kissed and looked up and finally on about the fourth kiss our friends started clapping and my friend Ty had the great idea to grab my camera and take a shot of the scoreboard. Kim loved the whole thing as i think girls want to know that their guy wants to kiss them spontaneously and in public. am i right about this?

Jim - thanks :)
Kevin - Spontaneous kisses (from appropriate parties) are always welcome, in my opinion. And I was going to ask how you managed to get the photo.

i do, you just can't tell from the picture but she knows

Too much information, Kevin.

Yeah, and it's a good picture.

I don't mean to be an attention hog, but I'm pretty sure KD was talking about MY picture. :)

Okay I reread that bit. Eww. EWWWWW! Cringing (and intrigued).

Take a picture of your tongue, Kevin! I don't believe you.

just stuck my tongue out all the way

read up jim (or i could be doing it towards CHI)

They (Cubs)don't deserve that much attention right now.

Heidi, you seem to be speaking loudly today. Did you go to a loud show last night? That sometimes happens to me too. :)

Sarah Pi wrote: "Heidi, you seem to be speaking loudly today. Did you go to a loud show last night? That sometimes happens to me too. :)"

I think that she might naturally be loud, but that is just conjecture on my part.

That reflection off the top blinded me to the the ... you know.

Sarah Pi wrote: "Heidi, you seem to be speaking loudly today. Did you go to a loud show last night? That sometimes happens to me too. :)"

Nah, Sarah P. Same as I am every day - just easily excitable. :) My stepmom actually used to give me flack for talking quietly. She called me mousy. I just couldn't hear out of one of my ears. I've fixed that.

Can you guys touch your nose with your tongue?

I can wiggle my ears, but my eyebrows move with them, which looks pretty goofy. I think it was part of my poker tell.

I cannot do any of the other things you mentioned.

My parlor is empty of tricks. :(

33 is fantastic...I think we all take up Kevin's mantle and take similar pics.

but not trying to be an attention hog though. right heidi?

hey hides, it was my smooching thread to begin with

you are always welcome. as a matter of fact i just changed the name so you know this to be true

"Heidi has been known to housesit animals of all shapes and sizes."

Noooo! GAH! ::blinks:: Now I'm embarrassed/blushing/ready to crawl back into my shell. :-/

I'm boring! Talk about yourselves... your pets... anything else but me! You guys are interesting peeps! Okay, seriously... I'll leave this thread to everyone else now. Going. Leaving.

I just want to point out that Heidi knows taekwondo and also has an insanely cute dog (who trys to steal grilled cheese sandwiches...:):):)