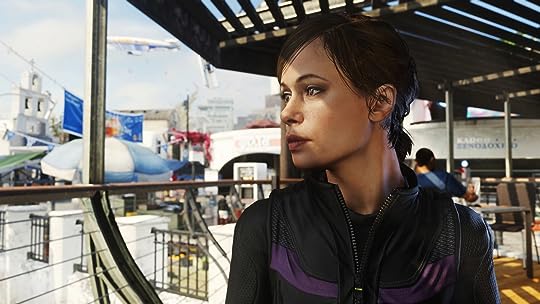 Height: 5'11"
Weight: 135 lbs
Notible Features/Augments: Samantha’s entire right arm (think Edward Elric and you know how far the arm goes) has been replaced by cybernetics. Although usually covered by her sleeves, the metal of the arm can be seen in the hand at all times. Her left eye has also been replaced, and the area surrounding the eye has been grafted with the metal socket. The pinky and ring fingers of her left hand are cybernetic as well. Her left leg is completely cybernetic from the hip socket down, while her right leg is machine from an inch below the knee down.
Clothing: 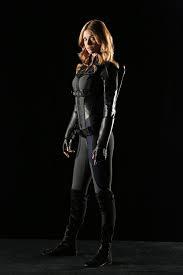 Psychological
Personality: Sam often seems cold and calculating towards others. Whether this is because she may be contracted to kill them later or because she is one third machine, not many know. Characteristic of a sniper, she prides herself on her stealth and deadliness. Her ability to evade detection while picking off her targets or relaying information is important to her, because it puts food on the table and pays half the rent on the warehouse she lives in with her girlfriend, Olivia.
Sam, being ex-military, tries in general to be very neat in how she does things. Her workstation where she maintains her guns and makes ammo is immaculate, the room where she and her girlfriend sleep is spotless, and as much as she hates drawing attention to her prosthetics, she keeps them clean enough that you can see your reflection in the metal.
Likes:
Efficiency
Precision weaponry
Guns
Dislikes:
Rust
Plastic parts of machinery
When her prosthetics glitch out and give more force in a movement than they are supposed to.
Fears:
Home invasion when her prosthetics are disconnected. She can't aim her gun with one arm. 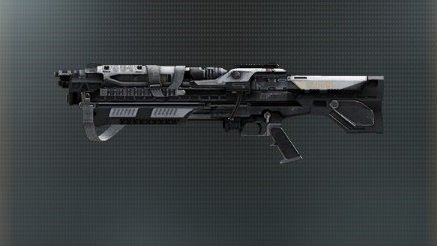 Foregrip- Increased stability when aiming
Shock Absorber- Recoil from firing supressed and the energy absorbed to charge the next shot. 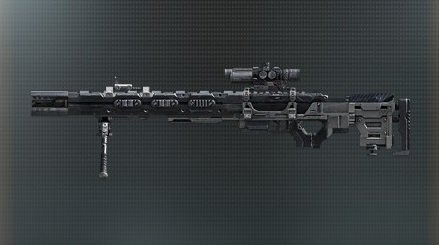 Skill(s):
Energy- As a sniper, Sam has the ability to stay awake for days on end without stimulants like caffeine.
Parkour- There's not always a staircase or a ladder to the vantage point, so Sam trains parkour to be able to get to hard to reach places, which is also useful for escaping pursuers.
Lockpicking- Sam is able to pick some locks.
Abilities: (Any abilities relating to augments)
Palm Print/Retina Replication- Sam's cybernetic eye and hand are able to tap into the systems of palm and retina scanners and mimic what the machine is looking for to pass these scans.
Hydraulic Hand-to-hand- Sam's cybernetic limbs are capable of producing greater force than human muscles, allowing her to generate more damage per hit with these limbs.
Strength(s):
She is one third robot. Because of this, she is somewhat more resistant to physical damage and has greater physical endurance than most humans, as well as being physically stronger.
Sam is athletic. She is quite agile and capable of getting from point a to b without much relative effort on her part. And since she is one third machine, her body has more fuel available from the food she eats.
As a sniper, Sam is quite accurate with her guns.
Weakness(es):
One third of Samantha's body is cybernetic prosthetics controlled by her nervous system and in part her mind. When she is freaked out, panicking, or generally upset, the signals in her nervous system become confused, and her cybernetics may not function properly or respond incorrectly to the signals.
One third of her body is mechanical. Disable that, and she's only got one arm, one eye, and half a leg. She's not going anywhere.
Sam’s railgun holds only one shot at a time. Being bolt action, it is quite easy for her to reload quickly and take another shot, however this does provide a small period of time where the person whose head she might have missed can duck behind something.
Sam's prosthetics can be hacked, or the power source disabled. And when damaged, Sam's limbs need repairs.

Misc
Bio: Sam grew up military. Her father was reassigned a lot, and he took his daughter with him. Her mother had died bringing Sam into the world, and she grew up around men her whole life, with little to no female contact outside of schooling.
After graduating from high school, she decided to follow in her father’s footsteps and join the US military. She was an excellent trainee, operating well in all simulators and displaying advanced capabilities.
On her first deployment, a stealth ops mission to take out a known terrorist dug into an under-developed area of the world, she was on point. All was going well until a hidden trap went off, detonating a ring of explosives on the walls, ceiling, and floor of the hall. Sam took the brunt of the blast, saving her squad, but also suffering debilitating injuries.
Crippled, with only only eye, left arm and half of her right leg, she thought she would be wheelchair bound for the rest of her life when she finally woke up in the hospital. Her father thought so as well, until the nurse he paid to take care of Sam mentioned prosthetics. Her father had lost a finger in battle and had replaced it with a cybernetic prosthetic, so he knew that prosthetics were possible, however, Sam had lost most of her limbs! He feared the grafting operation might be too much and kill her for real, but Sam was adamant. She was too young to be the one everyone felt sorry for, and she wasn’t ready to sit around all day moping, dependant on those around her to do anything.
The surgery was agony. She couldn’t be anesthetized because the nerves had to be receptive in order to connect, but she had to be conscious so the implants could be tested as they went.
Even when the hardware to attach the prosthetics were grafted to her body, the limbs themselves had to be made specifically for her, and there were five years of therapy to develop her use of and tweak the prosthetics. Her mechanic, Olivia Ivanova, was transferred from her station in Russia to maintain Sam’s robot parts, eventually moving into the same house and later the same room as Sam.
Unfortunately, on a military base dominated primarily by men, with Sam and her girlfriend being among the only females on the base, it caused problems. The other soldiers could not handle the only women being beyond their grasp, and Sam's superiors essentially told her that Olivia would be deported if the men of the base did not get some action from the two women. That was the first time Sam became guilty of friendly fire, staging an "attack" that ended in the man taking a railgun round between the eyes. She was dishonorably discharged on suspicion but wasn't convicted.
Family Members:
Burnsti Addam (Father)
Olivia Ivanova (Girlfriend)
Sexuality: Homosexual
Relationship Status: Dating
Theme Song:
Other: 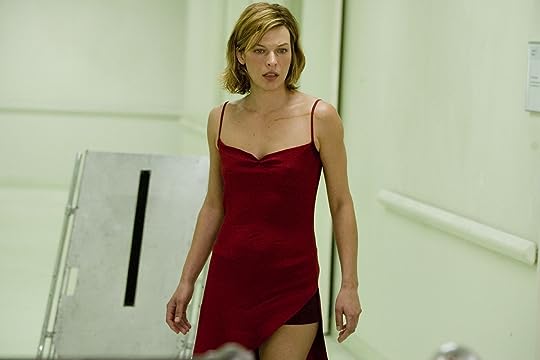 Faceclaim: Mila Jovovich
Height: 5'9"
Weight: 135 lbs
Notible Features/Augments: Her hair. Olivia's hair is naturally a platinum blonde color, however she took a mod so that her hair, while it is still very much alive and growing and mostly natural, changes color according to her mood or desires. It's cosmetic, not functional.
Clothing: 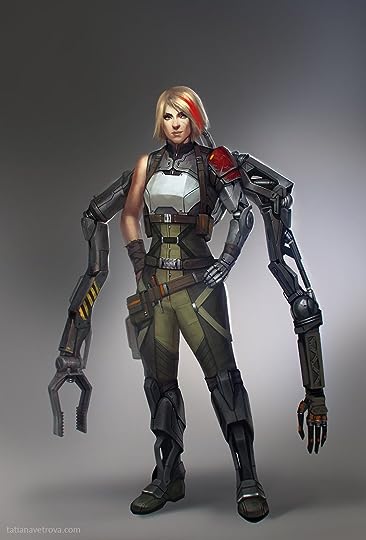 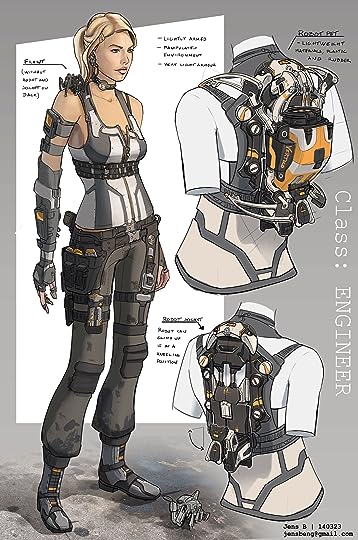 Psychological
Personality: Livi is a born mechanic. Had Sam not come along Olivia probably would have built a boyfriend.
Likes:
Dislikes:
Fears:

Weapons, Skills, and Abilities
Primary: Her exosuit (See Physical Appearance) Originally intended for mechanical work, the extra arms allow Livi to move heavier objects (Such as throwing somebody) or perform finer work that human hands can't be trusted with (Such as disconnecting the power source in Sam's arm without triggering a movement signal)
Skill(s): (Special talents or skills achieved through training or other means.)
Abilities: (Any abilities relating to augments)
Strength(s):
Weakness(es):

Misc
Bio: Livi was born in northern Russia to a vehicle mechanic and his wife. When she was little, her fascination with technology manifested in her constantly bugging her father with “What does that do? How does that work? What is it?” Rather than shoo her away or send her to go play with her siblings, her father showed Olivia how to fix things. As time went on and Olivia entered high school, her engineering mind became clear, as she began taking advanced courses in anything to do with machinery on top of the regular classes. By her senior year, she was a certified engineer in many fields. Unfortunately, with several options comes the dilemma of which one to choose. For all her degrees and all her talents, Livi more often than not went without a bed to sleep in or a meal to eat for several years before an American got wind of her talent for tech. Good insurance, better pay, room and board, job security until the day the patient died, how could she not take the job?
She was not expecting to have to build most of Samantha Addams limbs, but she did it. Over time, she became attached to the American soldier she was charged with literally re-arming.
Family Members:
Peter Ivanova (Father- Deceased.)
Samantha Addam (Girlfriend)
Sexuality: Bisexual
Relationship Status: Dating
Theme Song:
Other: