This topic is about Edge of the Abyss
5 views
Authors' Promo/Blogs/Booksites > What does technological development have in store for us?

What does technological development have in store for us?

Our nature is grounded in the basest of human feelings. Still, until recently I had no idea just how big the problem actually was. I’d spent twenty years of my life writing books about war, space exploration and artificial intelligence, firmly believing that humanity kept progressing morally as well as technologically.
Still, my experience writing LitRPG has forced me to change my mind.

In order for my books to be believable, I spent a lot of time playing online – and the truth lurking behind some of the players’ avatars horrified me. The anonymity of the Internet tends to reveal what’s usually concealed by the veneer of civilization.

As I worked on the Phantom Server and Neuro trilogies, I still harbored some faith in humanity. But as I approached the task of writing Edge of Abyss, I did so in the firm belief that each human heart conceals a slew of vices which can break loose the moment a person tries on a virtual mask and acquires a taste for anonymity and impunity within game worlds.

We might actually invent full-immersion virtual pods quite soon, allowing us to experience whole new worlds first hand. The sheer thought makes my blood run cold. There’s a high danger of us losing what’s human about us, ultimately degenerating and eventually becoming extinct. And when we do realize the danger, it might be too late to do anything about it.

This is basically what my Respawn Trials series is about. 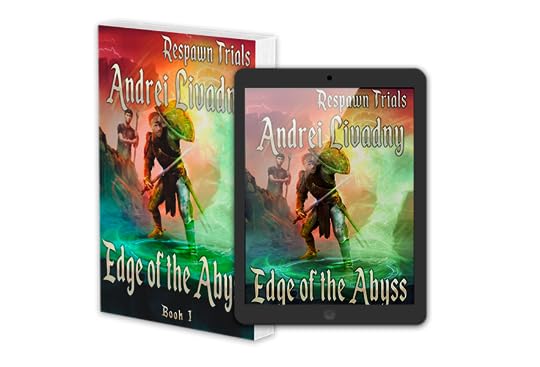 He had thought that he'd already experienced everything that a normal life had to offer. He'd thought he could clearly see what his future holds. Then a sudden phone call changed everything. The Edge of the Abyss was the first full-scale virtual reality, where he was asked to complete a simple task... and which turned out to be far from heaven.
He found himself in a terrifyingly realistic digital world whose rules he didn't know. Seemingly simple tasks suddenly required him to make moral choices - while refusing to do them would take him to places where the barrage of respawns could send one mad...

No. This is LitRPG. LitRPG is a subgenre of science fiction and fantasy which describes the hero's adventures within an online computer game. LitRPG books merge traditional book-style narration with elements of a gaming experience, describing various quests, achievements and other events typical of a video game.

The defining feature that sets LitRPG fiction apart from traditional portal fantasy is its use of interactive gaming language, such as the inclusion of various system messages, players' stats, items' characteristics and other elements appreciated by gamers. The narration in a LitRPG novel has to abide by the rules of a game while filling it with conflict and drama as the hero tries to survive in this new environment.This "book meets game" experience proved to be exactly what many gamers-turned-readers were looking for in a novel.