Mod
For April I will make the challenge easy for those of us who are also doing a challenge in the True Crime group.

April's challenge will be to read a memoir, biography or autobiography about a criminal or crime or anything from the True Crime genre.

You may also continue to do March's challenge.

Hmm not a genre I generally read but I'm thinking of investigating this case David and Goliath: The Bain Family Murders by Joe Karam

The Bain Family (wife, three children ) were all killed allegedly by their own father who then shot himself but only David the son was left as he was out delivering papers that day and he immediately became a suspect and was charged. Many people thought he was innocent but the police claimed they had evidence he did it, and didnt believe his alibi so he was jailed, but people continued to plea for justice.

Anyway dont know every detail except this family was very dysfunctional, the house was burned down, and David got released after they retrialed him, and now, last I heard he is living somewhere in West Auckland. Far away from Dunedin where it all happened.

Oh, but how can that poor guy ever move far enough to get away from such hideous memories?

Fishface wrote: "Oh, but how can that poor guy ever move far enough to get away from such hideous memories?"

Apparently he changed his name, and I think people can somehow put the past behind them without resorting to alcoholism. If he was innocent, or even if guilty and then pardoned then I suppose he has a clean conscience. Besides, if all your family was killed, who else is there left? I don't know about his extended family if he had any.

I guess I need to read the book to find out.

It kind of reminds me of the novel Rebecca, which I've read several times, and wonder ok, the second Mrs De Winter doesn't really know much about Max, just he was married before and his wife died. She doesn't find out till much later her husband killed her. I don't think back in those days people screened their dates for criminal records. But you do wonder about these suddenly single guys on dating sites. What happened to their last girlfriends? Or that new guy in town, what's he doing here, or should we be asking...who is he running away from?

Ack I last saw the David and Goliath book in the fridge library, but it seems to have disappeared, and someones filled the fridge with a whole lot of child abuse memoirs instead. They all have pictures of sad children on the covers.
Would reading one of these count as 'true crime' after all isn't child abuse a crime.

Examples of some titles ... Mummy Knew, and Daddy, Please Don't

Those definitely count as true crime. If you can take reading them!

I dont know if can handle, I find watching Leaving Neverland hard to handle some of the descriptions of MJs crimes. Even though I had read about them before in the book Jordie Chandlers uncle wrote. All That Glitters: The Crime and the Cover-Up

It wasnt like someone went on a rampage and killed heaps of people in a shoot out, and it was over in a couple of minutes. Child abuse is crimes that happen over many months and years and repeatedly.

Yeah, it makes you wonder why the person who left the books in the fridge library got rid of them. Maybe they were a bit much. 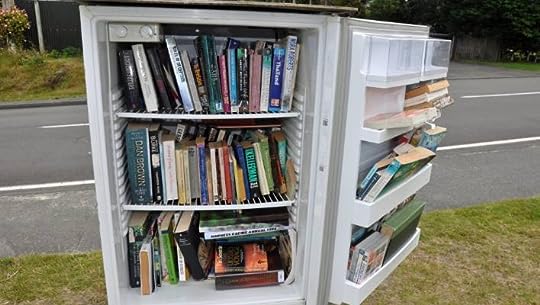 The first time I have seen a fridge library. We have a few free library boxes around the area but no fridges!

It's the perfect use for an old fridge. Totally weatherproof!

Interesting. I've never seen that before.

Read more about it here -- http://booksonthebus.nz/blog/

I feel a little heartless to say a book about a 6-year-old boy who was abducted 40 years was pretty dull, but.... and I dont think this is a spoiler but scroll down if you must....

The boy has never been found and the person they think did it has never confessed so I didnt feel there was any closure at the end of the book. There is really no biographical information of any of the people in the book. It dwells on what little evidence they have and how the parents dwelt with the kidnapping. It just didnt move along fast enough for me and I didnt feel I got to know any of the people.

David and Goliath: The Bain Family Murders by Joe Karam

I got to reading this book finally. Joe Karam the author put Davids appeal to the privy council in London in an attempt to get justice, as he believed David was innocent, but he still spent 12 years in jail before he was finally freed. This book was published 2 years after the murders. It was reprinted in 2007 when David finally was freed. It investigates the case, and the evidence provided, and the false evidence given to the jury to skew the case that the police bungled their securing of the crime scene and didnt do it till three hours after theyd already gome through and messed up the house where the bodies were. It also told how the defense attorney failed to really defend David, since he was a student at the time and wasnt even thinking he was a suspect that needed a lawyer.

The clear motive for the crime and...most people agree that the father did it, was that his daughter told a witness she was moving back home and to come clean about her incestous relationship with her dad, she had been involved in prostitution and was going to change her life by moving back home. The dad snapped and killed everyone except David while he was out on paper run, using Davids rifle (that hed used to shoot rabbits. ) but then shot himself, and left a message on the computer saying 'you were the only one who deserved to stay' .

The police decided to charge David by claiming he did it and tried to frame his father. But he couldnt have turned on the computer as he was out of the house at the time.

Anyway the case was presented in this book and although it repeated a lot and went into great detail, why the Crown decided to charge David is a mystery. He was shocked and traumatised and couldnt remember a lot of what happened that day, yet fully coorperated with the police in answering all their questions.

Also it had some grisly photographs of the crime scene, which I hastily skipped over. We get some of the background and bio of the family...the mother seemed like a dominant woman and the dad, surprsingly, was a missionary in papua new guinea. David really had no motive to kill his family he was a student studying classical music and liked running.

Another unanswered quesrion was why the rest of the extended family did not come forth giving evidence, it was the uncle burning the house down, but maybe they didnt want dirty laundry aired and probably David had no idea his dad was molesting his sister. But interstingly the book The dad was reading at the time of the murders was crime novelist Agatha Christie, called Death is the End.

I tried to read Jesus: The Cold Case but couldn't get past the first few pages of the first chapter because of the snarky tone. If you are going to really investigate this properly, don't be so dismissive of the actual evidence that the Bible gives. Maybe even GO to the places and talk to people, not just rely on scholars, especially athiest scholars opinion.
There must be better books out there on Jesus trial and crucifixion.

Maybe this one, if I can find it in hardcopy...Cold-Case Christianity: A Homicide Detective Investigates the Claims of the Gospels

Yes, Cold-Case Christianity is written from a true investigator's point of view.

Jesus on Trial: A Lawyer Affirms the Truth of the Gospel am going to read this one...even though I recall Jesus didn't have a lawyer..and didn't like them much, cos they were known for lying and not telling the truth.

Did they even have lawyers in those days???

Mod
Not sure what version of the bible this is from and I'm short of time right now to research, but I'll put this here for now:

I have just put Jesus on Trial: A Lawyer Affirms the Truth of the Gospel to the test.

Well, I feel like I've just marked a 3 hour exam with 50 questions to answer in which the author tries to cover every angle.

I'm just going to give it an A-. The only thing is he didn't give any pictures..like exhibit 1 or exhibit 2. He could have shown us the shroud of turin or the empty tomb or some crucifixes. This is from someone who doesn't like gory pictures. But hey this man was crucified! This was more like an rational argument quoting a lot of other authors. With some spiritual experiences thrown in. Lots of Bible quotes. Which is good, after all it's not like CS Lewis who went the other extreme and didn't quote any scripture at all. But this is a lawyer writing so expect a filibuster.

Two brothers are murdered in two separate incidents. One is solved, the other is not. I didnt get a feel for the characters so it was hard to get into this book. The moral of the story is: money doesnt buy happiness.

That's also the moral of In the Best of Families: The Anatomy of a True Tragedy. Both kids lost their minds -- total schizophrenia -- and their mother was trying to treat them with, like, bean sprouts instead of getting them proper medical attention. Let's just say it didn't go that well.