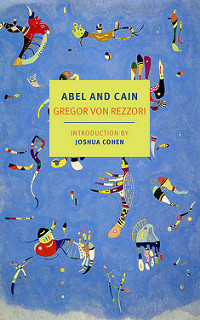 In 1985, Gregor von Rezzori published an English translation of a novel entitled The Death of My Brother Abel. The ambition of the work, certainly the most brilliant and extravagant of Rezzori’s career, was immediately recognized, but the translation was deemed faulty. Now Abel appears in a revised translation along with the prequel that Rezzori promised in its last pages, Cain. Here Abel and Cain are finally united as Rezzori intended, giving readers a chance to appreciate the genius of one of the twentieth-century’s great provocateurs.

The Death of My Brother Abel zigzags across the middle of the twentieth century, from the 1918 to 1968, taking in the Jazz Age, the Anschluss, the Nuremberg trials, and postwar commercialism. At the center of the book is the unnamed narrator, holed up in a Paris hotel and writing a kind of novel, a collage of sardonic and passionate set pieces about love and work, sex and writing, families and nations, and human treachery and cruelty. In Cain, that narrator is revealed as Aristide Subics, or so at least it appears, since Subics’ identity is as unstable as the fictional apparatus that contains him and the times he lived through. Questions abound: How can a man who lived in a time of lies know himself? And is it even possible to tell the story of an era of lies truthfully? Primarily set in the bombed-out, rubble- strewn Hamburg of the years just after the war, the dark confusion and deadly confrontation and of Cain and Abel, inseparable brothers, goes on.

Mod
The publication date for this has changed from April 9 to . . . I'm not sure. Amazon has it for April 30. NYRB's site has it for May 15. I'll go with Amazon for now, because I hope it's sooner than later, and also because May 15 is not a Tuesday.

This sounds challenging. I hope it’s a challenge I enjoy since the two novels make up an almost 900 pgs!

Mod
This one got pushed back to June 4.