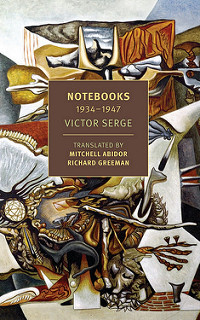 Victor Serge’s Notebooks provide an intensely personal account of the last decade of the legendary Franco-Russian writer and revolutionary. They evoke Popular Front France, the fall of Paris, the “Surrealist Château” in Marseilles, and the flight to the New World. They are replete with vivid life portraits (Gide, Breton, Saint-Exupéry, Lévi-Strauss), and moving evocations of fallen revolutionary comrades (Gramsci, Nin, Radek, Trotsky) and of doomed colleagues among the Soviet writers (Fedin, Pilniak, Mandelstam, Gorky).

Serge’s Mexican notebooks provide a fascinating account of his exploration of pre-Columbian cultures and portray political and cultural figures in Mexico City, from the exiles’ psychoanalytic circle, to painters like Dr. Atl and Leonora Carrington and poets like Octavio Paz. These writings paint a vivid self-portrait and convey the intense loneliness Serge also felt in these years, cut off as he was from Europe, deprived of a political platform, prey to angina attacks, and anxiously in love with a younger woman.

Mod
Publication date on this changed to April 9.

I have not yet read a memoir/travelogue. I don’t feel really drawn to them, but I’m sure I’m missing out on some very good experiences.

Mod
This is out now! I have been reading a bit of it, and I just love Serge's writing, thought process, etc. Even when I don't agree with what he's saying necessarily, he is so thoughtful and articulate and willing to recognize the complexities.