This topic is about Lost Time
63 views
Book Discussions (general) > Lost Time: Lectures on Proust in a Soviet Prison Camp, by Jozef Czapski 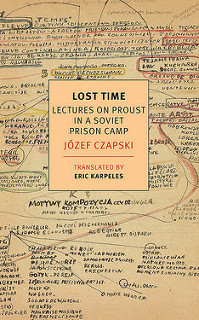 Publication Date: November 6, 2018
Pages: 128
Introduction and translated from the French by Eric Karpeles

During the Second World War, as a prisoner of war in a Soviet camp, and with nothing but memory to go on, the Polish artist and soldier Józef Czapski brought Marcel Proust’s In Search of Lost Time to life for an audience of prison inmates. In a series of lectures, Czapski described the arc and import of Proust’s masterpiece, sketched major and minor characters in striking detail, and movingly evoked the work’s originality, depth, and beauty. Eric Karpeles has translated this brilliant and ­altogether unparalleled feat of the critical imagination into English for the first time, and in a thoughtful introduction he brings out how, in reckoning with Proust’s great meditation on memory, Czapski helped his fellow officers to remember that there was a world apart from the world of the camp. Proust had staked the art of the novelist against the losses of a lifetime and the imminence of death. Recalling that triumphant wager, unfolding, like Sheherazade, the intricacies of Proust’s world night after night, Czapski showed to men at the end of their tether that the past remained present and there was a future in which to hope.

A significant quote from the review: "This serves as an introduction to Proust; no prior knowledge is assumed beyond vague familiarity. In fact, a case could be made for saying that Lost Time’s ideal audience consists of those who have not read Á la recherche..."