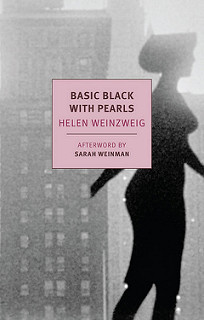 Shirley and Coenraad’s affair has been going on for decades, but her longing for him is as desperate as ever. She is a Toronto housewife; he works for an international organization known only as the Agency. Their rendezvous take place in Tangier, in Hong Kong, in Rome and are arranged by an intricate code based on notes slipped into issues of National Geographic. He recognizes her by her costume: a respectable black dress and string of pearls; his appearance, however, is changeable. But something has happened, the code has been discovered, and Coenraad sends Shirley (who prefers to be known as “Lola Montez”) to Toronto, the last place she wants to go. There the trail leads her through the sites of her impoverished immigrant childhood and sends her, finally, to her own house, where she discards her pearls and trades in her basic black for a dress of vibrant multicolored silk.

Helen Weinzweig published her first novel when she was fifty-eight. Basic Black with Pearls, her second, won the Toronto Book Award and has since come to be recognized as a feminist landmark. Here Weinzweig imbues the formal inventiveness of the nouveau roman with psychological poignancy and surprising humor to tell a story of simultaneous dissolution and discovery.

Maybe I'm just too dense to appreciate this novel, but it's really hard to truly enjoy reading it. I encountered a delusional woman whose memory is also failing her. I'm not sure what's real and what's not, and I doubt her lover is real.

Even though I didn't quite enjoy this book, I love Weinzweig's thoughts and observations about life as we know it.